15 Picturesque Things to Do Near Surabaya Airport

Starting from the Indonesian attractions, we always going to some regions and then more detail to their cities. We visited some other provinces that also famous for natural attractions, like things to do in East Java and many other that followed. But, even though some natural attractions can be found in that exact province, the capital city of it has less number of that type of attraction. You can find some other fun spots though, even though they’re mainly man made.

Remembering its capital city, Surabaya, we already talked about some of its spots inside the Surabaya attractions . But this time, we want to introduce you to the attractions that located near the Surabaya Juanda Airport. So, upon your arrival, you can check these places inside the things to do near Surabaya Airport. Of course, after spending some time to rest first. So here they are : 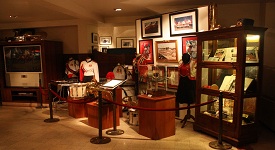 As the first location that located for about 2,1 km from the Juanda Airport, the Sampoerna is actually an iconic cigarrete factory that really famous in Indonesia. To entertain and educate the visitors, Sampoerna built the museum of Sampoerna.

Well in the museum, you can see all the things about the cigarette products, the processing, and many other facts that you should see for yourself. Even though the place is usually busy with some students, this museum can also be a great option in the weekend for the tourists. 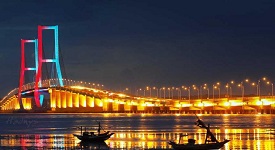 The next one in our list of things to do near Surabaya airport is of course the well known Suramadu Bridge that started to connect the city of Surabaya to the Madura island several years ago. Almost everyone that came in Surabaya city will start to make some plan to come to this place, just for a picture or two.

It’s indeed one of the great bridges in Indonesia, also the biggest one amongst them. Even though the bridge itself looks fantastic in the day, but during the night, you can see much better sight of it. Almost looks a bit like the bridge in things to do in Banjarmasin. 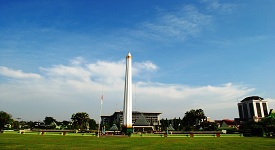 Indonesia is having some monuments that commonly came from the colonial era, when people still struggling for freedom that stole from them during those dark years. You can find them spread in all areas of Indonesia, like things to do in Yogyakarta and also the one in this city. The next one is also the place that has a lot of histories to remember, that sometimes bring tears to our eyes. This is the Monument of Heroes, to remember the struggle of Surabaya youngsters during the Colonial Era.

They fought furiously agains the Deustch that had more improved weaponry and technology. But the spirit of Surabaya people will still burning till the least breath. Find out more story to be told in the monument itself. It’s time to pay some respect. 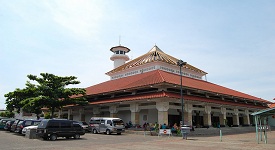 Not only the body that needs a relaxation, but our mind aswell, is needing it more than that. It’s a good pleasure to take a pray at the Ampel Mosque, one of the beautiful mosques in the central Surabaya. People will always fill it in almost every day, either to take a rest or praying. Well it’s a great option for the people that want to attend the pray, at one of the five times.

Whatever the purpose it, you can find this place is the most comfortable mosque. With its beautiful architecture that spoils the eyes, and the temperature that always calming hearts. If you’re a moslem, you should try a pray at this Ampel mosque. Try to find the peace yourself. 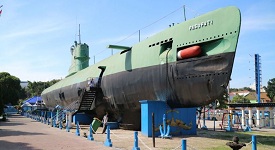 After the museum like Sampoeran Museum above, you can visit the next location in things to do near Surabaya Airport, which is located for about 6,2 km from Juanda, called the Submarine Museum, or Museum Kapal Selam.

This attraction located just beside the river and also near the well known university, Airlangga. Everyday you can see the tourists that mainly came from outside Surabaya, who really want to know what’s inside the submarine. Well, you can see for yourself there, we don’t want to spoil anything. 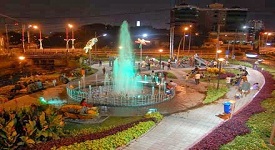 But of course, the must held activity in here is the exercise. So many people will join in that event, having some fun times while making their body more healthy. There are also some community activities in here that also worth noticing. You can even join one of your favorite community if you interested enough.

And then, you can explore wider area of Surabaya to visit these exciting places, including the epic monument that can only be found in this capital city of East java :

So those are the wonderful places or attractons near Surabaya Airport, The International Airport of Juanda. The first thing first you should do after finally arrive to Surabaya, is looking for hotels as the place to rest first. Or maybe you can check some home stays to get much better prices. And then, after some times, you can finally go to the nearest place from the airport, before exploring Surabaya deeper. With visiting these attractions near Surabaya Airport, you can save much times and also tighten your tranportation budget.

30 Romantic Cafe in Bandung for Your Loved One