14 Top Things to Do in Ternate Indonesia #Beautiful 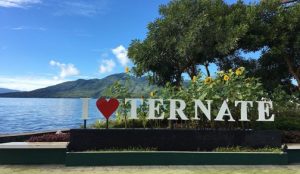 Ternate is an island, which is also a city, in the Maluku Islands of eastern Indonesia. Ternate is the biggest city in North Maluku Province. But FYI, the capital of North Maluku Province is Sofifi, not Ternate. Most of Ternate land can be classified as mountainous and hilly areas with the diversity of altitude between 0-700 m above sea level.

Ternate can be accessed by planes or ships. Routine flights depart from Jakarta, Surabaya, Makassar and Manado to Sultan Babullah Airport of Ternate. While Pelni’s ships stop by at Ahmad Yani Seaport of Ternate twice a week.

Ternate has unique landscape that provides amazing natural spots. The beauty of its nature is breathtaking. Ternate is also famous in the history of spice trade. The traces can be seen in the form of historic buildings. So friends, let’s find out top things to do in Ternate North Maluku Indonesia. 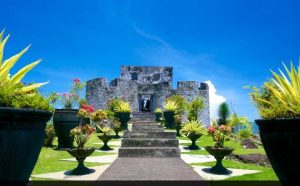 The first top thing to do in Ternate North Maluku Indonesia is observing Tolukko Fort. When Malacca fell to the Portuguese, Alfonso d’Albuquerque ordered his commander Francisco Serrao to sail east to find the spice land. Francisco Serrao finally landed in Ternate in 1512. In 1540 the Portuguese built a fort named St. Luke Fort to control the clove trade in Ternate. In 1610 the fort was taken over by the Dutch who renamed the fort as Holandia Fort. But soon the fort fell into the Sultanate of Ternate who renamed the fort as Tolukko Fort.

Tolukko Fort is situated on a hill, so it’s very strategic to oversee the traffic on the straits among the islands of Ternate, Halmahera, and Tidore. The shape of the fort is unique, it follows the contours of the hill. Tolukko Fort is located at Sangadji, North Ternate District, Ternate City. The entry fee is not specified. Visitors only pay voluntary contributions. It opens 8 am – 5 pm. 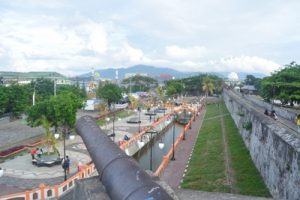 The next destination is Oranje Fort. At the beginning, the fort was a Portuguese fort. Then in 1607 the Dutch came to take over and rebuild the fortress by renaming it the Oranje Fort. The Dutch made the fort as a center of the spice monopoly in Ternate.

Formerly Oranje Fort was on the edge of the sea. But now the fort is in the center of the city due to the reclamation by the government. From the top of the fort, visitors can see the scenery of Ternate City, Maitara island and Tidore island. Oranje Fort is located at Hasan Boesoeri Street, Gamalama, Central Ternate District, Ternate City. It’s free entry and opens 24 hours.

Visit this place : Things to Do in Kediri – Togian Islands Indonesia 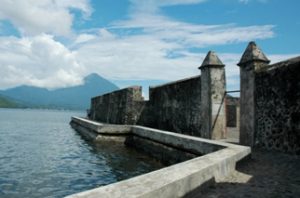 After the Dutch abandoned the Kalamata Fort, the fort became dirty and slum. Even the fort was flooded by sea water due to abrasion. Then the government did a massive restoration so that the fort is back intact without losing its original form. Kalamata Fort is located at Kayu Merah, South Ternate District, Ternate City. It’s free entry and opens 24 hours. 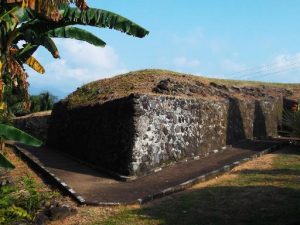 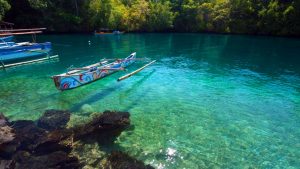 Sulamadaha Beach has crystal clear seawater so that the beach is also known as Glass Beach. If visitors see a boat over seawater, they will be stunned to see it because the boat looks like floating in the air. The seawater is extremely clear and has a variety of fish and coral reefs.

Sulamadaha Beach has black sand that is comfortable to relax. Diving and snorkeling are also fun activities for visitors. The beach is frequently visited by domestic and foreign tourists. Sulamadaha Beach is located at Sulamadaha Village. It’s about 14 km from downtown Ternate or 30 minutes by car. The price of entrance ticket is Rp 2.000 and opening hour is 8 am – 5 pm. 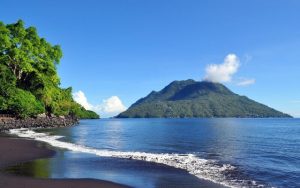 Bobane Ici Beach is famous for the uniqueness of its small black stones. The stones along the beach are formed from the scouring of waves that continually crash the beach. The waves, the sound of the wind that makes the twigs sway, and the chirping of birds will make visitors comfortable here.

There is also a bath at Bobane Ici Beach. Visitors will enjoy the panoramic sea view when submerge in this bath. Bobane Ici Beach is located at Aftador Village. It’s about 20 km from downtown Ternate. It’s free entry and opens 24 hours. 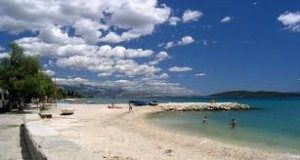 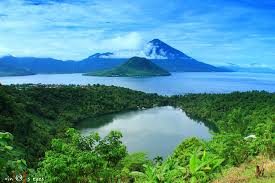 Laguna Lake is an amazing tourist spot. The lake looks beautiful with greenish water, contrast to the nearby blue ocean. The separator of the lake and the sea is only a small piece of land that becomes a road. Although close to the sea, Laguna Lake’s water is still tasteless.

Besides as a tourist attraction, Laguna Lake is also used by locals for fish farming, irrigation and fishing grounds. Visitors can also eat the fish while enjoying the beauty of the lake through a floating restaurant. Laguna Lake is located at Ngade Village, about 30 minutes from downtown Ternate. It’s free entry and open 24 hours. 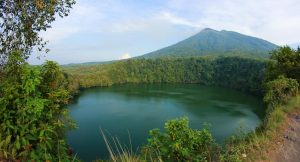 Big Toliro Lake resembles a giant baking dish. The depth of the lake is still unknown. It’s believed the lake is directly related to the sea. Big Tolire Lake is located at Takome. It’s about 10 km from downtown Ternate or 10 minutes by car. It’s free entry and opens 24 hours. 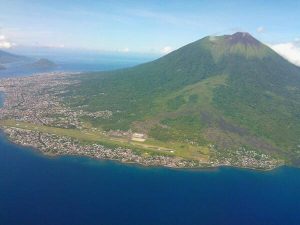 Mount Gamalama is a cone stratovolcano mountain which also serves as a Ternate Island. Mount Gamalama has a height of 1,715 meters above sea level. The mount has been more than 60 times erupted since first recorded in 1538. After erupting in 1775, two lakes appeared, namely Big Tolire Lake and Small Tolire Lake.

Even though Mount Gamalama never stops erupting, it does not frighten the people of Ternate. In fact, Ternate becomes the center of activity in North Maluku Province. Mount Gamalama is located in Ternate Island, Ternate City. There’s no charge to climb Mount Gamalama. But climbers are usually not allowed to climb in odd numbers because the locals believe one of them will get hurt.

Also read: Things to Do in Mount Rinjani Lombok 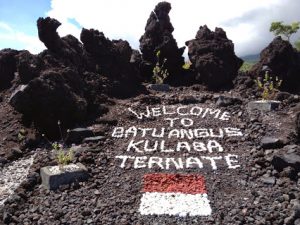 From this place, visitors can see the beautiful view of Mount Gamalama, the amazing blue ocean, and the green Halmahera Island. Batu Angus is located at Lain Street, Ternate City. It’s about 10 km from downtown Ternate. The price of entrance ticket is Rp 10.000 and opening hour is 8 am – 5 pm. This is one of the best things to do in Ternate Indonesia.

Visit this place : Things to Do in Pekanbaru

12. Visiting the Palace of Ternate Sultanate 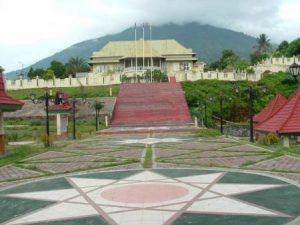 This is one of the best things to do in Ternate Indonesia. The Ternate Sultanate had its glory in the 16th century. It had power in Maluku, North Sulawesi, the islands of the southern Philippines, to the Marshall Islands in the Pacific. The Palace of Ternate Sultanate has walls as high as 3 meters that resemble a fortress. Besides a home for kings and their families, the palace serves as a complex of tombs for the royals. 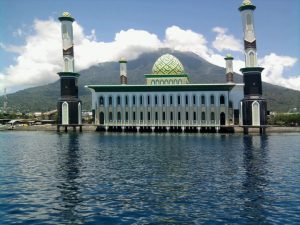 Al-Munawaroh Mosque is the land mark of Ternate that was built on the shore by government. The mosque covers an area of 9,512 square meters and is designed to accommodate 15,000 pilgrims. The construction of the mosque took seven years from 2003 to 2010. The Mosque is equipped with 4 towers as high as 44 meters, two of the towers are indeed built in the sea.

Al Munawaroh Mosque has a natural beauty around the building. Visitors can see the magnificent Mount Gamalama, the cluster of Tidore Island and the coast of Halmahera. Al Munawaroh Mosque is located at Sultan M. Jabir Shah Street, Ternate City. It’s free entry and opens according to schedule of worship. Indeed, this is one of the best things to do in Ternate Indonesia. 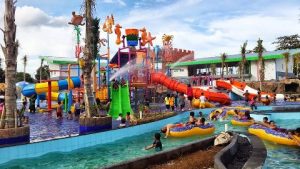 Ternate Wonder Island is a family resort that offers water games. It has a various types of pools, ranging from children pool, current pool, and slide pool. The slide consists of spiral slide and race slide. There is also spilled bucket to cheer up visitors.

Ternate Wonder Island provides a complete range of facilities for its visitors. It has been equipped with rinse room, rest room, gazebo, room for prayer and food court. Ternate Wonder Island is located at Kayu Merah, Ternate City. The price of entrance ticket is Rp 25.000 and opening hour is 9 am – 5 pm.

12 Top Things to Do in Jatiluwih Bali Indonesia

27 Top Things to Do in Halmahera Island...