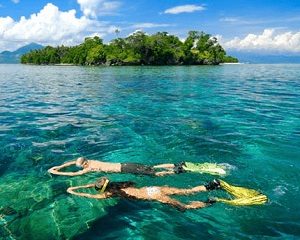 Wakatobi island is is one of the 50 national parks in Indonesia. The name Wakatobi itself is stands for the name of the Islands around the archipelago such as: Wangi-Wangi island, Kaledupa, Tomea, and Binongko island (WA = Wangi-wangi, KA = Kaledupa, TO = Tomia, BI = Binongko.)

The main charm of Wakatobi island is their more than 112 types of coral reefs from 13 families located at 25 points along the 600 km coastline. Wakatobi island is piratically one of the heaven for divers all over the world. Almost in every island that is part of Wakatobi island, the richness of the ocean can be seen. These beauty can also be enjoy while staying at most of their well-known beautiful resort. 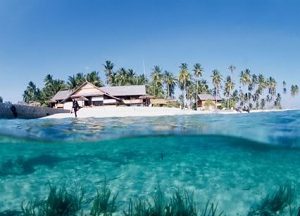 Wangi-Wangi is usually the first island to visit before the other three, locally known as Wanci island. This island has an area of only 23 359 km. Geographically, Wangi-Wangi island has 14 villages and 6 districts. According to census done in 2011, the amount of people in Wangi-Wangi island is up to 23.869 people with 11.647 men and the rest of 12.222 are women.

Wangi-Wangi island in Southeast Sulawesi is surround by small islands such as Kapota, Kampenaua, Timu, Sumangga, and Ottoue. Yet, Kapota island is the only island with people on it. Also, Wangi – Wangi Island pleases you with a very beautiful scenes you have ever seen in your entire life. Thus, it has places that are virgin, natural, and super beautiful. Meanwhile, here are the best places to visit in Wangi-Wangi Island Southeast Sulawesi Indonesia.

The name itself was derived from the local language—Molii means springs, meanwhile, sahatu means a hundred. Just like how the name literally means one hundred springs, there are roughly more than a hundred springs around the coast. Although the water at the seaside is salty sea water, the water from these springs is freshwater.

Sousu beach is famous for its clean white sand. Sousu beach is located in Matahora village, the Southern District of Wangi-Wangi, within more or less 15 Km from the downtown.

Beside doing snorkeling, diving and swimming, you can also enjoy the beautiful scene of Matahora Island when you visit Sousu beach. 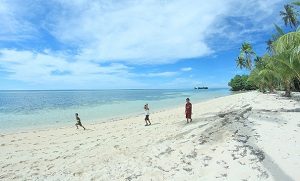 Waha beach is one of the beach in Wangi-Wangi island, locally known as “Pantai Cemara” by the people around.

The position of Waha beach is in the North side of the Wangi-Wangi island, an open beach or the high seas of the Banda Sea.

Just like Sousu beach, this beach is also famous for its white sand. You can enjoy almost everything here, from swimming, snorkling to simply relax under the pine and palm trees. 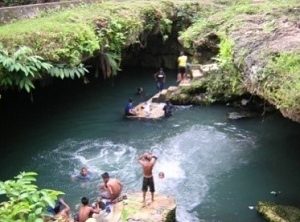 Wangi-Wangi island has many telaga gua or to be simple, a lake inside a cave. All of this telaga gua suprisingly are located in the center of the city.

The great thing about telaga gua in Wangi-Wangi island is that the water of the lake is still clean and so clear for a lake inside a cave. You can take a dip inside of its cold water if you want to or simply enjoy the scene. 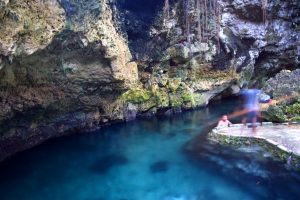 Bat Cave or locally known as “Gua Kelelawar” in Indonesia language, is a cave where a variety of stalactites and stalagmites can be found. It is one of the attractions for those who love hiking.

Bat Cave or Gua Kelelawar is located in Kapota island. To be able reach this spot, you have to ride a traditional boat around more or less 20 minutes from Wangi-Wangi island. The journey continue by a more or less 20-minute walk or ride a two-wheeler with more or less 5 minutes away from the residential areas. 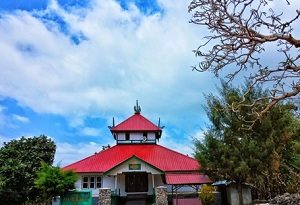 Benteng Liya, also known as Kraton Mosque Liya is a building that consists of four layers with 12 lawa (Doors). The 12 lawa, back in the day, is used to be an exit for the royal society to interact with the surrounding society.

Benteng Liya was built in 1538 AD or Century 15 at the time of Syekh Abdul Wahid, in the top of the hill. The distance of Benteng Liya from the seafront is about 1.5 km. The road to Benteng Liya can be seen clearly form a figure of 9.

From Benteng Liya, you can clearly see the visible sea areas of north, east and south. Inside the fort there is Kraton Mosque Liya within 8 km or 15 minutes from the Capital District. The location of this fort can be reached by two and four-wheeled transport. 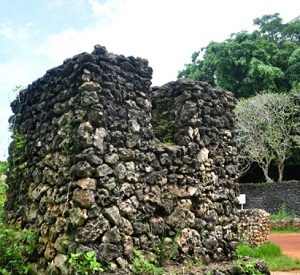 Benteng Tonga Mandati is located in the Mandati village, the district of South Wangi-Wangi.

Benteng Tonga Mandati has a rectangular in shape with an area of more or less 1 hectare. The highest fence of Benteng Tonga Mandarti is around 7 meters, located in the west and south. At the palisades, there are a storage pits for cannon.

How to Get to Wangi-Wangi Island, Wakatobi

There are two routes you can choose to reach Wangi-Wangi island. The first one is by using fast boat from Kendari to Bau-Bau for about 3 hours, then after that, from Bau-Bau to Wanci Island by motor boat about a 9 hour journey before it finally reached the Wanci island. The second route is by using motor boat directly from Kendari  to Wanci island but the trip takes approximately 12 hours. And the frequency of the motor boat for this route is only twice in one week. 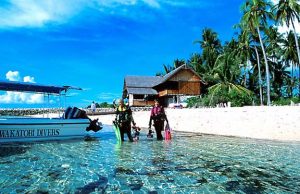 Kaledupa island is located in the south of the Wangi-Wangi island, in the north of the Tomia island and to the west of the Hoga island, Southeast Sulawesi Indonesia. Just like any other island around Wakatobi island Indonesia, Kaledupa is famous for its beautiful ocean. 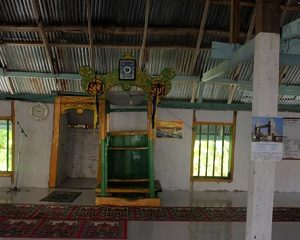 Inside this fort, there is a mosque called Masjid Tua. This mosque is believed to be the embodiment of a mother’s body, which is why no women allowed to use this mosque. Masjid Tua has a measurement of 6.5 x 7 meters.

The distance of Benteng Ollo from the capital of district Kaledupa more or less 4 km, can be reached by using two or four-wheeled vehicles and for more less 15 minutes. This cultural heritage is a perfect tourist attraction for those who love history. 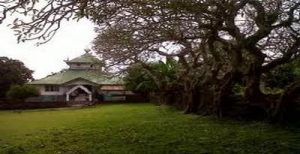 Benteng La Donda or La Donda fort is one of the historical sites belong to Kaledupa society. The fort is located in Kasawari village, the district of South Kaledupa.

Back in the day, Benteng La Donda is never been used as a bastion but simply as a settlements. The layout of the fort is located on the beach, more or less 1.5 km away from the seafront.

From the top of Benteng La Donda, tourists can witness the natural scenery of the south part of Kaledupa. 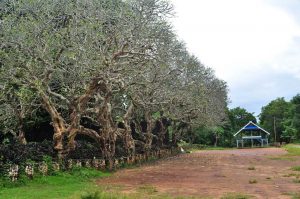 Benteng Kamali is an old fort with natural stone architecture with old cemeteries around it. Benteng Kamali was believed to be constructed in the era of  the Maluku Tobelo kingdom. The fort is located in Palea, Pajam village. To reach this fort, you can use two-wheeled vehicle about 9 km from Ambeua. The fort is a square-shaped area with a size of 20 x 50 meters wide.

How to Get to Kaledupa Island, Southeast Sulawesi

The are two route to reach Kaledupa island. First option, will be from Wanci island using a motorboat with a journey time of approximately 2 hours to Kaledupa island, whereas the other option is using a speed boat will only take 1 hour. 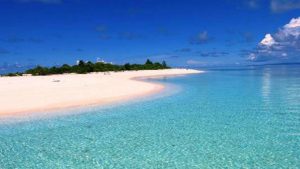 Tomia island is located in the southern of Kaledupa and the northern of Binongko island. Tomia Island Indonesia is a beautiful island with its own nature. Thus, Tomia Island is the best spot for diving, scuba diving, and snorkeling.

Also, it’s a beautiful view ever. You can enjoy the nature, feel the breeze, or just walking on the shore bare foot. Meanwhile, the best places to visit in Tomia island are: 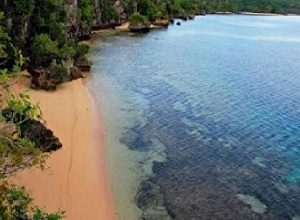 Huntete beach is the longest beach in Tomia island. Huntete beach is famous for its rosy white sand and the long and curved coastal lines. There is not much you can enjoy here but a calm and beautiful beach sight with fishing boats passing by. Huntete’s waves is pretty nasty and therefore it is not recommended to swim on it. 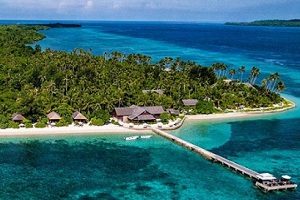 Onemobaa beach is a beach located in the Lamanggau village, Tomia Wakatobi. The colorful coral reef with different kind of fish species, seagrass beds, as well as other marine life in Omenobaa beach seemed to be a paradise for lovers of snorkeling and diving. You can rent a traditional boat (katinting) to travel to this beach, approximately 30 minutes from the capital district. 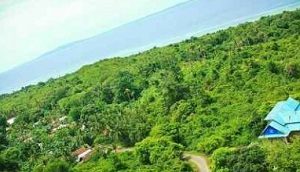 Kahyangan Peak or locally known as “Puncak Kahyangan” is one of highland tour of Wakatobi island Indonesia. Kahyangan Peak is located in Khayangan village of Tomia timur.

It’s only take 25 minutes from the capital district of Usuku Tomia for you to be able enjoy a vast expanse of savanna. 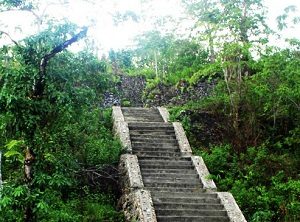 Benteng Patua or Patua fort is one of the cultural history sites of Tomia people. Benteng Patua facing towards Lente’a island in the east of Kaledupa island.

Benteng Patua has five lawa or door that each has its own name and function. There is Hanta Baruga as a rendezvous, quadrangular Makam Tua (Old Tomb), Badili (cannon) and several other tombs.

Back in the day, the fort was used as a defense and settlements. From the top of the fort, tourists can watch the beautiful scenery and Kaledupa island can be seen very clearly from up here.

The route to Tomia island is the same as the route to Kaledupa which use a speedboat from the Wanci island, but it take a longer time, about 2 hours away. You also can use a motor boat directly from Bau-Bau which transport from Bau-Bau to Tomia only 2-3 times in a week. 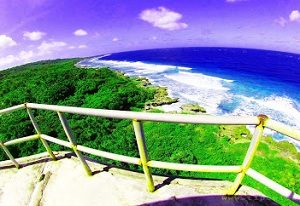 Binongko island is an island in Wakatobi that locally known as “Kepulauan Toekang Besi” or the archipelago of blacksmith. The name “Kepulauan Tokeang Besi” is given because the average of Binongko people is a blacksmith in the Taipabu, Makoro, Popalia and Sowa village. The name also reflects the character of the Binongko people; strong, brave and skilled in warfare.

For tourists, Binongko Island not only offers culture and yet natural panorama and a place where one of the main species in the earth’s oldest living unmolested; hawksbill and green turtles. 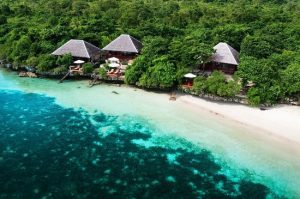 The construction of Benteng Palahidu was made from rectangular shape stones. There is an ancient mosque which the only trace left is masts and the old cemetery that is considered sacred by the local community.

The location of Benteng Palahidu within more or less 2.5 km from the district capital  of Rukuwa and can be reached with two-wheeled or four-wheels vehicles. Not far from Benteng Palahidu, there is the infamous Palahidu beach with its beautiful panorama. From the top of the fort, tourists can watch the beautiful wide scenery.

Benteng Wali is one of the historical heritage sites of Binongko Togo people.

Benteng Wali has a length of 70 fathoms with a rectangular shape and includes Kamali. Kamali itself is still inhabited by the heirs of the royal family. Inside of Benteng Wali, there is also an old cemetery. There are also another old cemetery called the city cemetery, not far from Benteng Wali.

The location of the fort is in the Wali village, Togo Binongko district. With a distance only more or less 9 Km, Benteng Wali can be reached by using two-wheeled or four-wheels vehicles because it is located in residential areas.

The routes to the island Binongko is more difficult than to the three other islands in Wakatobi. The access to the island can be reached from Bau-Bau by motor boat for only every once a week and it takes approximately 16 hours. The other option is byusing body vessel (pompong) from Tomia, it has many frequency than the first option, three times in one week.

Other Attractions in Wakatobi Island Indonesia

Thus, Wakatobi Island Indonesia is another heaven in Indonesia. It has the best places for diving, scuba diving, snorkeling, sunset hunting, and more breeze attractions. 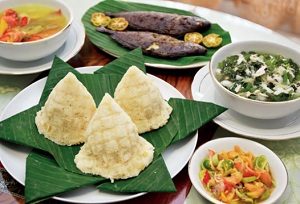 13 Tourist Attractions in Baubau Every Tourist Must...

Top 20 Things to Do in Kendari, Southeast...