Home » attraction » Yogyakarta » Is Borobudur The Largest Buddhist Temple in The World?
Yogyakarta

Is Borobudur The Largest Buddhist Temple in The World? 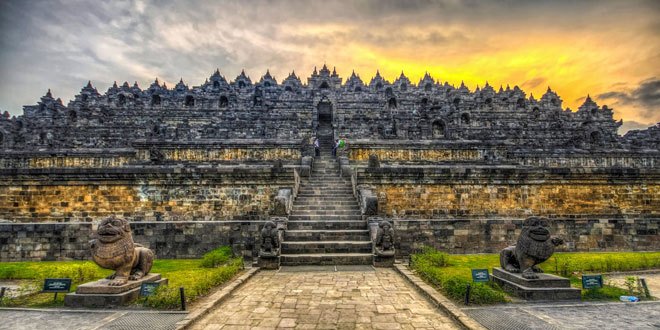 Are you familiar with the place in the picture? Yes, it is the Borobudur temple. Borobudur temple is the famous temple located in Magelang regency, in the southeast part of Central Java, Indonesia. Let’s take a look!

The story behind Borobudur Temple

It assembled in the 9th century during the reign of the Syailendra Dynasty. The design of the temple represented Indonesian indigenous culture of ancestor worship (belief of the dead still exists), and the Buddhist concept due to its power at that time made the inclusion of Gupta art as India’s influence.

Furthermore, the Buddhist conception of Universe which called cosmology also affects the division of the area into three super majestic spheres.

It was made up of three tiers; a base with five large square terraces, a cone with three circular platforms, and with a magnificent monumental stupa at the top.

This monument represents Lord Buddha and considered as an altar place for Buddhist pilgrimage. Due to its price, the monument restored with UNESCO’s help since the 1970s.

While there are 72 openwork stupas around the circular platforms which contain a statue of Buddha on each. In 1991, Borobudur added to UNESCO Heritage list.

The comparison of Borobudur with other temples

You must be wondering the proof why Borobudur become the largest Buddhist temple in the world. We provide a comparison in the term of size of Borobudur with some temples around the world.