15 Things to Do to Celebrate Indonesia’s Independence Day

August such a big month in Indonesia. As you know, Indonesian commemorate the independence day on August 17th which known also as public holiday. Along the road, you’ll see it splashed with red and white flag. Every year Indonesian will commemorate independence day with ceremony and many competition as well. This is became tradition which can’t be skipped, no matter what.

Here is full of explanation about things to do to celebrate Indonesia’s independence day. Take a look. 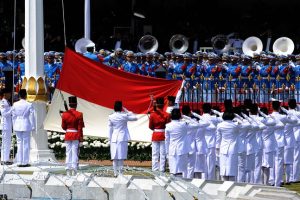 However, flag raising ceremonies will not entirely successful without a back up from students from, armies, and cops. Students who participate flag raising ceremonies comes from many region in Indonesia.They all elected thoroughly with many steps of selection. In usual, the whole ceremony will be broadcast on local television channels. As also there are many Places To Visit in Indonesia

2. Independence Day At the Mountain 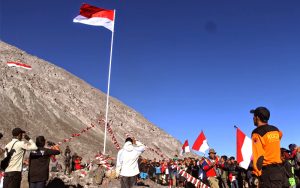 Apart from State Palace, many Indonesian prefer to commemorate independence day at the top of mountain. This one become the coolest parade ever. A day before independence day helded, climbers in majority prep their best also bring out their stuffs during ceremony at the mountain.

Independence day at the mountain became climbers wonts. They tend to go to either the highest or popular mountain in the region to commemorate. The climbers itself comin’ from another region. Yet the main purpose to build solidarity, kinship, and self-belonging one to another.

3. Giving Back to the Community 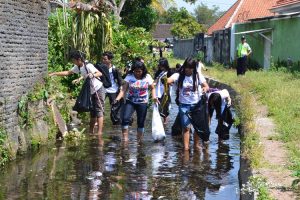 There are many things to do through Independence day, including giving back to the community. This one as the simplest way to show pride in Indonesia. It starts from joining rubbish collection campaign to buying local products. Another ways such donning Batik patterned shirt or dress.

Most of inhabitant also do gotong royong, such a cooperation to clean up those filths on area they occupied. Beside getting the area clear, this simple activity also train inhabitant to keep solid and build kinship in between.

Though giving back to the community became populer since independence day, I’m as Indonesian hopes the inhabitant keeps do the same thing almost in whole year. 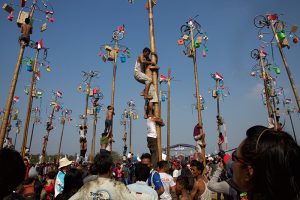 The most popular traditional game in Indonesia is panjat pinang. Although is not as popular as it used to, but panjat pinang is the attractive game must see during independece day.

The pinang (areca) poles will greased and erected in a middle of a field. The contestant will try to climb nearest to the pole to reach special gifts.

Watching this game is so much fun because the pinang extremely slippery make the contestant fall down many times. Even when they almost reach the top, by doing tiny mistake, they absolutely must reclimb over and over again. 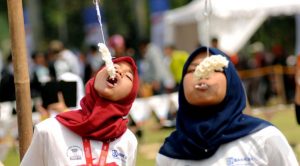 This game also prevalent, especially when you spent your chilhood in Indonesia, this won’t be a new one. Makan kerupuk (crackers eating competition) tremendously popular, whether for Indonesian and non-Indonesian. They’d love to participate themselves in this excitement game.

Makan kerupuk or cracker eating competition came out with rules. The whole participants must put their hands on the back, so they can’t even touch “kerupuk” itself. That kerupuk usually put equivalent or a little bit higher. If you asking why kerupuk have choosen in this game, the main reason because kerupuk is Indonesian traditional snack. Now on, you can also find kerupuk easily in Warung nearby. 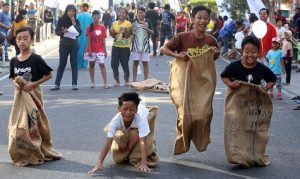 Balap karung was played since 1967, known as an outdoor activities which played in every independence day’s celebration. The rules are very simple. The participant need to be inside a sack, thus hope the tip till the finish line. The first one arriving will be a winner and deserve a medal or something as a gift.

Balap karung isn’t an easy game because all the participants must hopping till the finish line. They cannot walking, yet the karung itself must waist-high. When one participant fall down, they can’t go back to the starting line because they failed. This is also the things to do in Nusa Ceningan. 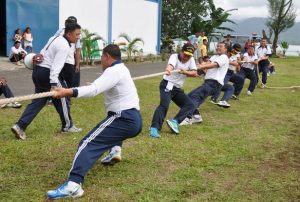 Tarik tambang (tug if war) is a traditional game, brought from the ancient Egypt, Greece, and China. This game will played in group, consist with 5 – 8 people depends on the lenght of the rope.

Tarik tambang also uneasy because both side would try to keep their people stand up. It means if one people from one side fall down, they’ll absolutely lose. Not only that, if one side already reach the line-limit, they also lose. Each group try to defend theirs by pulling back again and again.

You can say tarik tambang as a power struggle. If one group keen to win, they need to issued the whole power they have to pulling back the rope. That’s why most of participant known build-average or super big. 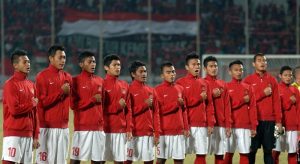 As the time passed by and new music have been released on the music industry, we must keep our national song as number one. This is important to keep that national song alive and stick in our hearts. Beware that national song rarely played in daily life, Independence day is the best best time to recalled where we belonged to and to thrive our nationalist. Indeed, this is also best things to do in Tanjung Benoa.

Well, Independence day not the only one day to sing national song because students whether in elementary, junior, and senior will sing Indonesia Raya song every Monday. But that’s not enough because some of students sang seriously and the rest…(you know what I mean).

Another things to do to celebrate Indonesia’s independence day:

15 Perfect Things To Do in Tuk-Tuk Indonesia

How Does Indonesia Celebrate New Year? Find the...

10 Basic Tips for Travelling in Indonesia for...