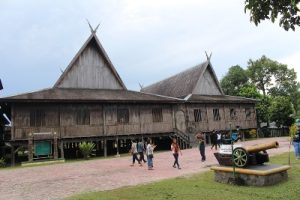 Istana Kuning (Yellow Palace) has been established since 200 years ago, or since 1811. The palace was built by Pangeran Ratu Sultan Imannudin (the 9th Sultan), the ruler of the Sultanate of Kutaringin.

Despite the name of the Yellow Palace, the exterior of the palace is not yellow. The yellow color is found only in items inside the palace such as cabinets, curtains, flags and heirlooms. Yellow, which is also the color of gold, is chosen as a symbol of the Sultanate of Kutaringin because it symbolizes prosperity.

How to Get There
Istana Kuning is located in downtown Pangkalan Bun. It’s free entry. But you need a guide to enter the palace. Opening hours is 9 am – 4 pm. 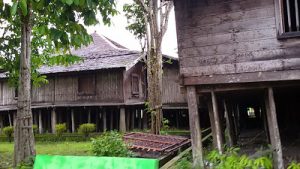 Istana Pangeran Mangkubumi (Prince Mangkubumi’s Palace) is estimated to have been established since 1850. The palace has a shape of house on stilts to adapt to the surrounding environment which is a marshland.

The palace holds many of the heirlooms of the Sultanate of Kutaringin. In addition, there are also furniture and objects that once used by the family of Prince Mangkubumi.

How to Get There
Istana Pangeran Mangkubumi is located at Pakunegara Street, Arut Selatan, Pangkalan Bun. 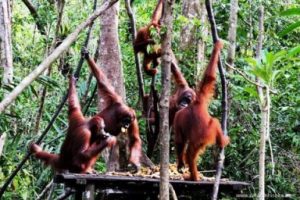 Tanjung Puting National Park is the world’s largest conservation area for orangutans. There are 30,000 to 40,000 orangutans estimated to live here. 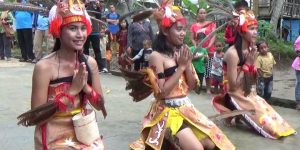 Dayaks are natives of Kalimantan. They have a unique and fascinating culture. Besides that, they also have a distinctive culinary which is different from the culinary in Java. Today visiting Dayak Village has become part of cultural tourism.

Dayaks are friendly to their guests. Visitors will be greeted with traditional art performances. Visitors are also given the freedom to get around seeing their daily life.

How to Get There
Dayak Village is located in Lopus Village, Delang, Lamandau Regency. It’s about four hours drive from Pangkalan Bun. You can see another Dayak Village in Samarinda. Stop by there, you will have lots of things to do in Samarinda. 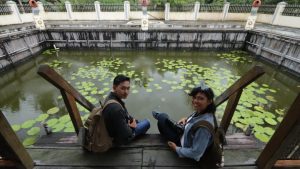 Kolam Pemandian Putri Tujuh (The Bath of the Seven Daughters) is the most mystical historical site in Pangkalan Bun. Locals believe the water of the bath can make a person stay young forever.

The bath is situated not far from Istana Pangeran Mangkubumi, about 100 meters to the south. In the past the bath was used by daughters of Prince Mangkubumi.

How to Get There
Kolam Pemandian Putri Tujuh is located at Pakunegara Street, Arut Selatan, Pangkalan Bun. 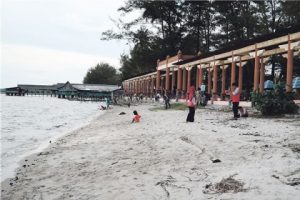 The beauty of Kubu Beach has to be seen to be believed. Its brownish white sand combines perfectly with the calm waves.

Afternoon is the right time to enjoy the atmosphere of Kubu Beach. Accompanied by sea breeze, you can admire the beauty of the sunset with friends or family.

How to Get There
Kubu Beach is located in Kubu Village, Kumai. It’s about 30 km from Pangkalan Bun. The admission is Rp 2,000. Kubu Beach is just one of beautiful beaches in Kalimantan. 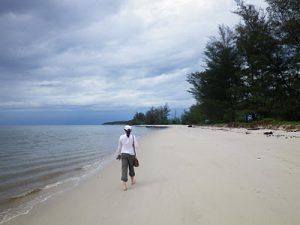 Tanjung Keluang Beach is a scenic beach, is quite popular among the people of Pangkalan Bun for the white sand and turtles. This is because Tanjung Keluang is a peninsula that serves as a natural park to preserve the flora and fauna typical of Borneo.

Tanjung Keluang Beach has a cozy atmosphere composed of cypress trees, green grass, and a clean environment. In addition there are turtle breeding, banana boat and camping ground. 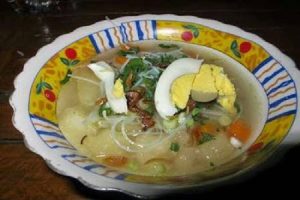 Your visit to Pangkalan Bun has not been perfect if you have not tasted Soto Manggala. It is a typical culinary of Pangkalan Bun which at first glance looks similar to Javanese Soto.

9. Hanging Out at IKC Café 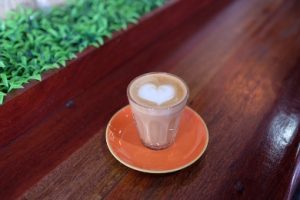 Enjoying a cup of coffee is part of the culture and lifestyle of the people of Kalimantan. There is always coffee on their day, from morning before work until hang out time at night.

IKC Café is where young people of Pangkalan Bun hang out. IKC Café is famous for its coffee that uses local coffee beans. In addition to coffee, they also serve other drinks such as float and squash.

How to Get There
IKC Café is located at Iskandar Street, No. 91, Madurejo, Pangkalan Bun. It’s open till late night. 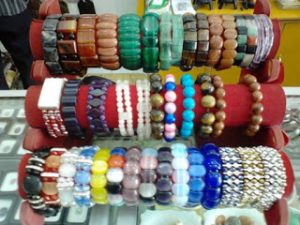 The amethyst is a mandatory souvenir from Pangkalan Bun. Usually the amethyst is formed into a bracelet so it will be easy to wear. Besides bracelets, necklaces and rings are often enhanced with amethyst.

How to Get There
There are many souvenir shops in Pangkalan Bun, one of which is Toko Istana Kecubung at Antasari Street, Pangkalan Bun.

More things to do in Pangkalan Bun

15 Vintage Old Towns in Yogyakarta that Worth to Visit!

Recommended 5 Things to Do in Central Kalimantan

Amazing Things to Do in Tanjung Puting National...

20 Wonderful Things to Do in Palangkaraya Indonesia