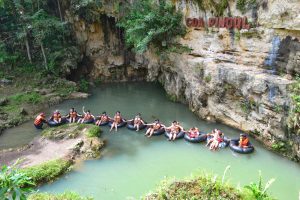 has many famous and phenomenal mainstay tourist attractions discussed by people be it from within the country and even abroad.

The panoramic beauty and history that rests on it is its own attraction. This article discuss specifically about Goa Pindul, one of beautiful caves in Yogyakarta.

Also read:  What to Do in Ratu Boko Yogyakarta

he word “pindul” word is taken by quoting from the legendary story that exists in this place, which is from the words “PIPI” and “KEBENDUL” which are then abbreviated and put together into one word “Pindul”.

You might want to read:  Cultural Things to Do Near Sewu Temple, Yogyakarta Indonesia

To walk along the Pindul cave hall you have to use a swimming tube and special security equipment, such as buoys, so you can freely float above the river flow while entering the cave.

This cave has a length of approximately 350 meters, it can be traced with a normal travel time of 40 to 60 minutes. However, if you want to enjoy and take a few spots, the journey can take longer.

For those who want to go there with children, do not to worry because the flow of water in the Pindul cave is very calm so it is safe for all ages. Pindul Cave is mostly visited during the long holiday season.

There are 3 zones that you can trace in this Cave. Here are some information about each of the zone:

Once entering the Pindul cave, visitors will be presented with a natural landscape in the bright zone of Pindul cave which has an average width between the walls of about four meters. In addition, the height between the surface of the water with the upper wall is about five meters and the depth of the river reaches 1-12 meters.

The natural beauty of the cave in Pindul is very enchanting with the decoration of some active and active stalagmite and stalagmite stone ornaments. The age of this sparkling rock itself varies even up to thousands of years. The rocks are spread along the first zone of Goa Pindul, which seems to welcome the tourists and would make you in awe because of its beauty.

Also read:  What to Do in Yogyakarta for 3 Days – A Guide to Explore The City 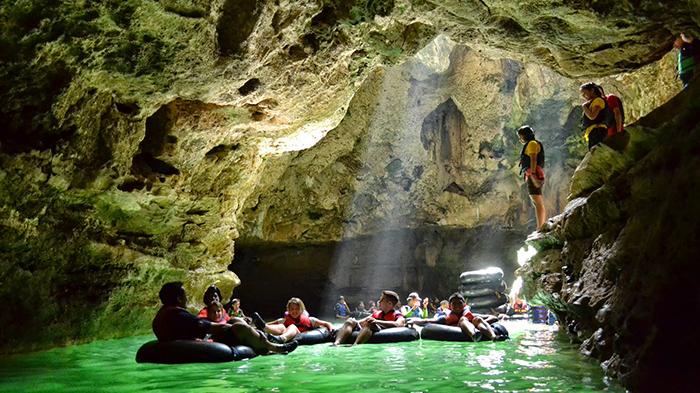 After passing through the first zone, the Mighty stalagmite stone and glittering Pearl stalagtite also welcomed the tourists in the second zone of Pindul caves, namely the dim zone. According to the myth, the mighty stalagmite stones here are said to be able to make adult men become more powerful just by passing especially by holding the stone. This is because there is a hermitage located behind the stalagmite stone.

As for pearl stalagmite stones that are still active here, it is rumored to be able to make adult women become more youthful or even more beautiful if they are lucky to be hit by water droplets falling from the rock.

The zone that is right in the middle of the journey of the cave walk can only be passed by one line of people. Along the walls of this narrow zone is a large Stalagite rock with a width of about five adult arms and a length of about seven meters which is then called the “Soko Guru” which means that the stalactite is the second pillar supporting the hills above Goa Pindul although after being investigated it turned out that this stone had not yet reached the riverbed.

This Stalagtit Soko Guru is the largest stalactite in Goa Pindul and is said to be ranked fourth in the world level. In addition to the soko stalagtit, the inside of the pindul cave there is also a gong stalagite that can produce sounds like the sound of a gong if hit with a hand. But to hit the stalactite it should not be too hard in order not to cause any damage.

Also read:  Why Everyone Should Visit Yogyakarta Indonesia?

Pindul Cave Indonesia review – After passing through the three zones, visitors will enter a zone called the bat zone which is very dark and it is the longest zone in Goa Pindul. As the name implies, throughout this zone is inhabited by thousands of pygmy bats. It’s a bit scary indeed, but you don’t need to worry because these bats are quite tame and won’t attack humans.

This type of bat that lives in the Pindul cave eats insects or mosquitoes as its staple food and they are afraid if the guide directs the lights toward them. However, visitors must be careful not to interfere when passing through this zone and visitors are not permitted to kill or hurt these bats, which the local community calls kampret.

Still in the area of “hidden paradise light”, visitors will enter Goa Vertical which is the core of recreation of this place. Visitors can get off the tire / tube to enjoy the scenery and capture the moment there or play water or swim to enjoy the freshness of river water in the cave.

You can also trigger your adrenaline by climbing the cliffs around the cave wall and jumping into the water from the top of the cliff, the jump and plunge activity is very safe to do because the water depth here only reaches three to five meters. Swimming is carried out while wearing a life jacket to keep your safety.