27 Things to Do in North Maluku #1 Must Visit

In addition to its talented singers and musicians, North Maluku is also renowned for its wonderfully charming and beautiful nature. There are a lot of tourist destinations that should not be missed in your vacation to this province that has its capital in Sofifi City in Halmahera Island. Since there are many destinations, we have narrowed the recommended list below to cover some of them. Here we go to know the things to do in North Maluku! 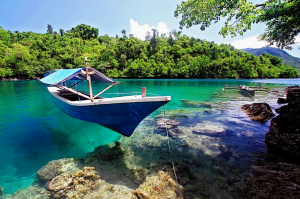 Sulamadaha Beach is infamous for its white sand and the crystal clear water. The water is so clear that the beautiful underwater landscape in Sulamadaha Beach can be seen from above.

Located in Sulamadaha Beach, the beach is only 15 km away from Ternate city. Besides of the clear water, there is also the beautiful Hiri Island not far from the beach.

All of these make Sulamadaha suitable for you who love diving and snorkeling. Also visit and enjoy the Things to Do in Ambon, Maluku Indonesia 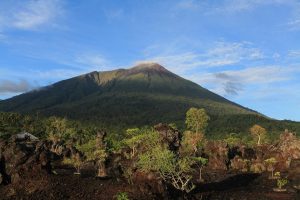 There are many beautiful things to do in North Maluku Indonesia. Regarded by the local communities as a place that has many myths, it does not make Mount Gamalama empty of visitors. The mount can be reached for about 30 minutes from the center of Ternate city.

There are plenty beautiful sight that you can see whenever you go to Mount Gamalama.

From the top of the mount, you can see the clove and nutmeg plantations spread over the surface of the slope, the vast green forest, Halmahera Island, Tidore Island, and the immeasurable blue sea of Indonesia. 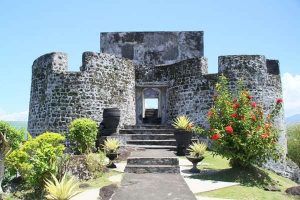 Besides of the famous beaches in North Maluku, the province also has historical sites, such as the Fort Tolukko. Located in Sangadji, the fort is built in 1540 by a Portuguese commander. The fort has been restored several times until now.

Fort Tolukko stands on the foundation of igneous rocks that shape the underground rooms and cellars, the main building and the yard.

A visit to the square fort will bring you to the colonial era. A suitable destination if you love history. 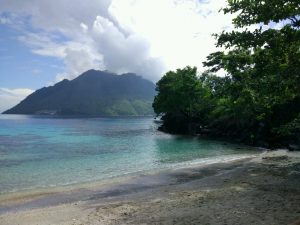 Do you like snorkeling? If yes, then you have to put Jikomalamo Beach in your vacation list in North Maluku. Compared to other beaches in North Maluku, not many people know about the beach, which, of course, make it as one of the best snorkeling spots in Ternate.

Here, you can see the wonderful underwater landscape. Remember, do not touch any coral reefs that become the home of the fish, since it will halt the growth of the reefs.

Jikomalamo Beach is a beach that has clean white sand that stretch for about 100 meters. Located in a rather hidden bay that faces directly to Hiri Island makes the beach has fascinating sight of the island. According to the locals, the name Jikomalamo is chosen from the name of a village in Hiri Island. 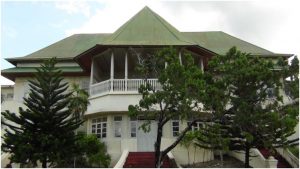 This is the building remains from Ternate Sultanate that is functioned as a tourist attraction on Sultan Khairun Street, Bukit Limau, North Ternate District. The octagon-shaped building resembles a sitting lion with its two front legs face the sea.

Kedaton Sultan Ternate Museum has many collections from geological, ethnographical, archaeological, numismatic, philological, technological, arts, and pottery. The museum has artifacts from Ternate Sultanate such as the crown, the golden throne, armaments, traditional ceremonial tools, and a handwritten Al-Qur’an. Among those artifacts, there is a unique one which is a 500 years old crown that has hair that can grow just like human hair. In order to cut it, Istampa ritual needs to be held in Ied Adha holiday. 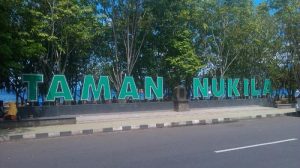 The name of Nukila Park is taken from the name of a Ternate woman that once fought Portuguese colonialism. She is the first Indonesian woman warrior, as written on the inscription in Nukila Park. The park is officially opened by the Mayor of Ternate, Dr. H. Burhan Abdurrahman S. H. in November 30, 2014.

Nukila Park is located on the shoreline that has shady trees, a comfortable destination for your vacation. The park also has a children playground and a wide pedestrian path. Nukila Park makes the Ternate City fresh and lovely. 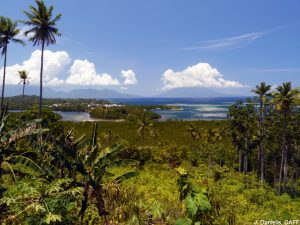 Halmahera Island is not another beautiful island in North Maluku. In northern region of the island there are famously beautiful coral reefs with the biodiversity of the underwater ecosystem.

You can also see two different types of white sand, the smooth and rough sand. The scenery and the clear water are very suitable for relaxing, swimming, or snorkeling with the lovely family.

In Halmahera Island, Tobotobo Marine Park is the real underwater paradise that should be visited because of the beauty of the underwater ecosystem. Besides of swimming and sunbathing on the shore, walking the island is also an interesting activity since it will allow you to enjoy the view of the island more.

Jailolo Bay, or also known as ‘the Pearl in North Maluku’, is located between Ternate Island and Halmahera Island, or precisely in West Halmahera. You can see a lot of underwater creatures like sharks, turtles, octopuses, and various fish. In Jailolo Bay, you can also find a wide variety of coral reefs and some endangered mollusca.

In addition to the underwater view, Jailolo Bay also offers the view of the magnificent Mount Gamalama. It is worth to note that every May or June, the West Halmahera government always sets Jailolo Festival, an event that is attended by 100 domestic or international divers. 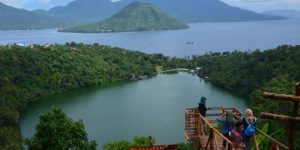 The captivating Laguna Lake is situated in Ngade Village, South Ternate District, around 20 km from Ternate City. The lake is also known as Ngade Lake because of the location of the lake in Ngade Village.

Laguna Lake makes proud of its virgin nature that surely will enchant you. You will also see the exotic landscape of the area surrounded by the green hills, the blue sea, and the fascinating mountain.

Laguna Lake is also used by the locals for freshwater fish cultivation and irrigation of the plantations. Another important thing in a lake that you can also do in Laguna Lake is fishing. You can swim in the lake as well. 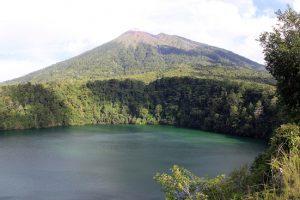 The lake or precisely the lakes are located on the Mount Gamalama’s slope. Tolire Lake has two separated lakes that are called by the locals as Big Tolire Lake and Small Tolire Lake. The distance between the two lakes is only 200 meters away.

The Big Tolire Lake has a shape like a giant pan. Even though the lake is inhabited by various fish, oddly enough, the locals do not dare to catch them or to swim in the lake.

They believe that the lake is also inhabited by demon crocodiles. It is also believed that if you throw something to the lake, no matter how strong you throw it, it cannot touch the water of the lake. 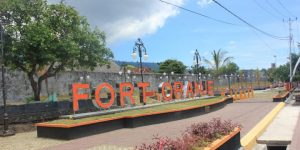 Fort Oranje (Fort Orange) is obviously named according to its bright orange color. There is a story of behind Fort Orange. Once, Fort Oranje was built by the Dutch colonial government to be the headquarter of VOC in Maluku. After the independence, the fort was used as Indonesian army and also police force headquarter. 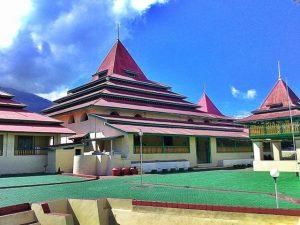 Ternate Sultanate Mosque is only 100 meters away from Kedaton Ternate Sultanate. The mosque is built in 1606 with complex stones formation and mortared by a mixture of kalumpang trees’ bark.

The shape of the mosque is a square, imitating the shape of the pyramidal roofs that consist of 360 carved bars each roof, same as the sum of days in a year. 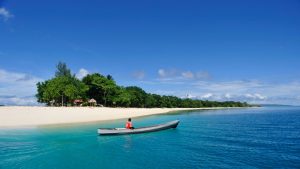 Morotai Island has a rather long history. It was used as the war quarters of Japan in World War II.

Thus, it is not uncanny that there are hidden underwater treasures from the remains of the sunken ships around the island.

The island is out of the ordinary because the surface of the island is quite flat. The panorama of Morotai Island is astonishing. That makes the island one of the favorite destinations in North Maluku. 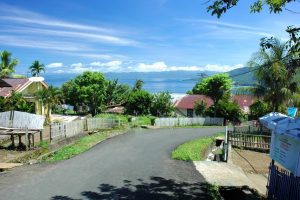 Marikurubu Village is located in Mount Gamalama. To reach the village, you need to climb the mountain for about 4 hours.

Along the way, you can see clove plantations that has one of the oldest clove tree in the world, which is 400 years old. The old tree can produce up to 400 kg cloves a year.

Beside of the clove plantations, you can also enjoy the view of the magnificent Mount Gamalama. You can see sunrise and sunset moments from the amazing spot on the mountain.

Other interesting destinations in North Maluku that you can also visit:

Those are things to do in North Maluku that should not be missed in your vacation. Visiting those destinations will give you unforgettable moments in North Maluku.

10 Mandatory Things to Do in Kebumen

10 Things to Do in Sumenep (Breathtaking Scenery)

Put these 3 Best Lakes in Ternate on...

Have Fun in These 4 Beaches in Ternate...

8 Top Rated Things to Do in Tidore

14 Top Things to Do in Ternate Indonesia...

27 Top Things to Do in Halmahera Island...