14 Top Things to Do in Ambon, Maluku Indonesia 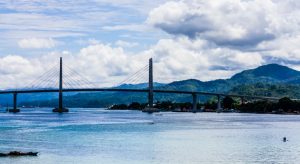 Ambon is the capital of Maluku Province. The city is one of the main cities in Eastern Indonesia. Most of Ambon’s land area can be classified as hilly to steep slope. Ambon consists of 5 districts. They are Nusa Niwe, Sirimau, Ambon Bay, Baguala Bay and South Leitimur .

Ambon can be accessed by planes or ships. Most of the big cities in Indonesia have direct flights to Ambon while ships embark from major seaports such as Jakarta’s Tanjung Priok, Surabaya’s Tanjung Perak and Makassar’s Soekarno-Hatta. Pattimura Airport and Yos Soedarso Seaport are the main entrance in and out of Ambon.

Ambon is known as a city with a cluster of islands that provide unique characteristics since its territory consists of mountains, hills, coastal, and marine. This characteristic provides opportunities for much natural potential that can be used as a tourist attraction. Ambon also has a historical and cultural value that its heritage to this day can be seen by visitors. So guys, let’s find out top things to do in Ambon Maluku Indonesia. 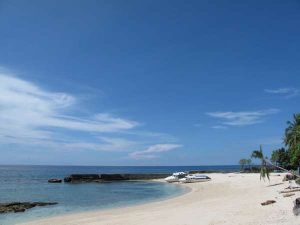 The first top things to do in Ambon Maluku Indonesia is visiting Santai Beach. Meanwhile, Santai Beach literally means a beach for relaxing. The beach has everything visitors need to relax such as white sand on a gently sloping coastline, sea breeze, and calm waves rushing through the crystal clear sea. The color of the clear blue sea water is really amazing. Laid on the edge of the beach, under a towering coconut tree will be very enjoyable.

Not only relaxing on the shores of the beach, visitors may also dive or snorkel. Santai Beach has underwater beauty that is a pity to miss. There is diving and snorkeling equipment rental here. Santai Beach is located at Latuhalat Village, Nusa Niwe District, Ambon. It’s about 17 km from downtown Ambon or takes around 30 minutes by car. It’s free entry and open 24 hours. 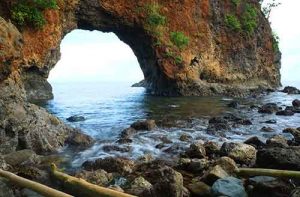 Next things to do in Ambon Maluku Indonesia is getting lost in Pintu Kota Beach. Pintu Kota Beach has a cliff that jutted into the sea and hollow in the middle. The hole is uniquely shaped like a gate. This gate-cliff becomes the icon of the beach. If visitors climb to the top of the cliff, they can see the scenery of Banda Sea which has the deepest abyss.

Pantai Kota Beach is not too wide. The beach is filled with rocks and white brownish sand. At the time of high tide, most of these rocks are submerged in sea water. Some spots for snorkeling or diving also exist in this coastal area. Pantai Kota Beach is located at Airlouw Village, Nusa Niwe District, Ambon. It’s about 17 km from downtown Ambon or takes around 45 minutes by car. The price of entrance ticket is Rp 4.000. It opens 8 am to 5 pm. 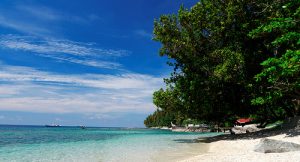 Namalatu beach has crystal clear water that is decorated with rocks. Besides enjoying the beautiful panoramic view, a lot of other activities can be done by visitors such as fishing, swimming, snorkeling or diving. The beach has many types of fish with different shades and colors. Visitors can also enjoy the beautiful sunset view.

Namalatu Beach is filled with shady trees that provide protection from the sun. Some trees even jut toward the beach that gives a unique impression of a beautiful to be captured in camera shots. Namalatu Beach is located at Latulahat Village, Ambon. It’s about 17 km from downtown Ambon. The road is good, can be passed by cars or bikes. The price of entrance ticket is Rp 3.000. 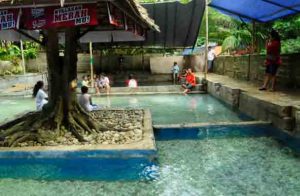 Hatuasa hot spring began when a TNI retiree intended to open a sago tree plantation in his land area in the 1990s. When he dig the land, suddenly the hot springs appeared. Since then he opened a hot spring bath named Hatuasa. The temperature of hot spring reaches 50-70 celsius.

According to some visitors, soaking in Hatuasa hot spring bath can be a health therapy and also cure various diseases. In addition to healing, visitors will surely feel refreshed and recovered from fatigue after soaking here. Hatuasa hot spring bath is located at Tulehu Village, Ambon. It’s about 30 km from downtown Ambon or around 1 hour by car. The price of entrance ticket is Rp 10.000 for adults and Rp 5.000 for children. It opens at night. 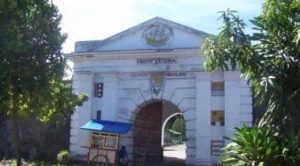 Victoria Fort was built in the colonial period by the Portuguese in 1575. The fort then was taken over by the Dutch who used it as a center of government at that time. In addition, the fort was also used as a place to hoard spices from eastern Indonesia region.

There are a number of cannons with large size at the entrance of the Victoria Fort. While inside the fort, visitors can see a map depicting the development of Ambon city from time to time and a lot of Portuguese and Dutch heritage objects. Victoria Fort is located at Sirimau, right at downtown Ambon. It’s free entry and opens 8 am to 5 pm. 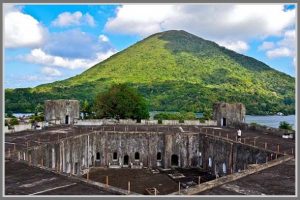 Originally, the place was a Portuguese warehouse to store spices. After the Dutch came and occupied Ambon Island in 1605, they defeated the Portuguese and took over the warehouse. Governor-General Jaan Ottens turned the warehouse into a fort in 1637.

Amsterdam Fort consists of three floors with watch tower on roof top. In front of the fort, there is an inscription from the Ministry of Education and Culture which describes the history of its construction. The fort stores hundreds of years of war gear and pottery. Amsterdam Fort is located at Hila Village, about 42 km from downtown Ambon. It takes 1 hour by car. It’s free entry and opens 24 hour 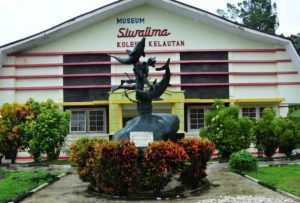 Siwalima museum was founded on November 8, 1973 and was inaugurated on March 26, 1977. The word Siwalima comes from two words, namely Siwa and Lima. Siwa means nine, which means a collection of 9 kingdoms in the southern region of Maluku. While Lima means five, which means a collection of five kingdoms in the northern region of Maluku.

Siwalima Museum consists of two buildings. The first building is the marine museum, containing the marine history of the Ambonese people, sea objects and sea animals, as well as various properties related to marine life. The second building is an ethnographic museum that keeps all things related to the culture of the Moluccas. Siwalima Museum is located at Dr. Malaiholo Street, Ambon. It’s about 5 km from downtown. The price of entrance ticket is Rp 2.500 for adults and Rp 1.500 for children. It opens 8 am to 5 pm. 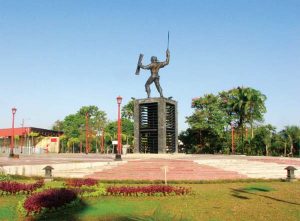 The arrival of the Dutch to Maluku was not merely a matter of trade but also a desire to dominate. This had generated a great deal of resistance, which in turn led to the heroic and patriotic spirit against the Dutch. The war was led by Thomas Matulessy who was also known as Kapitan Pattimura. To commemorate the courage of Kapitan Pattimura, the government built a Pattimura Monument.

The old Pattimura statue was built in 1971 and has been moved to the Siwalima museum. The new replacement statue was made of bronze with a height of seven meters, a weight of nearly four tons and cost Rp 2 billion. The statue was inaugurated by the Mayor of Ambon on May 15, 2008. Pattimura Monument is located at Intersection of Slamet Rijadi Street, Imam Bonjol Street and Pattimura Street, Ambon City. It’s free entry and opens 24 hours. 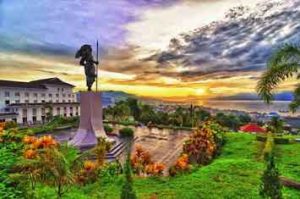 From this monument visitors can see the view of Ambon City. The view is even more beautiful when the night comes. It was said that at the time of building the monument, Christina’s statue was difficult to put because of lack of balance. The statue finally stood in balance after being directed to Banda Sea, where her corpse was buried. Martha Christina Tiahahu Monument is located at Karang Panjang, Ambon City. It’s right next to Maluku’s regional parliament. It’s free entry and opens 24 hours. 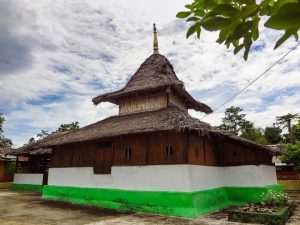 Though renovated many times, Wapauwe Mosque is still original. The renovation did not change the core shape of the mosque at all. The mosque also has the oldest hand written Qur’an manuscripts in Indonesia that was made in 1550. Wapauwe Mosque is located at Kaitetu Village, Regency of Central Maluku. It’s about 1 hour by car from downtown Ambon. It’s free entry and opens according to schedule of worship. 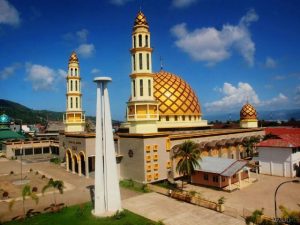 Al Fatah Grand Mosque is the largest mosque in Maluku. It was built in 2011 on government’s grant land to anticipate the increasing number of worshipers especially on Friday and other Islamic holidays. The mosque has a land area of 5.000 square meters and a building area of 2.200 square meters. 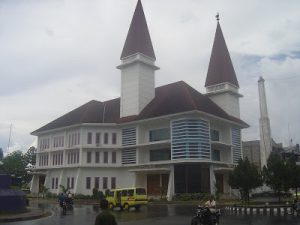 Silo Church is one of the oldest churches in Ambon, Maluku. The development of its congregation began in the 17th century. The church was first built in 1918 with a simple shape, wall of sago sheath and roof of sago leaves. Due to the growing population of the congregation, in 1923 a better Silo Church was built in new location and equipped with bell tower.

Silo Church has been renovated repeatedly. The last time the church was renovated to repair the damage caused by the sectarian riots in Ambon. Silo Church is located at Am Sangaji Street, Ambon City. It’s free entry and opens according to schedule of worship. 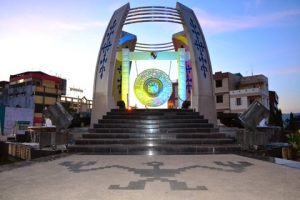 The World Peace Gong was built to restore Ambon from sectarian violence. It was inaugurated on November 25, 2009 by the 6th Indonesian President, Susilo Bambang Yudhoyono. The Gong is about 2 meters in diameter. Its surface has pictures of flags of states around the world, its central part has the symbol of the world’s major religions such as Muslims, Christians, Hindus, Buddhists. In addition, the symbol of Pancasila was clearly visible at the top of the buffer gong.

The World Peace Gong is situated inside the Pelita Park which is right in the center of downtown Ambon. The place also has a museum that tells the destruction of Maluku because of sectarian riots. The World Peace Gong is located at Sultan Hairun Street, Uritetu, Ambon City. The price of entrance ticket is Rp 5.000. It opens after 10 am. Ok guys… Now you know the best things to do in Ambon Maluku Indonesia. Let’s give it a try!

14 Things to Do in Kediri Indonesia #Top Natural Spots

19 Top Things To Do in Labuan Bajo Indonesia

Wonderful Things to Do in Ora Beach Maluku

Beautiful Things to Do in Kai Island –...

16 Best Beaches in Ambon You Should Visit