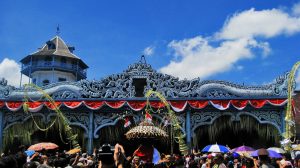 Surakarta is a city in Central Java province of Indonesia. This city is commonly known as Solo. The city borders Karanganyar Regency and Boyolali Regency to the north. Towards the east and west, Surakarta borders Sukoharjo Regency. Meanwhile at the south of the city is Sukoharjo Regency. One of the most famous feature of the city is the river of Bengawan Solo that flows at the eastern side of Surakarta. The city itself is known as the birthplace of current Indonesian President, Mr. Joko Widodo. Mr. Widodo also served as the mayor of Surakarta from 2005 until 2012, when he was elected as the governor of Jakarta.

Surakarta itself is a former royal city, known as Surakarta Hadiningrat. There are 2 royal enclaves that are housed in Surakarta, the Kasunanan Kingdom and the Mangkunegaran Principality. The Kasunanan Kingdom was the true heir of Mataram Sultanate which ruled the island of Java from 16th century until late 17th century. The Sultanate moved its court to Surakarta in 1745, but due to internal intrigues, rebellion and manipulative policy from the Dutch East Indies Company or VOC, the Sultanate was divided into 2 in 1755. The first is the Kasunanan Kingdom based in Surakarta, led by Pakubuwono II and the other is led by Prince Mangkubumi, who later become Sultan Hamengkubuwono I that is based in Yogyakarta and become Yogyakarta Sultanate.

Later in 1757, another prince named Raden Mas Said formed Mangkunegaran Principality due to his disappointment with the King. Raden Mas Said was a patriot that staunchly rejected cooperation with VOC, while the King prefers to collaborate with VOC.

After Indonesia’s independence in 1945, the two royal houses of Surakarta lost their autonomy due to political reasons. Nowadays, Surakarta is one of Central Java’s economic center with a population of about 800,000 people. You may also visit: Places To Visit in Indonesia – Things to Do in Solo

Surakarta is well renowned for its soft spoken and charming people. It is recognized as one of the least westernized city in Central Java. Surakarta City itself is a charming city with many things to see and do in the city area as well as its surroundings. Here are some of the attractions in Surakarta. 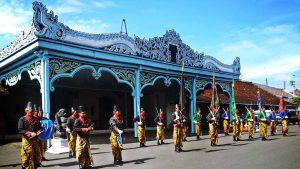 This palace is built by Pakubuwono II when the court was moved to Surakarta. The palace is also known as Keraton Kasunanan. It is a large and beautiful palace. The palace was built in 1744 after the riot known as Geger Pecinan, which destroyed much of the old royal city of Kartasura. The architectural style of the palace is a combination between the traditional Javanese style and the classical European styles.

The palace itself is huge and is divided into several compounds, namely Alun alun Lor, Sasana Sumewa, Siti Hinggil, Kamandungan Lor, Sri Manganti, Kedaton and Magangan. The palace complex is surrounded by a defensive wall called baluwarti with height of three to five meters and thickness of 1 meter.

To these days, the palace remains the official residence of the Sultan and his relatives. The royal family resided in Kedaton compound, which is off limit to the general public. The palace is the landmark of Surakarta and is equipped with various facilities like museum as well as an art and cultural center.

This palace is also known as Pura Mangkunegaran. The palace was built in 1757. After ending his struggle against VOC through Salatiga Treaty, Raden Mas Said established his seat of power west of Pepe River and become Mangkunegara I.

The palace is built in a similar structure to the Keraton. The palace is also the official resident of Mangkunegaran princes to these days. The Mangkunegaran palace has one of the largest audience halls, that covers an area of 3,500 square meters and capacity of up to 8,000 people. In fact this awe inspiring hall is considered as the largest audience hall in Indonesia.

Same as the Kasunanan Keraton, this palace also sports a museum as well as an art and cultural center. It also has a library with huge collection of books. Entrance to the palace will cost IDR 15,000 and there is an additional fee of IDR 3,500 for taking pictures.

You may also want to read: Airport in Bali, Indonesia – Amazing Places To Visit in Bali 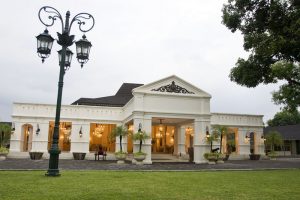 The Batik Museum is located on Surakarta’s main street, Jalan Slamet Riyadi. The museum houses 10,000 pieces of batik, which are part of Santosa Doella’s private collection. Santosa Doellah is a batik magnate and the owner of Batik Danar Hadi. This is the largest batik museum in Indonesia.

The batik collection displayed here comes from various cultural influence and period, from authentic Javanese, Chinese, Indian and even colonial Dutch. You can find interesting pieces of Batik which depicted scenes from the fairy tale of “Snow White” and “Little Red Riding Hood.”

Right next door to the museum is a batik shop and a restaurant that offering traditional Javanese as well as colonial Dutch menus. At the back, visitors can see the making process of traditional batik from start to finish. The museum building was a mansion of Javanese noble family from the 19th century. The building combined traditional Javanese architecture as well as classical European styles. Entry to the museum will cost you IDR 25,000. The entry fee includes a guided tour of the collection. The guided tour itself is conducted in English. 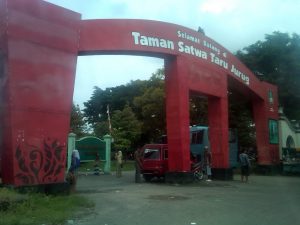 Jurug Zoo is one of the tourist objects in Surakarta city. It is also known by the name of Taman Satwa Taru Jurug. The zoo was built in 1878. It offers a beautiful place for relaxation.

The zoo offers a natural tourism concept. Inside the zoo you can find various species of animals and plants. Inside the zoo, visitors will be pampered by pathways that are surrounded by big trees that provide many shades. Within the park, you will find troops of monkeys as well as birds from various species. 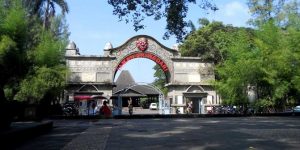 Here in Sriwedari Park you can see many of Javanese art and culture. The arts performed here are wayang kulit, which is a puppet show as well as wayang wong or wayang orang, which is a Javanese theatrical dance. The performances usually take place at night. Besides you can also see children playground and a food court that is filled with restaurants serving traditional Javanese food. Additionally, you can also find an amusement park with live band every night inside the park. That’s the things to do in Surakarta Indonesia. 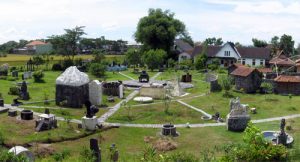 This is a Hindu temple complex that is located in the village of Sonosewu, about 5 kilometers east of Surakarta. This is also a location of Kundalini yoga center. The yoga center has water meditation pools and many indoor and outdoor meditation spaces as well as a Javanese style pendopo.

The temple is still under construction, but the yoga center itself is a sight to see. Kundalini yoga enter houses 50 miniatures of sacred sites from all over the world. Enchanting things to do in Surakarta Central Java Indonesia. 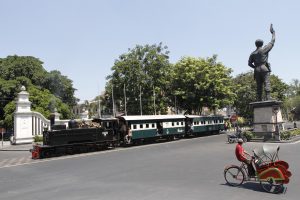 This word sepur kluthuk is Javanese translation of steam train. The Jaladara steam train is a tourist train operated in Surakarta. The train is powered by C1218 steam locomotive. The train runs along the route between Purwosari station to Solo Kota station, which is about 6 kilometer. The railway track parallel along the main road of Surakarta, Jalan Slamet Riyadi.

The train itself consisted of C1218 steam locomotive that pulls along 2 wooden cars that was originally made in 1920s. The wooden cars, numbered CR16 and CR144 are made from Javanese teak wood and each can fit 36 passengers. The total passenger capacity of the train is 72 persons. The steam locomotive is fueled by teak wood. For its running distance, the train require 4 cubic meter of water and 5 cubic meter of wood. The train also runs through some of the landmarks of Surakarta, like Loji Gandrung, Ngarsopuro, Keraton Solo and Gladak. 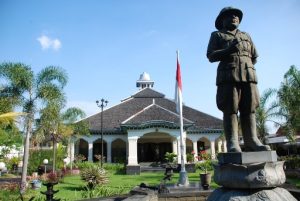 The next things to do in Surakarta Indonesia. Loji Gandrung now is an official residence of the mayor of Surakaarta used to be a mansion belongs to a Dutch businessman named Yohanes Agustinus Dezentye. The mansion was built in 1823.

The building is built in European architecture style. At the front of the building you can see a statue of a man wearing a hat and holding a tobacco pipe.

The name of the building originated from the word loji which means a big building and gandrung, because the building wasoften being used as a place to hold dance ball, places to visit in Surakarta. 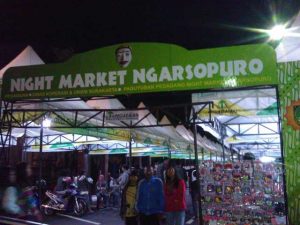 Surakarta attractions, Ngarsopuro is a great place for you to enjoy the evening in Surakarta. Here you can buy various handicrafts and unique souvenirs from Surakarta as well as having unique culinary experience of Surakarta.

The night market is only open during the weekend. It was first being established by Joko Widodo when he was the mayor of Surakarta. In 2008, Joko Widodo renovated the market in the area and held the night market along jalan Diponegoro. The market itself only opens for 4 hours a day during the two days of the weekends. The opening hours are fro 6 P.M. to 10 P.M. In Ngarsopuro night market, you can also see cultural shows that is being held in the middle of the market.

Surakarta is a city that is charming and unique because of its strong Javanese culture, the Central Java. Also, there are many things to do in Surakarta Indonesia This makes Surakarta a very enjoyable place to visit and spend your vacation. If you are traveling to Central Java or wants to have an experience that is enriching both physically and culturally, then Surakarta is the right choice. So what are you waiting for? Come and let’s hang out in Surakarta.

Top 7 Beaches in Kebumen for Relaxing Your...

Let’s Witness the History of Indonesia Through 4...