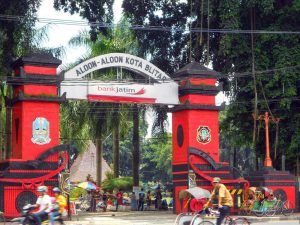 Blitar can be accessed by buses or trains. Normally, trains depart from Jakarta, Surabaya, Yogyakarta or Malang will stop by in Blitar, either Blitar City or Regency of Blitar. Economy or business class is available for passenger’s option.

Because Blitar is situated on the slopes of Mount Kelud, it has amazing panoramic view. Besides its nature, Blitar is well known as a place where Soekarno, the 1st President of Indonesia, was buried. So guys, let’s hunt for the best things to do in Blitar.

1. Visiting The Tomb of Soekarno 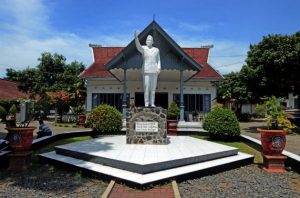 Every day, hundreds of pilgrims come to the tomb of Soekarno. The charisma of Indonesia’s Founding Father still charms many Indonesian people. Soekarno passed away on June 21st, 1970 in Jakarta. The ruler at that time decided to bury him in Blitar, next to his mother.

The tomb of Soekarno was designed according to Javanese architecture, which was Joglo. Tall pillars and large pool adorn the tomb. Besides that, museum and library that documented all the things about Soekarno, from books to photos, also equip this tomb complex. The tomb of Soekarno is located at Bendogerit, Sanawetan District, Blitar City. Pilgrims only need to pay parking fee. 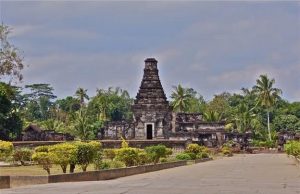 Penataran Temple was discovered by Sir Thomas Stamford Raffles in 1815. The temple is situated on the slopes of Mount Kelud. It’s a temple compound that is also a remarkable example of great architecture of East Java. The temple has multistoried structures with the most sacred place is located in the backyard.

Penataran Temple was a place of inauguration of Kings. The legendary Palapa Vow was uttered by Gajah Mada at this temple too. The temple compound consists of main entrance, the Grand Pavilion, pavilion terrace, Brawijaya Temple, Dragon Temple, Temple Master, the body of the main temple, and sacred bathhouse. Penataran Temple is located at Penataran Village, Nglegok Distric, Regency of Blitar. It’s 12 km north of Blitar City. 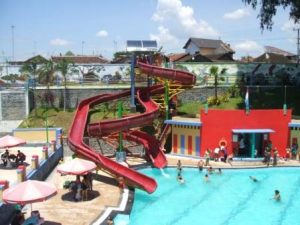 Sumber Udel Water Park has the largest pool in Blitar City. The pool is divided for children and adults. Besides that, the water park has Olympic – size pool, river pool, water boom, giant bucket, big fountain and water sliding. Sumber Udel Water Park also has complete facilities for visitors such as restaurant, café, locker room and clean bathroom. At holiday, there will be show performing group bands to entertain visitors. 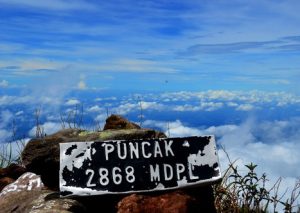 Mount Butak is a popular destination for mount climbers. The mount has the height of 2,868 meters above sea level. It’s a stratovolcano type, therefore it’s perfect for beginners. The mount has a beautiful tea garden on its slope that is under the management of PTPN XII Sirah Kencong. The panoramic view will feast the eye of climbers.

Mount Butak is located at Semen Village, Gandungsari District, Regency of Blitar. Before climbing Mount Butak, climbers need to register themselves at registration post. The officers will ask the copy of ID. The fee for registration is Rp 7.000 per person. The average time to climb the mount is 10 hours.

Read this article : Mountains in Indonesia 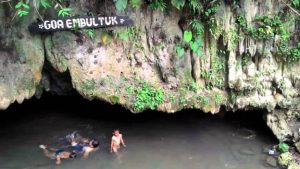 Embultuk Cave is one of the caves that is still natural. It’s 1.3 km in length and 3 meters in height. The cave is flooded by some 3 meters of water in certain spots. The sound of running water will calm the hectic mind. Stalagmites are also hanging beautifully that serve as a gift to our senses.

Visitors need tour guides, who are locals, to explore Embultuk Cave because the cave has not been equipped with sufficient light. Illumination will come from the oil lamps belong to tour guides. Visitors need to prepare spare shirts too, just in case they have to change their wet clothes. Embultuk Cave is located at Tumpakkepuh Village, Bakung District, Regency of Blitar. 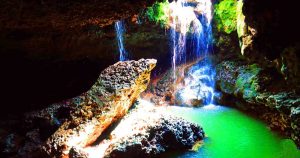 Luweng Cave is around 30 meters in depth. It’s also flooded so visitors may swim in the cave. Visitors are advised to wear anti-slip shoes or sandals and to bring spare clothes. Many locals around the cave offer services as a tour guide. Luweng cave is located at Ngrejo Village, Bakung District, Regency of Blitar. 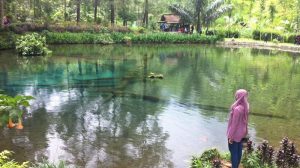 Rambut Monte Lake has peaceful panoramic view. Situated in reservation area, the lake has clear water so visitors can see the bottom of the lake which is green tosca. A lot of god fishes live in the lake. Legend said that Mbah Monte, who was guardian of the place, cursed his pupils into god fishes because they disobeyed his commission. Since the fishes are believed the incarnation of human, fishing is strictly forbidden.

Rambut Monte Lake is near tea garden Sirah Kencong. Visitors may stop by on their way back after enjoying the beauty of the lake. Rambut Monte Lake is located at Krisik Village, Gandusari District, Regency of Blitar. The price of entrance ticket is Rp 3.000 for adults and Rp 2.000 for children. Parking lot is also available for visitors. 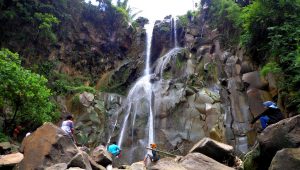 Jurug Bening Waterfall has the height of 50 meters. The path to the waterfall is still in dirt. Along the way visitors can enjoy birdsong, the roar of waterfall, the beauty of bamboo plants, fresh air, and the green scenery. The waterfall has moderate stream that is split up by the rocks.

Jurug Bening Waterfall is located at Purworejo Village, Wates District, Regency of Blitar. The site is still not equipped with proper facilities. Visitors have to park their vehicles at the nearest local’s house. Nevertheless, local community welcomes visitors in warm hospitality.

You may also read: Waterfalls in Indonesia 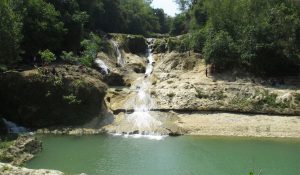 Tirto Galuh Waterfall is very unique. The rocks around waterfall resemble rifts so that produce streams. Visitors can see many small waterfalls on one site that are 3-5 meters in height. Visitors may also climb to the top of waterfall and will find small ponds. But they are advised to be cautious about the slippery rocks and the deep ponds.

Tirto Galuh Waterfall has proper facilities such as parking lot, food stalls, bathrooms, even flying fox.. The site is still under development by local government. Tirto Galuh Waterfall is located at Sidomulyo Village, Bakung District, Regency of Blitar. The price of entrance ticket is Rp 3.000. 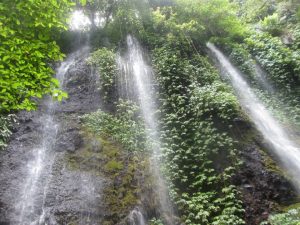 Lawean Waterfall is relatively not popular as a tourist destination. Therefore the waterfall still has natural look. It is hidden inside Kawisari Plantation. The waterfall is easily accessed from the path. Visitors only need to walk 100 meters to see the waterfall. Indeed, people love to come here during holiday seasons.

Lawean Waterfall has a few streams flowing on the rocks and vines. Visitors can see that the water is so clear and also breathe in the fresh and cool air at this site. Lawean Waterfall is located at Semen Village, Gandusari District, Regency of Blitar. Also, this is one of the best things to do in Blitar, East Java Indonesia. 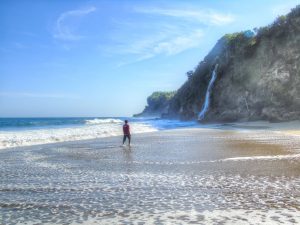 Umbul Waru Beach has different beauty from other beaches. The beach is surrounded by the cliffs and the waves are relatively big. Therefore low tide is the right time for visitors to enjoy the beach. There is also waterfall on the beach that flows directly to the ocean.

Umbul Waru Beach is still natural. It’s not fully developed as a tourist destination. There are no food stalls around the beach so visitors might be better to bring their own food. Umbul Waru Beach is located at Sidomulyo Village, Bakung District, Regency of Blitar. 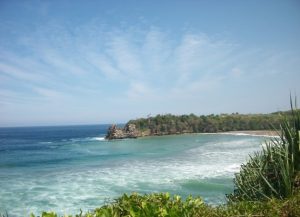 Serang Beach has flat contour and beautiful white sand. The waves are relatively small. So the beach fits for sport activity, swimming, or sun bath. Besides that, the mix of hills and beach gives amazing panoramic view. The beach is also the place of Larung Saji, an ancient ritual of Javanese people.

There are fishermen villages around the beach. Visitors may observe the way fishermen catch lobsters or fishing by traditional method. The beach is always crowded on weekend. Serang Beach is located at Serang Village, Panggungrejo District, Regency of Blitar. The price of entrance ticket is Rp 3.000. 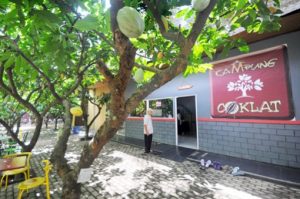 Chocolate Village is a must visit place for die-hard fans of chocolate. The chocolate plantation has been transformed to a chill and cozy place for hanging out. Wooden tables and chairs add the sense of natural. Visitors will enjoy sitting and talking under the shade of chocolate trees.

Chocolate Village combines fun and education. Visitors may learn the A-Z of chocolate manufacturing. The place also has playground for children. Therefore it’s fit for all ages. Chocolate Village is located at Plosorejo Village, Kademangan District, Regency of Blitar. The price of entrance ticket is various, from Rp 15.000 – Rp 50.000, depends on the package. 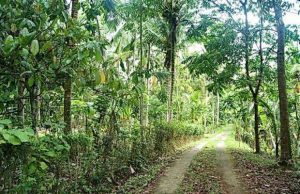 Blitar is well known as a star fruit producer. Visitors can feel the atmosphere of star fruit plantation at Karang Sari Agrotourism. Here visitors may pick the star fruits themselves. Then the staffs will weigh and set a price. The star fruit of Karang Sari has sweet and fresh taste.

Karang Wisata Agrotourism was built in 2007. The area is covering some 5 hectares. Karang Sari star fruit, as an indigenous variety, has been registered as biological wealth of Blitar. Karang Wisata Agrortourism is located at Cemara Street, Blitar City. The price of entrance ticket is Rp 10.000. Alright folks. You already know the top things to do in Blitar, East Java Indonesia. Let’s go there!

12 Top Things To Do in Sabang Indonesia (#No. 1 is Perfectly Beautiful)

How Long Does It Take to Hike Mount...

Where to Go to Surabaya During Summer Vacation:...

What to Do in Balekambang Beach : Amazing...

All You Need to Know Before You Hike...

The Remarkable Things to Do Near Gunung Kawi

The Reasons Why Should Visit Surabaya Before You...

Searching for The Best Chinese Restaurants in Surabaya...