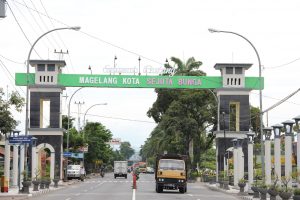 Magelang is one of main cities in Central Java. It’s literally located in the central of Java. It can be reached from Yogyakarta, about 43 km northward. Or alternatively from Semarang, about 75 km southward. FYI, the capital of Central Java is Semarang, not Magelang.

Buses are the most common transportation you can use to travel to Magelang, either from Yogyakarta or Semarang. From Yogyakarta, there are two departure terminals available for you. They are Giwangan Terminal for business class and Jombor Terminal for economy class. The bus fares from Giwangan Terminal are around Rp 15.000 – Rp 20.000 while from Jombor Terminal are around Rp 10.000. The trip will take about 2 hours.

From Semarang, you can depart from Terminal Terboyo. The buses vary from business to economy class. The fares for business class are around Rp 45.000. The trip will take about 2.5 hours.

Magelang has two regions, the City of Magelang and the Regency of Magelang. Both of them have many attractive places, from historical places to amazing scenery. A lot of things you can explore. Surely you won’t regret spending your time here. So, let’s find out what top things to do in Magelang are. 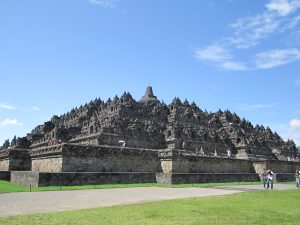 This is the number one must-do thing when you come to Magelang. Borobudur is the world’s largest Buddhist temple and listed as a World Heritage Site by UNESCO. Borobudur was built in the 9th century by Sailendra Dynasty. The temple has 504 Buddha statues and its central dome is surrounded by 72 perforated stupas. Inside every stupa, there is a Buddha statue performing sitting cross legged.

Visiting Borobudur temple is quite easy. You can get on the bus from Magelang Terminal. Many buses offer route from there to Borobudur. Or you can drive toward Yogyakarta and you will find street signs directing you to Borobudur. 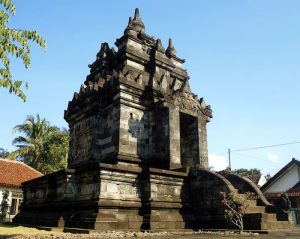 Pawon temple was built in the 9th century, at the same era with Borobudur temple. The builder was also Sailendra Dynasty. The temple was allegedly built for king’s tomb. This hypothesis came from the name of temple. Pawon is derived from Javanese word, Per-awu-an, means a place that contains dust. It could be the dust of cremated king. The temple is also known as Bajranalan. The aka came from the name of village where the temple is located.

Because its architecture, researchers claimed Pawon temple as a jewel of Javanese temple. Pawon temple is only 1.75 km east from Borobudur temple. So it’s not too far. Make sure it’s on your list. Visiting Pawon temple is definitely worth it. 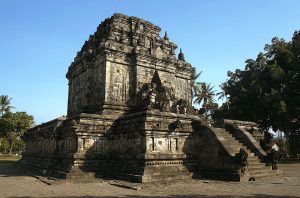 Mendut temple was built in the 9th century by the same Sailendra Dynasty. The temple is just 3 km east from Borobudur. The interesting part is you can draw an imaginary straight line from Borobudur to Mendut, with Pawon right in the middle of them. This thing suggests there must be religious connection between these temples even though the process is still mystery for researchers.

During Vesak annual ritual, Buddhists walk from Mendut, passing Pawon, and end up at Borobudur.  Javanese people who still follow Kejawen, a traditional Javanese mysticism, often pray here for their wishes such as prosperity, health or wealth. Visiting Mendut temple is a must for you as a closure of your journey to Borobudur.

Not far from Borobudur temple, located in Karangrejo Village, Borobudur Distric, Magelang Regency, there is a hill named Punthuk Setumbu where you can admire the view of sunrise. When the day is dawning, the mist is floating in the air with the background of Merapi and Merbabu mountain. Truly wonderful nature. 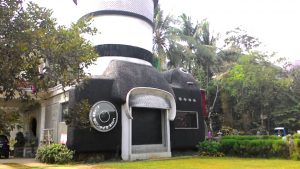 Obviously it’s an instagramable spot you must pay a visit. The house resembles a DLSR camera. The body part is where the owner lives and the lens part is functioned as an art gallery. Visitors get in to the house through the flash part while the display and mode serve as windows. Surprisingly, visitors will see more paintings in this house instead of photographs. The paintings are amazingly beautiful with lots of details. It turns out the owner is an experienced painter. Every Sunday, the owner dedicates his time to teach anyone who comes to his house to learn painting. A lot of kids around his house learn to him.

The camera house is located near Borobudur temple. It’s only 5 minutes away by foot. You need to walk through Bodrowati Street to avoid traffic jam. The price of entrance ticket is extremely cheap, just Rp 5.000. When you selfie at camera house, give the world your best pose ever. 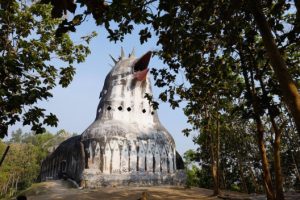 The Chicken Church, or Gereja Ayam, is a well known church in Magelang. Originally, the church was built in the shape of dove with crown on its head. But local people looked it as a hen. That’s how the name of Chicken Church came from.

Not just for worship purpose, the building is also used as a popular place to take wedding photograph or selfie. The building even appeared on the scene of Indonesia’s box office movie, Ada Apa Dengan Cinta 2 (AADC 2). The Chicken Church is located in Kembang Limus Village, Borobudur District, Magelang Regency. The price of entrance ticket is Rp 15.000. Just take your time here. Selfie at chicken church is not a sin. 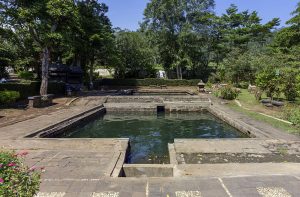 A long time ago, this hot water bath was only for princesses. The hot water comes directly from hot water spring. Soaking in hot water bath may relax your mind. The sulphur contained by the water can help curing your skin problems. Nevertheless, the water is still odorless. There is also a water bath with regular temperature. The location of it is lower than the hot water bath. The ruins of Umbul temple are surrounding this water bath site.

The hot water bath of Umbul temple can be found in Kartoharjo Village, Grabag District, Magelang Regency. The price of entrance ticket is Rp 3.000. 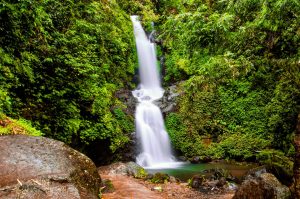 There is a legend about this Sekar Langit waterfall. The legend of Jaka Tarub. It was said when the angels were taking a bath at this waterfall, a man named Jaka Tarub stole the shawl belonged to one of the angels. It made the unlucky angel named Nawang Wulan couldn’t back to heaven. So the angel stayed on earth and married to Jaka Tarub.

The nature around the waterfall is well preserved. On the rainy day, there will be restriction for visitors to avoid the danger of flood. The height of waterfall is about 30 meters from surface. 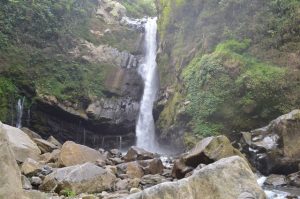 The waterfall is on the hillside of Mount Merapi, which erupted in 2010. The eruption made the view around the waterfall even more beautiful. Big stones are decorating the site of waterfall. The beauty of nature is also well preserved.

The Kedung Kayang waterfall is 950 meters above sea level with the height of around 40 meters. Monkeys are frequently seen flocking above the waterfall. The access to this waterfall is quite easy. It’s near Ketep Pass, about 3 km.. Just follow the street signs. The road is well maintained, fits for cars or bikes. Near the waterfall, there is camping ground for visitors. It’s a good idea to spend the night here. The Kedung Kayang waterfall is located in Wonolelo Village, Sawangan District, Magelang Regency. The price of entrance ticket is Rp 5.000. 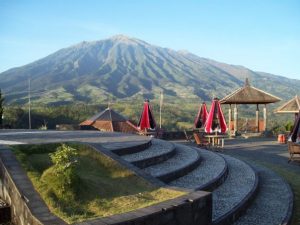 Ketep pass is situated between Mount Merapi and Mount Merbabu. It’s about 1,200 meters above sea level. From this site you can see the amazing view of both mountains. It has small cinema regularly playing documentary about Mount Merapi, binoculars, food stalls and Museum of Vulcanology. Panoramic view around Ketep pass is really breathtaking.

The ketep pass is located in Ketep Village, Sawangan District, Magelang Regency. The price of entrance ticket is Rp 7.500 for locals and Rp 39.000 for foreigners. It entitles visitor entry to cinema, museum, using binoculars and a non alcoholic drink. 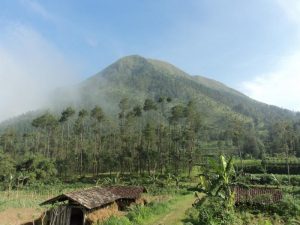 Mount Andong is a shield type mount. It’s suitable for beginners. With the height of 1,463 meters above sea level, the journey to the top takes only 2-4 hours. Once you are on top, you can see Mount Merapi, Mount Sindoro and Mount Sumbing.

Mount Andong has never erupted. It’s in the cross border of Salatiga, Semarang and Magelang. On the hillside, there is Mangli forest, a pine forest. Visitors can set their camp here.

Mount Andong is located in Sawit Village, Ngablak District, Magelang Regency. The price of entrance ticket is Rp 3.000. Indeed, mount Andong has a very beautiful view and it’s so natural. You can feel yourself like you are in a pure village and close to earth. 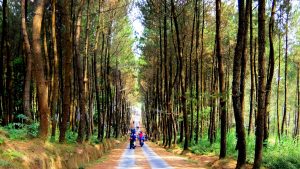 It’s another instagramable spot you must pay a visit. The Kragilan pine forest is on the hillside of Mount Merbabu, therefore you can’t see it from the road. Visitors need to follow the narrow path along the hill to find the pine forrest. The view at the pine forest is really beautiful. It’s shady in the noon. The wind blows slowly with cool temperature. It’s a perfect place to escape from daily routines. And to take selfie as well.

The Kragilan pine forest is located in Kaponan Village, Pakis District, Magelang Regency. There is no entrance ticket. Visitors will only pay for parking fee. Rp 5.000 for car and Rp 2.000 for bike. That’s the best things to do in Magelang, Central Java Indonesia. 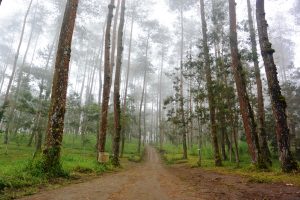 One more instagramable spot that is worth to visit. Just like Kragilan, the Grenden Pine Forest is also on the hillside of Mount Merbabu. Through this forest is the shortest way to the top of Mount Merbabu. Mist often covers this forest, adding exotic view for visitors. It’s a good place to selfie or spending time here for relaxing. To let the burden of your life lift away.

The Grenden pine forest is located in Grenden Vilaage, Pakis District, Magelang Regency. The price of entrance ticket is Rp 4.500.

You may also read: Places To Visit in Indonesia 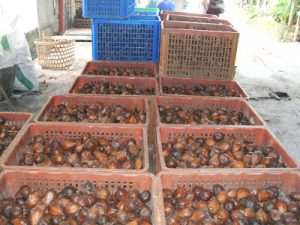 As part of agro tourism, Ngudi Luhur farmer group has opened its plantation for public. Visitors may eat on the spot as many snake fruits as they want for free. But if they want to take home the snake fruits, they must pay. Ngudi Luhur plantation is located in Kaliurang Village, Srumbung Distric, Magelang Regency. It’s free entry. 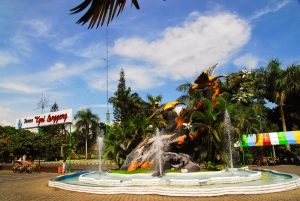 Kyai Langgeng park was opened in September 15th, 1987, by the governor of Central Java, H. Ismail. The area of the park is 27.5 hectare. The park has various attractions for visitors. Among of them are a collection of rare flowers, mini zoo, library, swimming pool, flying fox, jet coaster, and carousels. It combines fun and education. It’s fit for family.

Kyai Langgeng Park is located in the Cempaka Street, city of Magelang. The price of entrance ticket is Rp 20.000 for weekdays and Rp 25.000 for weekend.

Ok guys. Now you have guidelines for top things to do in Magelang Central Java Indonesia. Pack your bags. Don’t afraid to get lost. Have a nice holiday.

The Nightlife in Semarang Indonesia – Attractions –...

This is Why You Should Visit Semarang Once...

All Beautiful Things to Do in Pati, Central...

What to Do in Rembang, Central Java Indonesia...

5 Cultural Things to Do in Kartosuro, Central...

Increase Your Appetite in These Best Restaurants in...