14 Things to Do in Kediri Indonesia #Top Natural Spots 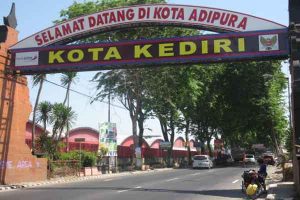 Kediri can be accessed by buses or trains. Visitors may embark on trains depart from Jakarta, Bandung, Yogyakarta, Surabaya or Malang. Economy or business class is available for passenger’s option.

Most people recognize Kediri as a home of Indonesia’s biggest cigarette factory. Besides, Kediri has amazing panoramic view, since its position is on the slope of Mount Kelud. Kediri also has wonderful amusement parks. So friends, let’s find out the best things to do in Kediri. 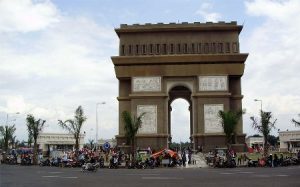 Monument of Simpang Lima Gumul definitely looks like France’s Arc de Triomphe. It’s still unknown why the ruling mayor at that time imitated the famous icon of Paris. Monument of Simpang Lima Gumul was built in 2003 and inaugurated in 2008. It’s 25 meters in height, covers 804 square meters and has three 3 meters-stairs. Those numbers represent the birth of Kediri Regency, which is March 25, 804. 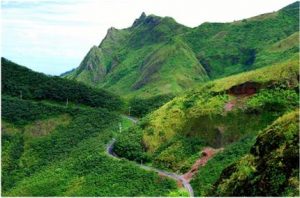 Mount Kelud is a popular tourist destination in Kediri. The road has been built to the top. From parking lot, visitors need to walk to get to the peak through tunnel. Out of the tunnel, the lately formed of Mount Kelud can be seen. Not just lava dome, visitors may enjoy hot springs on the hillside.

Recently, a new flower garden has been built in the rest area of Mount Kelud. The park has a large statue of a cow-headed man as a landmark. Besides flowers, there are also pineapple and sunflower gardens. Mount Kelud is located 30 km from east of Kediri City. The price of entrance ticket is Rp 5.000 on weekdays and Rp 10.000 on weekend. Opening hours are 8 am to 16.30 pm. 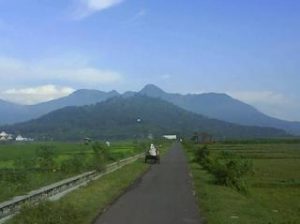 Mount Maskumambang is part of the hills of Mount Wilis. It’s 300 meters above sea level. If visitors climb the mount from the west side, the stairs has been built to the top. From the east side, the stairs are only half way. After that visitors still need to walk to arrive at the peak.

At the peak of Mount Maskumambang, there is tomb of Mbah Boncolono. He was a local hero during Dutch colonial. Cool air and green scenery also feast the eyes of visitors. If the weather is sunny, visitors may see the view of Kediri City. Mount Maskumambang is located at Sukorame Village, Mojoroto District, Kediri City.

You may also read: Mountains in Indonesia – Things to Do in Mount Rinjani Lombok 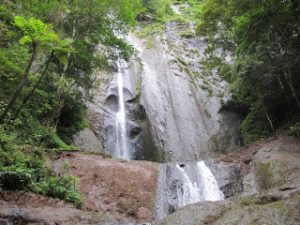 The journey to Dolo Waterfall is full of amazing scenery. On the right side, visitors will see green dense tropical forest. While on the left side, there is beautiful panorama of Mount Wilis. When visitors reach the waterfall area, they can see Kediri City far down there. Visitors have to walk down the stairs to see the waterfall.

Dolo Waterfall consists of three levels. The two lowest levels are four meters each, while the highest is about 30 meters high. The water debit is moderate so visitors may bathe under the waterfall. Better to visit the waterfall on weekdays because there will be less visitors. Dolo Waterfall is located at Jugo Village, Mojo District, Regency of Kediri. The price of entrance ticket is Rp 3.000. Opening hours are 8 am to 4 pm.

Read this article : Things to Do in Malang 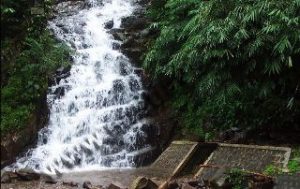 Irenggolo Waterfall is about an hour from Kediri City. But the journey will not be boring because visitors will be amazed by the scenery on the left and right of the road. The cold of the mountains begins to feel when visitors enter the waterfall area.

Irenggolo Waterfall is situated on the slopes of Mount Wilis with an altitude of about 1,200 meters above sea level. The waterfall looks unique because it looks like a ladder. It falls from a height of 80 meters. Irenggolo waterfall is located at Jugo Village, Mojo District, Regency of Kediri. The price of entrance ticket is Rp 3.000. Opening hours are 8 am to 4 pm. 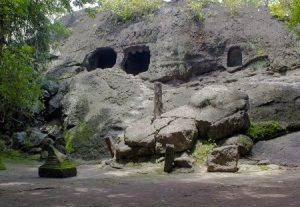 The name of the cave comes from its location that is on the hillside. Selomangleng literally means sloping stone. The cave is about 40 meters from the lowest land in the area. It’s made of black andesite stone that is large enough, so it looks conspicuous from a distance. Since andesitic rocks are waterproof, there are no stalagtites or stalagmites in the cave.

The walls of Selomangleng Cave are decorated with fine reliefs. But the meaning of these reliefs is still unknown. One of the most prominent reliefs is the appearance of a beautiful woman who is depicted cross-legged. This woman is allegedly the Goddess Kilisuci, princess of King Airlangga. Selomangleng Cave is located at Mastrip Street, Kediri City. The price of entrance ticket is Rp 4.000 for adults and Rp 2.500 for children. It opens 8 am to 9 pm. 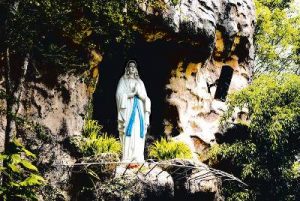 Maria Pohsarang Cave was built on October 11, 1998, which is an imitation of Maria Lourdes Cave in France. The height of Maria’s statue in the cave is over 3 meters tall, and the cliff itself is over 10 meters high. The statue is made larger than the original because it is adapted to the size of the cave that reaches almost 18 meters high.

The building and garden around the cave are arranged so neat and beautiful. The church is also unique, it has no closed wall. The church is only limited by natural stone fences. Please note,in the cave area, visitors are not allowed to eat because this place is devoted to pilgrims who pray. Maria Pohsarang Cave is located at Pohsarang Village, Semen District, Regency of Kediri. 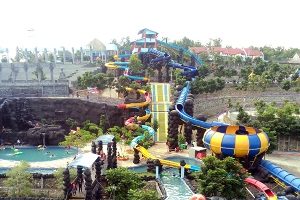 Gumul Paradise Island is a family resort that offers both water and non water games. It has a various types of pools, ranging from toddler pool, children pool and surely adult pool. In the adult pool there are many rides of agility such as Fun Boomerang, Body Slide, Speed Slide and Current Pool. For its own non-water rides there are several games such as Scary House, 3D Studio Art, Jungle Adventure, and Flying Fox.

Gumul Paradise Island also provides a complete range of facilities for its visitors. It has been equipped with clean bathroom, dressing room, gazebo and café. Gumul Paradise Island has the same location with Monument of Simpang Lima Gumul. It’s located at Sumberrejo Village, Ngasem District, Regency of Kediri. The price of entrance ticket is Rp 30.000 on weekdays and Rp 35.000 on weekend.Opening hours are 8 am to 5 pm. 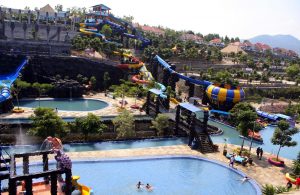 Sumber Ubalan Park has a tourist attraction in the form of protected forest and clear springs. The atmosphere around springs is really soothing. Local residents believe that the water from these springs can prolong their life and make them stay young.

Read this article : Things to Do in Makassar – Thins to Do in Gili Islands 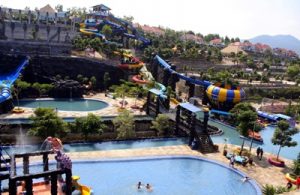 Kediri Water Park opens daily from Tuesday to Sunday and is closed on Monday. Kediri Water Park is located at Pagung Village, Semen District, Regency of Kediri. The price of entrance ticket is Rp 35.000 on weekdays and Rp 49.000 on weekend. Opening hours are 9 am to 18 pm. This is one of the best things to do in Kediri East Java, Indonesia. 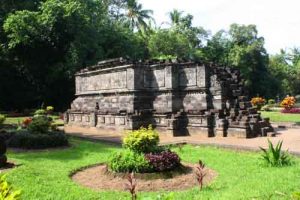 Surawana Temple is a Hindu temple that was built in 1390 as a place to glorify King Bhre Wengker, whose kingdom was still under the rule of Majapahit Kingdom. It was said in the Negarakertagama book that King Hayam Wuruk of Majapahit once visited this temple.

Surawana Temple’s size is not too big, only 8 X 8 m2, facing to the west. The whole body and the roof of the temple have been destroyed. It’s still unknown what causes it. Only the temple foot, as high as about 3 m, is upright in its place. Surawana Temple is located at Canggu Village, Pare District, Regency of Kediri. It’s free entry and opens 8 am to 5 pm.

Visit this place : Things to Do in Solo 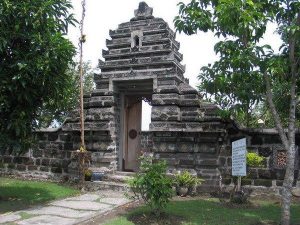 Every year at One Suro celebration, Petilasan Sri Aji Joyoboyo is always filled with people from all over the country, especially those who embrace Kejawen. They usually hold a certain ritual to commemorate Sri Aji Joyoboyo, king of Kediri, that they believe did not die but instantly moksa. Death by bringing the body, no trace at all !

Given that Joyoboyo is a powerful figure, many people come to this place to ask for blessing. Petilasan Sri Aji Joyoboyo was restored on February 22, 1975 and inaugurated on 17 April 1976. The restoration was initiated by the royal family of Hondodenta, Jogjakarta Palace, coordinated by Sri Sultan Hamengku Buwono VI. Petilasan Sri Aji Joyoboyo is located at Menang Village, Pagu Kediri, Regency of Kediri. It opens 8 am to 5 pm. 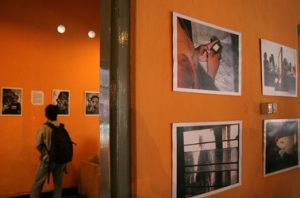 Museum of Photography has many collections of cameras, from antique camera, pocket camera, smartphone to DSLR camera. The museum also records the history of Kediri in the form of photos which have a high artwork. By visiting this museum visitors can learn the development of Kediri from time to time.

Museum of photography  is one of the best things to do in Kediri East Java, Indonesia, used to be a place of study tour. Besides as a historical tour, the museum can also be used as educational and family tourism. Visitors come in all ages. Museum photography is located at Kapten Pierre Tandean Street, Kediri City. It opens 8 am to 5 pm. 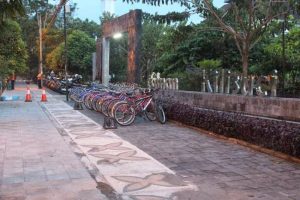 This is one of the best things to do in Kediri East Java, Indonesia. Kilisuci Park is quite spacious and has multipurpose. Walking around the park at medium speed is enough to make the body warm and sweat. Young couples may sit and chat on concrete benches. Young mothers may use child toys, such as swing seesaw boards and board slide, for their children. There is also foot reflection therapy for those who want to be healthier.

Kilisuci Park is very beautiful and can get rid of the saturation of daily activities. Therefore the park is always crowded on weekdays as well as on weekend. Kilisuci Park is located at Tulungrejo Village, Pare District, Regency of Kediri. It’s free and opens 24 hours.

27 Top Things to Do in Halmahera Island Indonesia

14 Top Things to Do in Ambon, Maluku Indonesia

7 Historical Places in Surabaya that Brought You...

The Ultimate Guide to Angkut Museum: the First...

7 Stupendous Beaches in Banyuwangi You Should Visit...