What to Eat in Semarang – 14 Top Traditional Food

Semarang City, have you been here? Most people unfamiliar with Semarang, the baddest and saddest they don’t even know if Semarang exist! This article will bring you closer to Semarang, especially the culinary.

There are many Things to Do in Semarang What to do in Semarang is try delicious culinary. Even though Semarang unknown as culinary city, but let’s take a look on the 15 lists Semarang culinary. 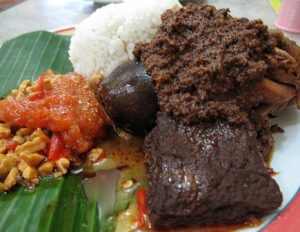 What to eat in Semarang? Gudeg well-known as a traditional food from Yogyakarta. However, you can also find it here on Semarang. Gudeg Abimanyu what I came up with. It looks like the common gudeg. Filled with nangka muda, kerupuk, chicken, various vegetables, and sweet sauce.

I’ve tasted gudeg many times, but I don’t really get into it. Perhaps cause the taste is too sweet for me, yet I’m spicy lovers. So sweet food just not my taste, chocolate and ice cream for exception. 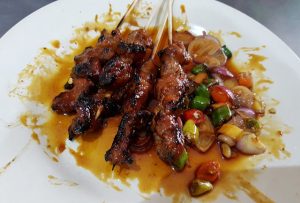 There are many Places To Visit in Indonesia and you can’t miss the food. This warung labeled as non HALAL restaurant since it served bacon. It means there is no Muslim over here. The bacon served with tusuk satay (if you seen this before). Satay in common just filled with chicken, beef, and lamb slices. But now you can taste it differences with bacon.

What about the taste? It is insanely yum yum and yu. To be honest, I no idea about the taste because I don’t taste it yet. But according to visitors, they said it’s bloody yum. 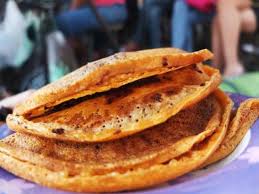 Kue lekker found easily in every state in Indonesia. In Semarang also the same, but the popular one is Kue Lekker Paimo. The difference comparing to another is what inside. Lekker in common served with cheese, chocolate, blueberry, or another jam. Lekker Paimo serves it with meat!

How is it taste? Well, if curiousity pop up, tryna be here very soon. Oh yeah, especially when you travel to Semarang. 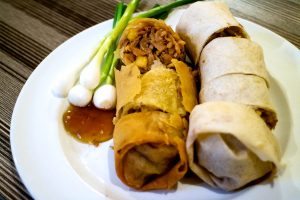 What to eat in Semarang? Lumpia has its famous in Yogyakarta. But hey, Lumpia also available in Semarang. The most popular one is Lumpia Gang Lombok. This snacks formed like a Chinese spring roll, then out it into local palate design.

As same as the other lumpia in common, Gang Lombok served almost the same taste. Yeah, it might a bit different a little bit. Try to come early because this place super crowd every single day! 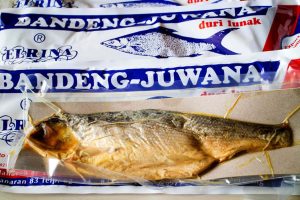 You may want to get Things to Do in Bangli Bali but don’t leave Semarang before you try this. Bandeng seems like milk fish, which notoriously hard to eat. However, it is much bonier comparing to seafoods. Along Pandanaran street, you can find Bandeng store wildly. Five till six stores lined adjuscent. If you a newbie buying Bandeng, you’ll confuse at that time because you no idea which store is better than others.

Well, Bandeng Presto in Juwana Elrina is what I recommend! This huge bandeng store been famous in the past couple years. The concept store also different, and known as the biggest Bandeng store. Beside selling Bandeng, you can also purchase Semarang snacks over here to take it to your colleagues when you back home. 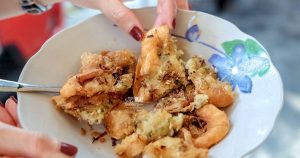 Life without snacks are devoid. Another snacks in Semarang is Tahu Pong. Tahu Pong itself made of fried tofu with bumbu kecap (sweet sauce in black color if you’ve ever seen this). It served in vary, such prawn, chicked, etc.

One of most ordered is Tahu Pong filled with prawn inside. This is totally delicious and will make you order over again. Literally it’s such a fried prawn in flout batter. 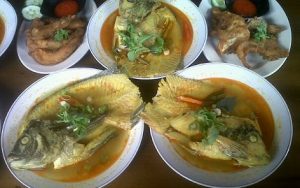 Gulai is Indonesian traditional food. How about the taste? No need asking. It is absolutely delicious. It’s served with fish flavoured with Gulai spices. It usually put on the wide plate, and look more watery. Gulai ikan isn’t a spicy food, but more like fish in common. However the taste totally different.

One more thing, Gulai ikan isn’t fried. It is braised on the pan or huge bowl. When it’s done, your appetite will increase in sudden because the smell effing good and yum. 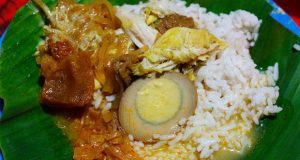 Yogyakarta became popular with their gudeg and Nasi Liwet. And Semarang came up with their Nasi Ayam. As you know “ayam” relate to “chicken”, so yup, it’s filled with slices of chicken. This food literally can found easily almost in every street food in Semarang.

Don’t ask the taste, it’s yum, I swear. Beside chicken, it also served with egg, rice, sweet satay flavour, and bound into a traditional palate which made of bamboo or rattan. After eating this, you may fly to Bali to do Things to Do Near Bali Airport

That’s all! Which one you’ve tried before? You can also check What to Eat in Jakarta Lumpia, tahu gimbal, or what? Thus, that’s all what to eat in Semarang for your best holiday ever in Indonesia! Happy holiday in Indonesia!

15 Fun Things to Do in Bandung with Family

15 Fascinating Things To Do in Lembang Bandung

The Nightlife in Semarang Indonesia – Attractions –...

This is Why You Should Visit Semarang Once...

All Beautiful Things to Do in Pati, Central...

What to Do in Rembang, Central Java Indonesia...

5 Cultural Things to Do in Kartosuro, Central...

Increase Your Appetite in These Best Restaurants in...