13 Beautiful Things to Do in Riau Indonesia 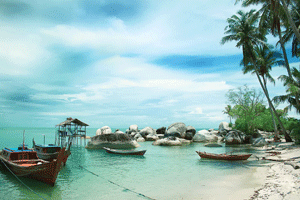 Until 2004, the province also includes the Riau Islands, a large island of small islands. Batam Island and Bintan Island located east of Sumatra and south of Singapore. The archipelago was expanded into a province in July 2004. The capital and largest city of Riau is Pekanbaru. Other major cities include Dumai, Selatpanjang, Bagansiapiapi, Bengkalis, Bangkinang, Tembilahan, and Rengat.

So, what else you can fin in this area? To find out, lets check on some of the best things to do in Riau Indonesia: 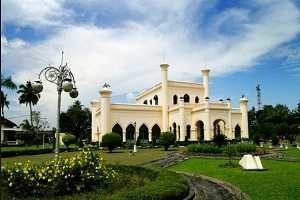 The siak sri indrapura palace was built in 1889 by Sultan Sharif Hasyim Abdul Jalil Syaifuddin. The main building adopted European, Arabic and Malay architectural styles. On the first floor, you can see royal collections such as the bronze statue of Queen Wilhelmina of the Netherlands and the statue of Sultan Syarif Hasyim I made of marble decorated with diamonds.

There is also a drum more than 200 years old. This drum last sounded in 1914 when the inauguration of Sultan Syarif Kasim II. Siak sri indrapura is still looks magnificent despite more than 100 years standing. On the second floor which used to be the sultan’s chamber and the royal guest room now contains a collection of sultan’s heritage weapons.

To be able to see the collection here, you are required to pay entrance fee of 3,000 Rupiah. Not only that, to get into the main building, you also have to remove the footwear because it is feared will damage the granite floor of the palace. Its an unique place.

You may also read: Things to Do in Balikpapan – Things to do in Bukittinggi 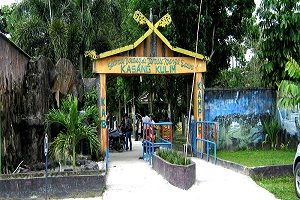 The kulim zoo which has an area of ​​ten hectares is a tourist attraction in Pekanbaru, this spot visited by many tourists at the weekend. Sang Kulim Zoo has many animals that can be introduced to children ranging from monkeys, birds, snakes, porcupines and many more.

If lucky, you can also ride elephants at a cost of 10,000 Rupiah per 10 minutes. Sang Kulim Zoo can be reached about 30 minutes from downtown Pekanbaru. So what are you waiting for. In addition to observing the collection of animals, there are children activities such as skateboarding, swings, fishing ponds and children’s pool. 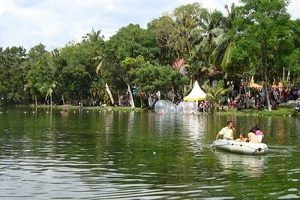 This place offers a very enjoyable outdoor family recreation. The air is fresh because the Mayang Nature Recreation Park is surrounded by hills, the surrounding air is cool so it is suitable for relaxing with family. Here, there are three fishing ponds that can be used to satisfy your fishing hobby. Also, this tourist attraction in Pekanbaru is used as a fishing game location held by the local government.

In addition to fishing, you can try flying fox and various other outbound activities. For more relaxed activities, there are water bikes and giant water balls that you can rent. If carrying children, there is a ball-up arena, a children’s playground and a 3D movie studio at this 24-hectare resort.

There are also monkey masks and clown magic shows that entertain you and your family. Its a good place and one of the top things to do in Riau Indonesia. 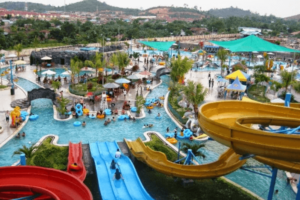 Riau Fantasi is the largest and most complete recreational park in Sumatra. This tourist attraction are also known as Labersa Water and Theme Park has an area of ​​about 6.5 hectares. As the name implies, this tourist attractions in Pekanbaru is divided into wet rides and dry rides.

In the water/wet rides, there are several types of ponds and water slides such as Adventure Pool. In this pond there are several towers that are connected with a rocking bridge. There is also a giant hanging bucket that can hold 3,000 liters of water and ready to flush you when it is fully charged. In addition, there is an adult pool with a depth of 1.5 meters and a child pool with a depth of 30 cm with a shower to play water.

For “dry rides”, there are various games that test the adrenaline like kora-kora, sky tower, wave blaster, speedy coaster and family swinger. If you want a more relaxed game, you can try the swivel comedy and tourist train. Supporting facilities at this resort besides mosque, toilet and cafeteria is gazebo and free WiFi. However, Riau Fantasi is located at Jalan Labersa or seitar 45 minutes from downtown Pekanbaru. What a good place. 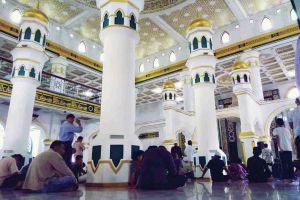 Another remains of Siak Sultanate in Pekanbaru. The mosque which is also known as the Grand Mosque of Pekanbaru was built in 1762 and is one of the oldest mosque in Riau. At the beginning of the building, this mosque is small and made of wood. Currently, you can see it as a magnificent mosque dominated by yellow Malay and large domed. After being renovated, the size of the mosque currently reaches 60 x 80 meters. In the past, in this mosque there is an old well that the water is believed to cure various diseases.

It is said that this well was heard to neighboring countries and made tourists from Singapore, Brunei Darussalam and Malaysia come to prove it. Now the well has been closed for several reasons.

This magnificent mosque combines Malay, Arabic, Turkish and Indian style architecture. Grand Mosque of An Nur is called as Taj Mahal of Pekanbaru. Its main building is symmetrical 50 x 50 meters with a large pond and fountain right in front of it makes this mosque similar to Taj Mahal in India. Very unique, isn’t it?

Check this too :  Things What to do in Uluwatu

6. Grand Mosque of An Nur 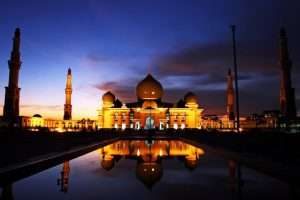 The mosque which consists of 3 floors with the dominance of green color is able to accommodate as many as 4,500 people worshipers. An Nur Grand Mosque has 5 domes and four towers. At night, the mosque looks very beautiful with the colorful lights that bounce off in the pond. What is interesting is the free WiFi facility here.

In addition to being a house of worship, this mosque has also become one of the many tourist attractions in Pekanbaru. In the month of Ramadan, the area of ​​the mosque will be used as a location to do “ngabuburit” and filled with food and clothing merchants. While waiting for time to break fasting, you can shop various culinary and accessories such as skullcap, tasbih, perfume and much more. What a great place. 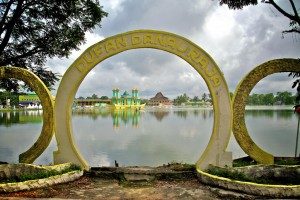 One of the tourist attractions in Rengat, is a lake where the Indragiri Palace family bathing are known by the name of King (Raja)  Lake. It is said that long ago not far from the lake bathing Indragiri royal family there is a royal palace building, which is currently in the middle of the river Indragiri and when the dry season at the time of river water drains we can see the former building of the back of the Palace of Indragiri.

In the era of 1980s, Indragiri Hulu local government intends to make this King Lake as a tourist area for the surrounding population by building a playground for children, and some other supporting facilities. So, don’t forget to visit some of the best things to do in Riau Indonesia.

Also visit: Lake Toba Sumatra – Things to Do in Sumatra 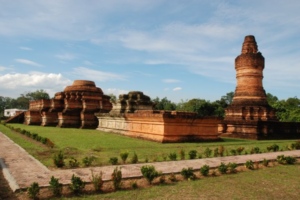 Muara Takus temple is one of the tourism objects located in Kampar regency, Riau Province, located in Muara Takus Village, Koto Kampar XIII Subdistrict. This temple is a Buddhist temple which is the only historical temple in Riau. Muara Takus Temple site is surrounded by a 74 x 74 meter wall, made of white stone with a wall height of ± 80 cm, outside the area there is also a wall of land measuring 1.5 x 1.5 kilometers, surround this complex to the edge of Kampar River Right.

Inside this complex there are several buildings of the temple called the Candi Tua, Candi Bungsu, Mahligai Stupa and Palangka. An unique place, isn’t it? 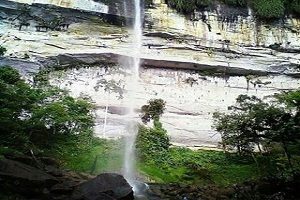 Waterfall Lubuk Bigau or so-called Waterfall Pangkalan Kapas, located in Lubuk Bigau Village, Kamparkiri Hulu District, Kampar District, Riau Province, arguably this waterfall is the highest in Riau because of the high reach 130 meters. This waterfall is really still natural and rarely touchable. There is no single building such as Gazebo or houses. You can see around the waterfall is filled with a dense tropical forest.

The breeze of the wind and the sound of water splashing and piles of brownish stones that lie along the sides of the stream of water forming  an exotic tributary. What a beautiful place!

You may also read: Things to Do in Banda Aceh 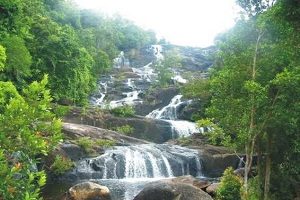 Waterfall of Seven Levels, as the name called, this waterfall has seven levels or seven waterfalls that can be reached by climbing the hillsides. This waterfall is located in Lubuk Ambacang Village, District Hulu Kanan, Kuantan Singingi Regency.

To get here, you must use the boat down the river for approximately 15 minutes. Waterfall itself is quite beautiful and charming. The first waterfall that has been seen and can be visited easily. The second, third, and fourth waterfalls can also be easily reached by walking the concrete ladder built between steep cliffs and the still-beautiful tree trunks.

At four waterfalls that “only” has a height of between 5 to 15 meters, visitors can enjoy the exotic landscape. 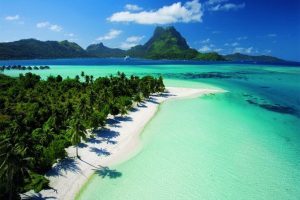 Jemur Island is a group of islands consisting several islands such as Tekong Gold Island, Tekong Simbang Island, Labuhan Bilik Island and other small islands, located about 72 km from the capital Rokan Hilir of Bagansiapiapi.

Jemur Island is uninhabited and only a stopover place for fishermen who are going to sea. A TNI-AL  (Marine) post was established on the island for the sake of observation and navigation. Jemur Island is one of tourism potential in Rokan Hilir Regency with coastal charm and turtle breeding. So, don’t forget to visit this place too. 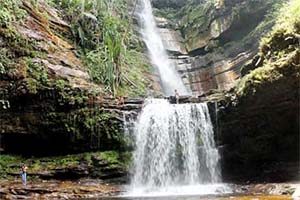 Aek Martua Waterfall or commonly abbreviated with AM located in the location of the mountains that have a very beautiful natural scenery, and located precisely in District Bangun Purba, Rokan Hulu, Riau Province.

This waterfall has several levels with varying heights ranging from 5 meters – 30 meters, because of it, the waterfall also has a nickname called the waterfall with a thousand steps. Perfect for you, natural attractions hunter. 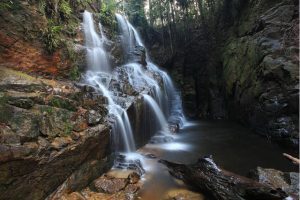 The height of this waterfall reaches 20 m. In there, you will listen to the amazing rhythm of water splashing from this waterfall attraction in Riau. Your eyes will be spoiled by the beautiful atmosphere that is hard to find in modern urban settlements in Sumatra. The area is still very natural and clear, making Guruh Gemurai more special and has popular visitors, especially on holidays or also weekends. In addition to looking at the beauty of this waterfall in Riau, you can also play the water in the area under the waterfall.

The location is in Kasang Village, Kuantan Mudik District. This waterfall has a height of about 20 meters. Compared to a waterfall of seven levels, this waterfall is certainly more accessible because it does not need to use a boat to go down the river. What a great place to relax.

23 Things to Do in Badung Bali Indonesia #Fascinated

20 Things to Do in Dumai Indonesia (#Beautiful...