Top 20 Things to Do in Malioboro Yogyakarta, Indonesia 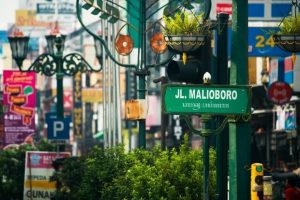 Hey there, if you traveling to central Java, its not so bad to try a visit to the famous Yogyakarta. A city filled with thousand of cultures and arts. Now, the famous site in this city is the Malioboro Yogyakarta. This street is already famous throughout the archipelago.

Then, after visiting it, you should go to the other places near it, all included in the list of top things to do in Malioboro Yogyakarta : 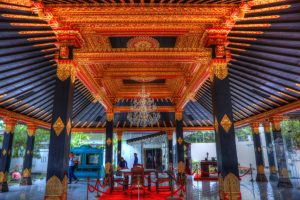 The grand building of Kraton Yogyakarta is standing graciously in the beautiful city of Yogyakarta. The building was founded by Prince Mangkubumi, who later held Sri Sultan Hamengku Buwono I, in 1775. He chose the area as a place to build the Kraton, right between the river of Winongo and Code river, a dried marshy area.

There are two squares in this Kraton. One in the front side, and the other is in the area of backyard. Actually there’s a sacred thing that many people talk about, which is the shape of the formation of the Monument of Yogyakarta, Mount Merapi, and Kraton itself. Its really nice to see. 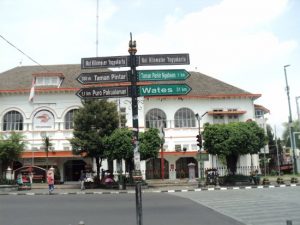 Scratches of light emanated from the grand old European-style building located at the junction of Jl. Ahmad Dahlan Yogyakarta at dusk. Once the building undergoing revitalization, but did not eliminate the historical value. Indeed, became the icon of Zero Kilometer of Yogyakarta. Don’t forget to look at other ancient buildings that make us like being in Europe a few years ago.

Zero Kilometer Point becomes a must for you who choose to spend holidays in Yogyakarta. Right in the heart of Jogja, this area is always crowded everyday. Starting from dawn, morning, noon, night, until early morning. This is the pulse of Yogyakarta that you really need to see.

3. The Museum of Vrederburg Fort 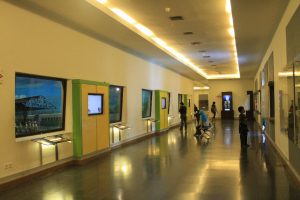 This fort was built in 1765 in Yogyakarta by the group called VOC. The VOC is the famous economic group that exist in the colonial era. The first establishment of this spot is actually to be the defence point of the Dutch minister, plus as the government center. This square-shaped fort has a monitored tower on all four corners. In the past, VOC and Dutch soldiers often patrolled the walls.

Overall, if not miscalculated, this museum has 4 (four) dioramas of historical events in Indonesia, especially in Yogyakarta Province. In addition to the dioramas containing historical images in Indonesia, inside the Vredeburg Fort Museum there is also a kind of touch screen technology featuring tour guides in Yogyakarta Special Province, complete with guided walks and information on culinary spots and accommodation in Yogyakarta. Really good to see. 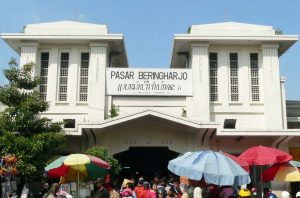 This market, located just at the southern end of the eastern side of Malioboro Street- A Yani Street. As you walk down Malioboro Street towards the south, the Beringharjo Market is on the left side. The sign is quite easy, when on the edge of the road began to see a crowd of fruit merchants, merchants accessories and snacks, then that’s where Beringharjo is located. Prepare your budget to buy some stuff! 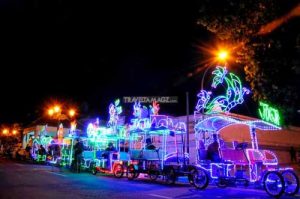 This square is behind the Kraton which has a function for the back side of the Kraton yogyakarta. Its also considered a sacred place, because the location of the palace itself is in an imaginary line that connects between Mount Merapi, Keraton, and Parangtritis Beach. While the South Coast is believed to be guarded by Queen Kidul who is said to have a magical relationship with the King of Mataram.

Activities in the South Square offers a lot of entertainment that can be enjoyed by local and foreign tourists. In the morning, the Square is functioned as a place of sports, here also provides sports equipment that has been installed on the edge of the road around the Square. Besides we can also do cyling, sports run, or just a leisurely stroll. At the time of Sunday morning, this square is sometimes also held a healthy gymnastics event. Pretty fun spot. 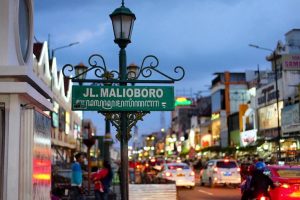 If you are looking for a tourist location not far from Malioboro, of course Malioboro street itself is the answer. There are many culinary tourism sites that can be explored. There are many angkringans that open at night, and often used by many young people to hang out. In addition there are many inns around Malioboro that makes Malioboro a solid location and has a characteristic.

In addition there are many souvenir centers in Malioboro that can be visited for shopping. Of course Malioboro Street has become increasingly crowded after revamping in recent months. 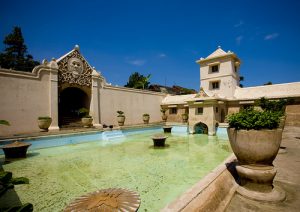 Meanwhile, in the back of Taman Sari, there are also many interesting old buildings to take pictures. One is the Underground Mosque in Taman Sari is so popular in social media. There is an old but very exotic liaison ladder to take pictures. Really worth to visit as the best things to do in Malioboro Yogyakarta, Indonesia. 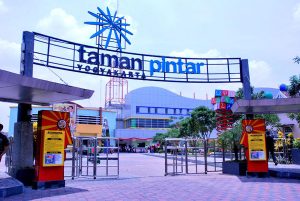 Near Malioboro there is also an interesting educational tour and quite visited by tourists. Its name is Taman Pintar Yogyakarta. If you come to Jogja, please stop by. The location of this tour is a good educational based tourist sites for children. Most people who come here are family and children.

This tourist spot is very popular. Some even say that tourists who have not been to Taman Pintar Yogyakarta means not complete their tourism activities in Jogja. This tourist attraction is also quite cheap to visit. So it must be good for your children and wallet. 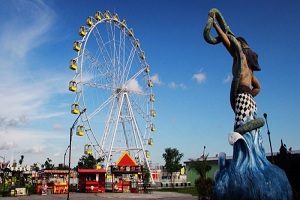 Not far from the Malioboro area, there is another urban tourist complex called Sindu Kusuma Edupark. SKE is a tourist location near Malioboro which was opened at the end of 2014 ago. Not many tourists know this SKE. However, at the time of opening, visitors reached more than 1500 per day. If curious, just come directly to it.

SKE tourist area is an urban tourist location with a great attraction of bianglala. The height of the bianglala even reaches 50 meters. In addition, the area is also open until the evening, so that tourists can freely enjoy various rides there. 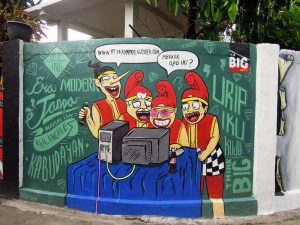 Next best things to do in Malioboro Yogyakarta, Cyber ​​Village of Yogyakarta is also often referred to as Cyber ​​Village RT 36. The location is near Malioboro and can be visited by tourists with ease. The specialty of this village is its unique concept from other tourist villages. This village is one of the internet access center that can be operated by tourists who come there.

This village is equipped with a computer device that is placed in a post or a security post. Everyone who comes free to operates it. There are also well-painted walls for photographs. Feel the technology!

You may also read:  Things to Do in Surakarta 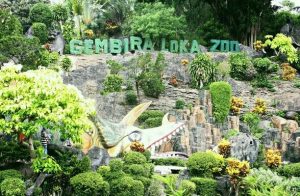 If you want a different atmosphere in Jogjakarta, but do not want to far away from the Malioboro area, just come to the Gembira Loka Zoo. The location is not far from Malioboro. The zoo covers an area of ​​20 hectares with more than 100 collections of animals. In addition there are also 61 species of flora that are fully maintained.

For tourists who bring children, there are also many games rides. Many tourists from outside the area come there to enjoy the atmosphere of rest. Reportedly, this zoo comes from the location of animal preservation from the Palace of Yogyakarta. So, the animals conditions ain’t arguable. 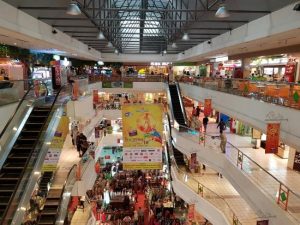 Malioboro Mall is a shopping place on malioboro street of Jogja or Yogyakarta city. The oldest Mall building in jogja which provides a variety of latest fashion products, culinary, household necessities such as groceries, as well as books and handmade products such as batik and accessories.

All the shopping in Malioboro Mall can be found in a six-story building like the Matahari Dept Store, McDonalds, Hero Supermarket, Gramedia, Periplus, Surf Planet, J-C0, Bucheri, and many others.

You may also read: Places To Visit in Indonesia

Around Malioboro there is also a souvenir attraction and art that has existed since ancient times. This is Kotagede Silver Handicraft Center. Tourists can come here easily. If the fear of getting lost, take a pedicab. The location is in District Umbulharjo which is directly adjacent to Bantul regency.

Since ancient times Kotagede is indeed famous for its silver craft. Tourists who are interested to shop souvenirs in the form of silverware can stop there to get the best work desired. Its really magnificent.

Other Attractions in Malioboro, Yogyakarta

Here are more things to do in Malioboro Yogyakarta, Indonesia. You should visit other places left, such as :

Finally that’s it, the list of top things to do in Malioboro Yogyakarta. So what do you think about it? You love it? If so, tell us in the comment to share your experiences. Have a good time!

Another places to visit:

40 Best Things to Do in Java Indonesia (Must Visit)

Top 20 Things to Do in Pasuruan, East Java, Indonesia

Is Borobudur The Largest Buddhist Temple in The...

Things to Do in Wates Yogyakarta – Must...

What to Do in Yogyakarta for 3 Days...

Why Everyone Should Visit Yogyakarta Indonesia? Find the...

All Things to Buy in Yogyakarta Night Market...