15 Wonderful Things to Do in Pacitan Indonesia

After talking the top attractions in Indonesia to do in the year of January, we want to tell you about another city in East Java called Pacitan. Just like the other city filled with natural attractions like things to do in Pasuruan, you can see so many polution-free attractions in here. Some of then even still undetected until now.

Not only that, the beaches in here are even in the same level with those beautiful beaches in Flores, in the way of beauty and cleanliness. They also very affordable of course, because located in a city with very easy access. So what are those things you can find in here?

Let’s figure it out all things to do in Pacitan Indonesia! 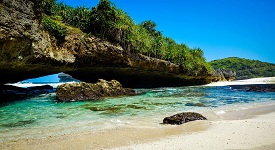 First thing first, we will go to our first beach located in Pacitan city called Srau Beach. For the exact location, it’s in the village of Candi, Pringkuku, Pacitan. Not like the beaches in Kuta, which has their own speciality for each of them, this Sraub Beach contains something unimaginable.

If you thingking that you’re gonna get one beach called Srau beach, you’re wtrong! In this Srau beach location you’ll e greeted with theree different beahes completed with their own characteristic. One beach has this very soft sand, the other beach has the save sea with the sea shells around, and the last beach is the beach that only filled sea shells. Want to check them all? 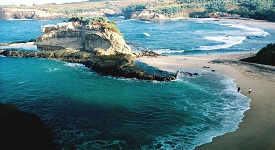 The second place is called Klayar Beach. For you who take the vacation with your whole family especially with kids or toddlers, this Klayar Beach is not well recommended because of its gigantic waves that can sweep them easily. It’s dangerous, but there’s something in there.

This beach has its own flute, the natural flute. Yes, you can her the tunes while haning out in this beach, especially when the water condition reaches the “beast” level, with the big waves around. The big waves will hit the big holey coral and creates the sounds of Klayar beach’s flute. 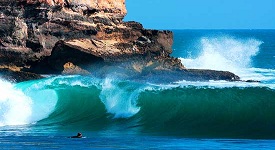 In the third place we have this Watu Karung Beach. For you who want to take the challenging waves, the perfect location to do that is not only in the Padang-padang beach in things to do in Ungasan Bali, but in the Watu Karung you can also do the same thing perfectly.

Don’t even question the waves here, they’re very ready to challenge any surfers who dare to come to them. If you’re an experienced surfer, this Watu Karung beach is very enjoyable, not only the waves are in pretty good size, but the condition of the water itself is already really satisfying. You can visit the area of Pringkungkung for real experience. 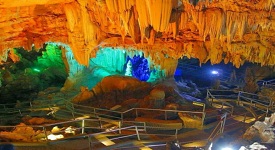 After going to the beautiful beaches Pacitan city has, let’s go to the caves. The first one to look at is the Gong Cave, located in Bomo village, Punung, Pacitan. The view of it from outside already spoils the eyes of the tourists. Even some of them start taking pitures even though only on the outside,

Stepping to the inner cave, there’s already a safety facility like the guardraills, so you can feel safe in here while enjoying the view of the Gong Cave. Beside the guardraills, the staff also placed some lights to illuminated the light of stalactites in there. Deeper, there’s a natural watery platform called Sendang Bidadari (lake of the angels) that has some interesting myth. 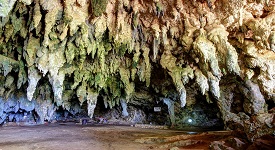 Not like the Japanese cave you can find in things to do in Klungkung Bali that has some interesting world war stories, this Tabunan Cave doesn’t have anything to do abut the world war things. Located still in the area of Punung, Pacitan, this cave also has the most interesting thingof all the caves in Pacitan City. This cve has itsown musical instrument, the Gong.

Not the human made Gong, but the natural one. The Gong is came from he giant stalagmite that can be hit with your own palm, or the wooden hammer in there. The sound of it really resembling the sounds of a Gong perfectly. Beside hearing some tunes from it, the “Gong” is also worth some selfies. How many pictures do you want to take then? 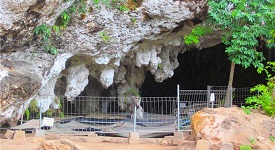 Finally in the sixth place in our list of things to do in Pacitan, there’s this Song Terus Cave. This one is considered as one of the amazing archaeological sites in the world because the thing that contained in there.

So what is the thing that making so many people curious about it? It’s the ancient human, 10.000 yars old called The Old Sayem. Of course it’s not a real name. But since the year of 1999 when it was found, many archaeologist from other countries start to came to this site. As a tourist, be sure to not breaking anything while you have your tour in there. Don’t destroy part of Indonesian history.

Other Attractions in Pacitan East Java

The top 10 list ain’t complete without the other four, and here the more things to do in Pacitan Indonesia:

So that is our list of things do in Pacitan, filled with 10 wonderful places that worth visiting. This city is one of the proofs that the province of East Java is still has some astonishing places to enjoy. So don’t you feel bad to take some vacations in here than in Bali, because its cities will satisfy you with their own unique way.

10 Marvelous Things to Do in Plaza Indonesia Jakarta

5 Wise Things to Do in Cathedral Jakarta