15 Cultural Things to Do in Demak Indonesia

Demak is a small city which located in north Semarang. Demak is also known as guardian saint of Islam saint city which has so many traveling objects from historical places until natural places and others. This article will mention few of traveling places in Demak and aroud it that you must to visit. 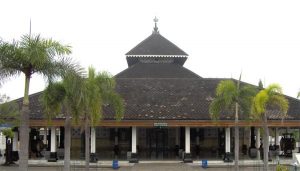 First tourism to must visit in Demak is Grand Mosque of Demak, which is inheritance of nine guardian saint of Islam and Sultan Fatah. The age of mosque architecture which is reach almost a half century give much inspirations for others religious places to all archipelago. The philosophy of this building is very main full. It has 3 trap roofs which symbol of Islam, faith and good action. In main room it has 4 pillars which guardian saint of Islams made. 8 pillars support the mosque which gave from king of Majapahit ( Father’s Sultan Fatah)

City of demak is identical with Islam, it cause this city is became one of city of spreading of Islam religion. The Islam evidence heritage at that time is this mosque. Mosque of Demak is the oldest mosque in Indonesia. Its located in Kauman village, house district Bintoro, district Demak. Formerly this mosque was believe as place where guardian saint of Islams of Allah come together to talked about Islam.

This mosque is very charismatic and has a view like a land tortoise. It means, where the head of land tortoise as a number 1, it has four legs means 4, the body of tortoise means number 1 and the tail means number 1. So if it bundle together will be 1401. Year 1401 Saka will be the year when the mosque build.

You may also visit: Things to Do in Pekalongan 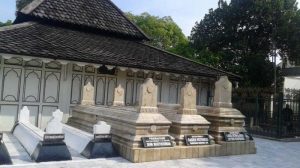 Sunan Kalijaga known as one of guardian saint of Islam who spread Islam in Java island which is located near of Grand Demak Mosque (Kalidangu region).

The way he spread Islam was very wise, one of the way was by Javanese song with puppet art. Sunan Kalijaga is one of sunan who liked by peoples at that time, and he passed away in Demak. This grave is very often visited from all around Indonesia especially Muslim visitors.

Unfortunately, all of visitors must obey all rules that occur there. The visitors can only visit the grave and they forbid to bring any things which has magic or supranatual power. And if they dare to bring it, the power of it will lose. So, that’s why if the visitor bring the magic things, its better to deposit in security post.

Power lose of magic things that visitor’s bring is Ki Empu Suro who is brother in law Sunan Kalijaga. In the past, Empu Suro had a job to made weapon with supernatural power which usually used by kings in Java. You may also visit: Things to Do in Cilacap 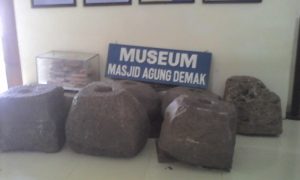 Its located in north of Demak Grand Mosque. In this museum, there a lot of inharitage things such as books which wrote by guardian saint of Islams saints of Islam, big drum, original door of mosque when its first time built., mug from Campa, mosque miniature, also mosque ilustration sin 500 years ago until changes that happend after renovation.

The museum to be seen from walk path outside of the mosque. In the south of museum, the visitor can see place where people doing ritual washing that circled by gate and chain. In the past, the place to do ritual washing was look like a pool that can be used together. The pool was given gate and chain to avoid touched by visitor because the pool’s water is still there.

This museum is not too large, in the middle of the museum there is original soko made inharitage from original mosque’s teacher. There are lot of collection that visitor can find such as old Al Quran complete 30juz, old book collection was kept in glasses cupboard and its still in good condition. Other collection is taal wood pole that made by Sunan Kalijaga, Lamp cap inheritage of Paku Buwono and many more. You may also visit: Things to Do in Magelang 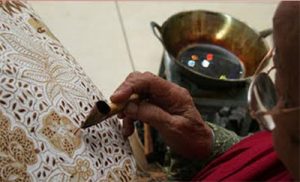 Demak has local treasure. Its has batik with variate motif which shows natural region source and also variate elements in Demak Grand Mosque. In this place you are not only shopping, also you can see how batik is made, from the beginning until it finish. Batik tiak only identic with Jogya, Solo and Pekalongan.

Demak also has Sentra Batik Demak personally. Every industry of batik ceterhas special characteristic in every city, such as batik in batik demak. Batik Demak  was developed since three years ago exactly in 2012.The motif of batik Demak is collaboration between classic motif and classic motif. 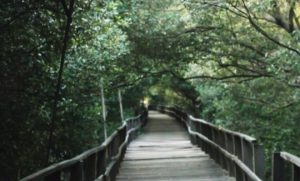 When you spend time in this place, you can see what a beautiful sunset and accompany by beautiful view and fresh beach air because there is a row of mangrove and lots of white stork come and go. We can use boats or motor cycle to reach here.

When we visit this place there is some rules that we must obey. First we must wear polite apparel  and second if you come as a couple you don’t have to hold your hand each other as long as you in mangrove forest. Its related with syekh abdullah muzakir’s grave which located near from this place. 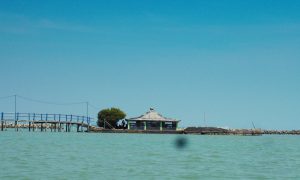 The place that visitor usually come is beach. Demak has beautiful beach which called Morosari beach. It’s located in Sayung. It has beautiful view with rows of mangrove near by. Such marina beach Semarang, but it still empty from visitor. This beach is usually full when a week after IED. Because syawalan tradition, it will held boat race and ocean.

This location is very strategic its approximately 3km from main street. Its exactly located in Semarang Street km 9. This route is starts from sayung bridge from Semarang to Demak turn left to trough the river to the north is about 4 km. This beach has beautiful view I the evening to the night. If you want to visit this place its better you come in the afternoon or in the morning. In the evening this place is really hot. But the air is turning cold in the afternoon and morning. You may also visit: Beaches in Semarang 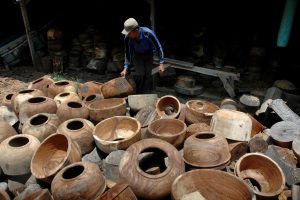 Next destination you can visit rebana craft center to fulfill your holiday. Its already to be come traditional art culture and proud manner of demak people y hand puppet, and traditional song is marawis and rebana  (function, name and phylosophy on it). In real rebana made from here was produced and sold to all over achipellago

Rebana and big drum have main material is skin of cow. Even its look so simple but the process to make it is not easy as we thought. Its caused by time to make rebana is so long and difficult process. In order to get good sound of rebana and big drum as we want. Good quality of rebana is shows when rebana is hit it has special sound and loud so the big  drum does. 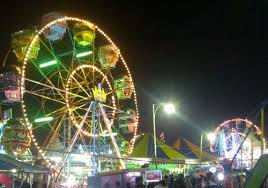 This is traditional occasion in demak which held in hajj month or dzulhijjah. Exactly 9 dzulhijjah it will held parade tumpeng songo from district core to grand mosque Demak. After all shows and reading holly Quran, visitor can eat tumpeng in balcony of mosque. 10 dzulhijjah in the morning is the top show of huge grebek, when all soldiers patang puluhan guidance bupati and all staffs from grand mosque demak to kadilangu to do ritual of jamasan (clean up the traditional weapons) inharitage of guardian state  of demak kingdom.

You also can find this grebek in yogyakkarta. All of abdi dalem will out parade from castle to alun alun. This grebek is usually seen by all people from any kind type.if you want to see huge grebek in demak its better if you ste up your time. It caused grebek will held in certain time. Grebek is not only parade, but it will held few process will through. This is step that will held when grebek:

You may also visit:  Things to Do in Semarang 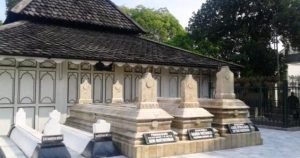 Demak is city full of history and religious things. Next deatinantion that can be a culture tourism journey is grave of kings demak. The grave yard it consist of prince trenggano grave, raden patah grave, syekh maulana magribi grave until arya panangsang.

When you come into the mosque you will find large space  with huge pool to ritual clean up (wudhu). The large space has a bridge as connector and it has two turn way. If turn right you will go to grand mosque demak. And if you turn left you will go to king’s demak graves. The graves is well taking care and there is key man who taking care of it. Inside of the graves there are some building such as pendopo and paseban that usually used to sit and face toward to the grave, kasepuhan grave, kanoman grave and many more.

There are Grave raden patah, raden patiunus and princess raden patah in kasepuhan grave. The unusual grave is grave of prince benawa because it looks longer than others. 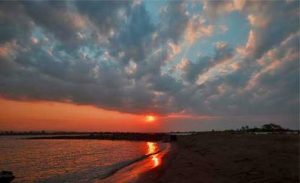 This beach has beautiful view and we can do any kind activities such as swimming, playing sands, and etc that makes visitors come to marina beach. To get in you must buy a ticket with affordable price Rp.3.000 each person. This beach is located near Semarang the city which near from Demak (approximately 1 hour). There are some  route that can you use to reach to marina beach.

This is first route that you can do. This route is to the east of  circle kali banteng and then go to the surabaya. When you arrive in SPBU, turn left to giant supermarket. The giant supermarket is already near from marina beach.

This route is the nearest route that you can do to arrive to marina beach. You can come in to semarang and it will take an hour to go there from demak. You can also go to arteri street. And after that you can go to giant supermarket which already near from marina beach.

This is demak’s culinary that you must try: 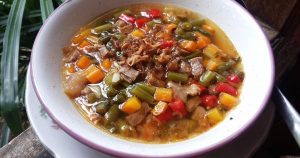 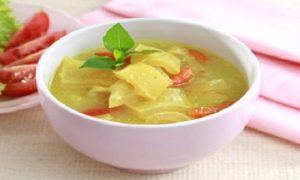 One of unique culinary in Demak is kikil soup. Which the base ingredients is kikil. With a good technic process, kikil mix into the soup and makes it easy to eat. If you to try the best taste in demak, the place that serve it is located in jalan lingkar demak, rumah makan ismun 3.

Most of soup is usually use chicken or beef, but the speciial thing of this soup is use kikil. Do you know kikil? Kikil is the part of foot and head cow. Even its come from foot and head part its delicious taste. For kikil lovers taste chewing and soft.

It’s a few place that you can visit in Demak. Don’t forget to try their culinary because it will feel uncomplete without try it.

15 Top Things to Do in Northern Sumatra Indonesia

20 Wonderful Things to Do in Klaten Indonesia