15 Things to Do in Rinca Island Indonesia (Most Beautiful)

So yeah, last time we did our travels to some areas in West Nusa Tenggara Indonesia. Because we already “spent” the attractions there, we’re gonna go a little bit to the east, in one island called Rinca Island. Well, this island has a Y shape, and located in the east lips of East Nusa Tenggara island. This is gotta be great. The location where the island located is actually just a kilometers away from Komodo island which is all of us know is the most unique habitat of the komodo dragon. But one thing we’ve wronged here.

All the people now that the Komodo island is the ONLY habitat of komodo dragon. It’s not true. Rinca island is also one of them. The different thing is, the komodos more dangerous in this island. So, many people won’t wonder alone in this very specific alone, because of those angry komodos. But beside that, it’s said that this island has more lively ecosystem of the komodos. You can see the komodo breeding, komodo hunting, and komodo doing other activities beside those. So, if you haven’t seen any komodo in your life, this is the perfect chance to see them for yourself. So, here are the challenging things to do in Rinca Island Indonesia:

Beside that there are some attractions to explore, maybe not much but sufficient. We can give you 15 of them like usual, so many more to go. Let the top 15 attractions in Rinca Island starts. Prepare your belt, make it very tight. And let’s roll!

The one thing you must see is the habitat of these dragons. Already mentioned above, this island is the most natural yet great because it looks more free and lively than Komodo island. No need to worry about anything though, just don’t wander to far away from the tour group. The guide will help you there, pointing and tell you some stuff about the life of komodo.

Yet, maybe this is a bit challenging for some people. But it’s very satisfying, because there’s no border about your curiosity anymore. You see what you always asked in your head. Live on acton! The Rinca Island is the best yet scariest place to come in East Nusa Tenggara.

There are several conservations in here, one of them is this Loh Buaya Rinca. Even though it has “buaya” in it or “crocodile”, no crocodiles can be found in here. All thing s are the komodos. Loh Buaya is like the welcome gate of the Rinca Island, where many boats and guides can be found.

So, you can pick a boat if you want to do a little tour, just going around the island, or you can ask some guide to take you and your group for the trekking. Just exploring the Rinca island with perfect safety ain’t so bad. So if you arrived in here, welcome to the Rinca Island.

This is the conservation center in Rinca island, which you can see the komodos almost everywhere. So you may be careful out there, and don’t try to disturb them with any funny activity. In this place there are some facilities like kitchen, a small restaurant, and guest houses.

So, if you decided to take some nights in the island, you may order one for your family. The scenery looks fantastic, the sea’s gorgeous, and the komodos well, magnificent. All of those combined into one exact spot called the Loh Komodo. The true komodo conservation in Rinca Island.

This one place is in the north side of the conservation. The location is pretty neat, near the sea with the little hills surround it. So this place is hilly, perfect for doing things like camping or some other group activities, like watching the sky for example.

You can try to swim there for a bit, and feel the cold water it has. Some people did camp in here, because the location’s very exotic and gladly no one’s around. So it’s a quiet hill, in the middle side of Y island. The place’s good, the view’s great, and the experience’s the best. 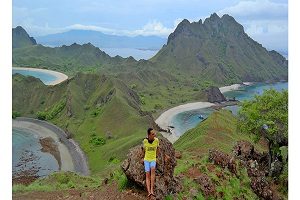 Another Toro in here. This one located precisely in the east side of the island. A little far away from Toro Baya. Well, as you can see in the picture this is also another hilly area, just like before. It’s look magical. The hills forming the natural spread of land across the sea. The view’s so fantastic in here.

So, you must at least bring a camera here, and start taking pictures because the panorama’s so beautiful. Especially the view of the sea, looked from the hill. The sea color changing from the light blue to darker blue. The degradation is indeed amazing to watch.

What’s more things to do in Rinca Island Indonesia? This jurassic park-like island is located in the southeast of Rinca Island. It’s way smaller than Rinca Island. But, the greatness of it is not less alike. In here you may found only on or two komodos, plus the others animals that will greet you upon your arrival. But the thing is, the spectacular thing is the mountain there.

You can start hiking there to its peak. Then make a camp there, with the purpose of looking at the sunrise and the sunset in one beautiful day. Sure it’ll be perfect for your holiday. Plus, the natural ecosystem is still intact, and can be enjoyed by you freely. Explore it with full spirit in heart!

Beside the Rohbong island that famous for its mountain, this Rinca Island surprisingly has something for you. The spot is called Toro Kima, another Toro in here with the from of the high mountain. Even though the mountain is not too big than the Rohbong’s, but hey it’s tall enough.

AS you can see, the mountain is a rocky one, a hill in the foot and completed with rocks on the middle and upper level. So, it might hard to achieve the peak. You need a little bit strength and better equipment to finally conquer its peak.

Now we’re gonna tell you about the “trident” of Rinca Island. There are another Toros in the island, but these three aligned with some unique from of three long and sharp-shape land. If you looking at it from Google Earth, you can see these three like resembling the three pointed fork. The big one. That three pointed thing is like the weapon of Sea God, Trident of Poseidon.

Now, the good thing to do here is kayaking. Like in the picture, with family. You can try to swim here too, but if you can swim. The area here’s not for those who can’t swim, the sea’s deep enough to kill you. So, best be careful at every time, while enjoying all the beauties.

Now the second one of the trident. Now, this place is a high area, so it must be best to do some camping here. You know, just one with nature. The place’s pretty good for taking video clips, or maybe for prewedding photo session, it’s not bad at all.

The thing that will hook you up in the spot is just the mountain. The mountain and the hilly areas around it. Like said above, you can either camping or doing another pollution-free activities like hiking maybe. It’s good.

The last one is the Toro Hepa, the full veggies area. The spot’s full of vegetation like some trees or vegetables. You can pick them if you want though, but it’ll count as stealing. You don’t want to break this holiday just for thieving, right?

But then, the area is pretty good. You can see the other two Toros in the distance. Also you can take a bit look at the sea. The horizon will tell you about how big the world is. We’re just a tiny utant ant, struggling to live another day. But anyway, the existence of Toro Hope completed it, The Trident’s completed.

And now the list is over. All the things to do in Rinca Island Indonesia already told. Now, it’s your decision to come here or not. Will you challenge to komodos? Are you brave enough? Then let’s prove it!

15 Favorite Things to Do in Moyo Island Indonesia

17 Things to Do in Praya Lombok Indonesia