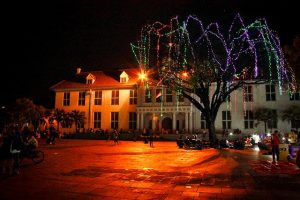 Back again to Jakarta. After visiting those beaches in Jakarta, now its time to visit another wonderful place in this cit, The Old Town. The Old Town Jakarta (Kota Tua Jakarta) has another name, The Old Batavia. It spans about 1.3 square kilometres within North Jakarta and West Jakarta.  The famous Chinese downtown area of Glodok is a part of Kota Tua.

The history of this place is in the 16th century, the Dutch established a base here that was the centre of commerce in the region. Because of its strategic position and access to natural resources, it quickly became an important hub across the Indonesian archipelago. Oddly, though, it always stayed relatively small. Just a century ago at the start of the 1900s, Jakarta only had a population of about 150,000 people. Since then, it has grown to a size of up to 28 million in the greater urban area.

However, the location of the Old Town is in the Fatahillah Street 1, Pinangsia Tamansari, West Jakarta. You can use any vehicle to get here though. Starting from your own vehicle, Bus, or via Commuter Line, its up to you. The very very good thing about this place is, its’s free ! (as long as you stay in the park, the park is free). No entry ticket needed, but some of the museums and spots require you to pay a little bit money though. But still, worth it. The Old Town itself opens everyday though, but not the attractions. Still, there are many things to do in Old Town Jakarta Indonesia. Okay then, after babbling about the general information, lets straight to the first location. 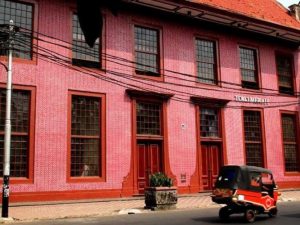 This is not an ordinary shop, the first things to do in Old Town Jakarta Indonesia. You can look at the walls cover in red color. The architecture here is also taking Chinese architecture that is identical with red. The location of the Red Store is in front of the river, witness a bloody massacre that sacrificed tens of thousands of lives of ethnic Chinese in the colonial era.

Red Shop was once used as a place to torture girls in the colonial era. Many believe that this place has many spirits from the old days, haunting it until this very day.  Because of that, unfortunately to go to the Red Shop, you need to go through strict licensing. However, other than that this one tourist spot is not open to the public so you can only see from outside how the shape and the building of this shop.

To get here, you must go to the West Kali Besar street, Pinang Siang, Tambora. Its also good to take pictures around this spot, maybe the spirits will join you. 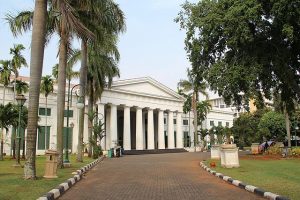 The location of this museum is inside the old Court of Justice built by the Dutch in 1870. The old court makes up one of the sides of the main square of Kota Tua and is one of the most impressive architectural buildings in the area.The museum houses traditional ceramics showcasing the range of designs across the archipelago. There are also artworks from the 19th and also 20th century and more modern ceramic works.

However this museum opens on Tuesday until Sunday, from 9 am to 3 pm. Also the entry ticket is very very cheap, only about 2.000 rupiahs. To get here you just need to take a walk to Post Kota street number 2. Its the first musem you need to check, absolutely stunning!. 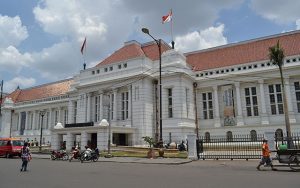 Banking, banking, banking. Sounds boring to you?. Well, actually the museum of it is the opposite of that. this is actually one of the most interesting museums in the area. The Bank Indonesia Museum takes a modern multimedia and interactive approach to telling the story of banks in Indonesia. It covers relevant history and has an emphasis on the production of bank notes.

The location of this museum is in the Pintu Besar Utara street number 3. The museum opens from Tuesday until Saturday, starting from 08.30 – 16.00. Except for Friday, it closes at 11.00, and the entry ticket is free!. However, this museum is not boring though,fun indeed. If you don’t believe it, just prove it yourself. 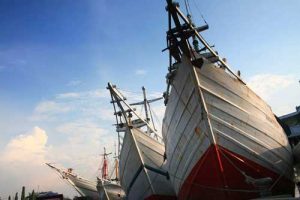 Want to take a look at the sea?, this is the perfect place for you then. Sunda Kelapa used to be an important harbor during Hindu-Buddhist and the Netherland Indies eras. Today, it is only a small fishing port. Sunda Kelapa or Kalapa was formerly the main harbor of Pajajaran and Tarumanagara Kingdom that occupy the area of West Java and Jakarta.

However, this port opens everyday, 24 hour non stop (its a port, it never closes). Also, the entry ticket is very very cheap, only about 2.500 rupiahs, you can enjoy that beautiful sight of this place. 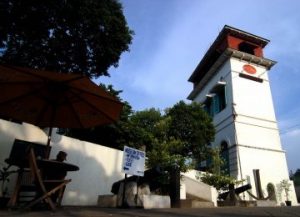 The location of this tower is inside the Sunda Kelapa Port. Built around 1839, the tower serves as a monitoring tower for ships coming in and out of the city of Batavia. In addition, this tower also serves as an office that collects taxes on goods at the port of Sunda Kelapa.

It is said that under the Syahbandar Tower there is an entrance into the underground passage to the Frederik Hendrik Fort which is now known as Istiqlal Mosque which has now been closed. Due to the increasing age of now entering approximately 168 years, the 12-meter-high building is slowly sloping so often called “Leaning Tower”. You can also climb to the top of the tower to see the ships coming and going to Sunda Kelapa Harbor. You can go here anytime you want though, suit yourself. 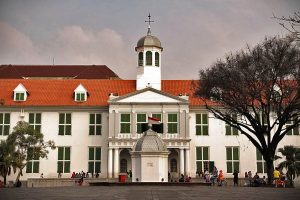 This main museum of the Old Town is the most famous museum in this area. Fatahillah or Jakarta Historical Museum is undoubtedly the main icon of Jakarta’s old city. The building was first constructed as city hall in 1626. This 1,300-square meter building used to be the administrative headquarters of the Dutch East India Company and later of the Dutch Colonial Government.

The collections displayed in the museum include replicas of Tarumanagara and Pajajaran artifacts in Jakarta, items found during archeological excavations in Jakarta, antique furnitures, ceramic, pottery, stone inscriptions, statues, and many more. The basement of the museum was once used as an underground prison to detain criminals as well as several Indonesian political figures such as Prince Diponegoro, Cut Nyak Dien, etc.

Also, this museum open from Tuesday – Saturday, starting from 9am – 3 pm. With only 2.000 rupiahs of entry ticket, you can greatly increase your knowledge in this museum. So, check it out!. 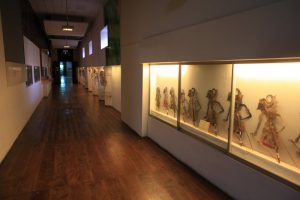 There’s also an another unique Museum, Museum of Puppets. The puppets are used in a traditional form of theatre common on the island of Java but also present in other islands across the country.The museum has a large range of exhibits from different times and gives a good showcase of the evolution of the local puppetry. The signs explaining the items are not of a high standard but a lot of the museum is self-explanatory. There are also occasional performances using traditional instruments like the gamelan.

Like the other museums, this place opens on Tuesday – Saturday, from 8 am – 5 pm. Also the location is in the Pintu Besar Utara street number 27. The entry ticket is only 5.000 rupiahs to visit this amazing place, so what are you waiting for? 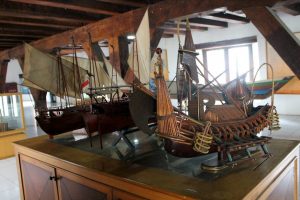 This unique museum sets inside former warehouses of the Dutch East India Company. The sea is extremely important to a country made up of thousands of islands – for civilian transport, military and commercial reasons. The museum showcases some examples of the history over the centuries. 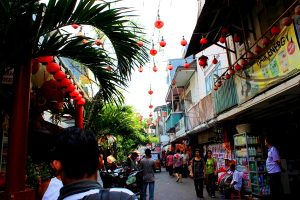 Petak Sembilan Pecinan is also known as Glodok. Glodok has been inhabited by the Chinese since the Dutch East India Company (VOC) era.Since the failure of uprising citizens of Tionghoa on in 1740 and the emergence of prohibition for them to stay in inside the city walls, Glodok be used as the township officially citizens of Tionghoa by VOC

The rebellion of uprising citizens of China was happened in 1740 and as a result, the Chinese people were prohibited to stay inside the city walls. Glodok has been changed into an official settlement area for the Chinese people by the Dutch East India Company (VOC). Since then, Glodok has developed into a Chinatown as well as a trade center. You can go here anytime you want. Its an interesting place to visit though, plus you can do shopping in here too. Nice isn’t it?. 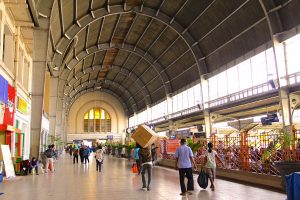 This is the iconic station of Jakarta. Of course, many people in Jakarta know this place. If you’ve not, well this palce is worth to check out. This is the largest railway station in Indonesia and was designed by a famous architect, Frans Johan Louwrens Ghijsels.

You can see the shape of the building and also take a picture for this place. Its very interesting to see.

Other Attractions near Old Town Jakarta

Meanwhile, there are many things to do in Old Town Jakarta Indonesia, here are: 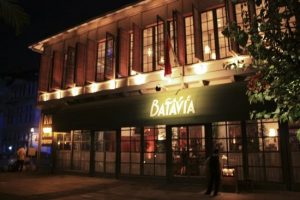 After visiting all the museums and walking around the Old Town, the most authentic place to have a rest is Batavia Café. It’s on the main square with a view across to the old City Hall. The building was constructed in 1850 in the colonial style and the interior has been designed with this history in mind.

The cafe opens everyday from 8am – 1 am. Don’t forget the location, in the Lada street, Pinangsia. With the variety of dish ranging from 29.000-190.000, you can choose anything you want. This cafe is worth a visit, and it will be a good time for you pleasure seekers. Indeed, this cafe is one of those best things to do in Old Town Jakarta Indonesia. 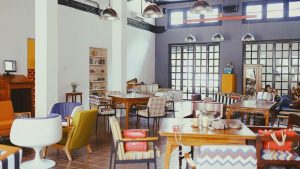 Another place to relax. But don’t be surprised, the interior in this cafe is rather more “Hipster” than the other. The design interior is very modern. Also the foods and the drinks are very good. This cafe is located at Pintu Besar Utara street 11.

That’s it, several things to do in Old Town Jakarta. Actually, there’s more thing you can explore, and i want you to find it yourself, and make a great experience of it, careful not to get lost though. Make a very nice memory of it, and please keep the environment clean, to make the beauty of those places still maintained. Enjoy your holiday, have a great day!

14 Top Things to Do in Tuban, East Java Indonesia

14 Top Things to Do in Ternate Indonesia #Beautiful

Things to Do in Bidadari Island – All...

All Beautiful Things to Do in Ayer Island...

The Rooftop Bars in Jakarta with Stunning View...

The Best Rooftop Bars and Sky Lounges in...

How to Get to Dunia Fantasi (Dufan) in...

How to Get to Museum Nasional Indonesia in...

How to Get to Monas in Jakarta Pusat...

Recommended Places for Breaking the Fast in Jakarta...