14 Top Things to Do in Tuban, East Java Indonesia 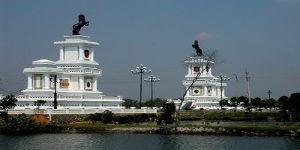 Tuban is a regency in East Java Province that is located about 101 km from northwest of Surabaya, the capital of East Java. Tuban Regency, whose capital is Tuban City, consists of 20 districts. The mainland Tuban region is dominated by lime rock, which is the raw material of cement. Therefore the government built a cement factory in this region, namely PT Semen Indonesia, Tbk. The famous Bengawan Solo river also flows through Tuban.

Currently Tuban can only be accessed by buses or cars. Since it’s located in the lane Pantura, Tuban is often bypassed by vehicles with the route of Surabaya – Jakarta or vice versa. Buses from major cities such as Bandung, Semarang, and Yogyakarta also serve the destination route of Tuban

Most people know Tuban because of its relation with Wali Songo. Besides, Tuban also has beautiful beaches and caves that are challenging to be explored. So friends, let’s find out the best things to do in Tuban East Java Indonesia. 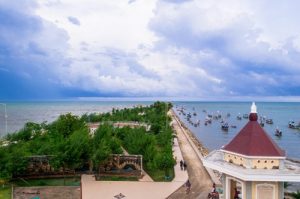 The first best things to do in Tuban East Java Indonesia is visiting Boom Beach. For the record, Boom Beach has an artificial peninsula that is about 1000 meters long. This artificial peninsula is used as a dock by traditional fishermen. There is also a road that juts into the sea that is usually used by visitors to enjoy the amazing sea view. Visitors can rest in the gazebos too that are around the beach, while enjoying beautiful sunrise or sunset.

Boom Beach is equipped with jogging track and a playground. There are swings, slides, seesaws, trains, etc. Visitors can also fish here. Boom Beach is located at north side of Tuban Square, Tuban City. Because of its strategic location, it can be reached by private or public transportation. The price of entrance ticket is Rp 2.500. It opens 6 am – 10 pm. 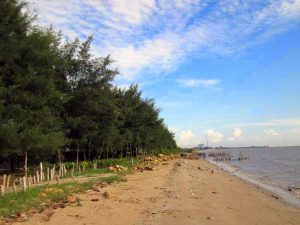 Next thing to do in Tuban East Java Indonesia is enjoying Pine Beach. Pine Beach offers the charm of shady pine trees that line the shore. Not only strolling around, visitors can also exercise like jogging, playing badminton, playing volleyball or playing futsal on the wide beach.

Pine Beach has many food stalls that line along the beach. There are also sellers of typical Tuban rujak. So visitors do not have to worry about starving when traveling on the beach. Pine Beach is located at Sugihwaras, Jenu, Regency of Tuban. It’s about 6.3 km from downtown Tuban or around 15 minutes by car. Visitors only need to pay parking fee Rp 5.000. It opens 24 hours. 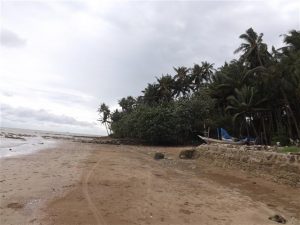 Coconut Beach or also known by the name of Panyuran Beach has a beautiful panoramic view with rows of coconut trees. Therefore it’s visited by many tourists on weekdays and holidays, some even camping on the beach.

Coconut Beach is decorated with medium rocks. Lots of shells hide on the rocks. The shells are sought by local residents for side dishes. If visitors come at the same time as the return of fishermen, visitors can buy fresh crabs and fish from them. Coconut Beach is located at Panyuran Village, Palang District, Regency of Tuban. It’s about 5 km from downtown Tuban or around 15 minutes by car. The price of entrance ticket is Rp 3.000 and opens 7 am – 5 pm.

You may also read: Beautiful Beaches in Indonesia 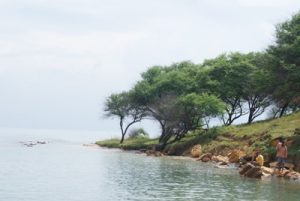 Sowan Beach has beautiful and exotic landscapes. The beach used to be a wood storage place. Therefore the beach area surrounded by shady trees. Rows of kelampis trees on the beach make the atmosphere cooler. The stretch of rocks on the beach gives a typical view that is wonderful. In addition admiring panoramic scenery, visitors can also see the activities of fishermen in the sea while enjoying grilled fish.

Sowan Beach has been equipped with appropriate facilities such as parking lot, rest room, restaurant and room for prayer. The beach is located at Bogorejo Village, Bancar District, Regency of Tuban. It’s about 40 km from downtown Tuban. The price of entrance ticket is Rp 5.000 and opens 7 am – 5 pm.

Read this article : Things to Do in Mount Rinjani Lombok 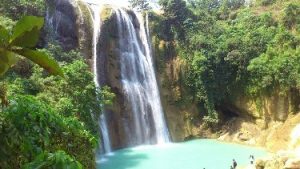 Nglirip Waterfall is actually an irrigation dam whose water flows to a lower area. This waterfall has a height of 35 meters and 28 meters wide. There is a small bridge made of iron at the top of the waterfall. By standing on the bridge, visitors can see the flowing of waterfalls and the stunning scenery of the surrounding nature. Nglirip Waterfall is located at Mulyo Agung Village, Singgahan District, Regency of Tuban. It’s about 37 km from southwest of Tuban. The price of entrance ticket is Rp 2.000 and opens 8 am to 5 pm.

You may also read: Waterfalls in Indonesia 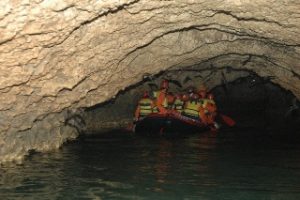 Ngerong Cave is a water cave that can only be explored using rubber boat. The cave has many fishes such as tawes, bader and nila. But visitors are forbidden to catch these fishes. If the ban is violated, it’s believed that the visitors will get bad luck. There are also bats that live at a depth of 700 meters. When they come out in the afternoon, it becomes a spectacular view.

Ngerong Cave has clean and clear water that is used by locals for bathing, washing and irrigation. The cave is located at Rengel Village, Regency of Tuban. It’s about 30 minutes from downtown Tuban by car. The price of entrance ticket is Rp 3.000 and opens 8 am – 5 pm. 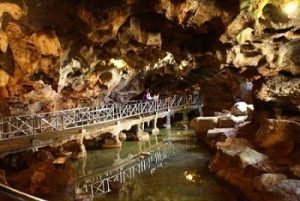 Akbar Cave is right below the traditional market. The cave is full of religious stories. It’s believed that Sunan Kalijogo and Sunan Bonang once meditated here. The cave has a natural water source named Kedung Tirta Agung. The water is believed to be efficacious for health and strength.

The path inside the cave has been fitted with paving block and equipped with iron fence barrier so that visitors will not get lost in the cave. Colored lights also have been installed inside the cave to show the texture of the cave. Akbar Cave is located at Gajah Mada Street, Tuban City It’s about 1.4 km from Tuban square or 5 minutes by car. The price of entrance ticket is Rp 5.000 and opens 8 am – 5 pm. 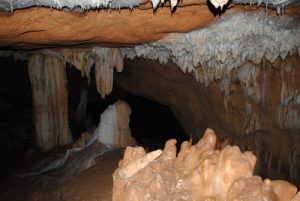 Putri Asih Cave is rich in stone ornaments such as stalactite, stalagmites, pillars, and gordyns. The cave has 9 rooms, but only room 1 to room 3 that are open to public. Room 1 is a meeting room. The beauty of stalactite and stalagmite can be seen here. Room 2 is a hermitage room. Room 3 is believed to be a kitchen and bathroom.

Putih Asih Cave used to be a meeting place of Wali Songo for discussing the spread and development of Islam. The cave is located at Nguluhan Village, Montong District, Regency of Tuban. It’s about 30 km south of downtown Tuban. The price of entrance ticket is Rp 10.000 for adults and Rp 5.000 for children. It opens 8 am – 5pm. 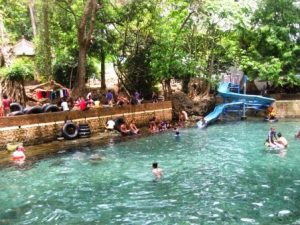 Bektiharjo Baths have natural springs that come out of the ground cavities, rocks and tree roots. The water is so clear so that visitors can look the bottom of the baths. Besides for tourist spot, Bektiharjo springs are also utilized by Tuban Water Company as one of the water sources for the consumption of the people of Tuban.

Bektiharjo baths have unique residents. They are monkeys that live around the baths. Visitors no need to worry about these monkeys because they are tame and friendly. Facilities also have been built in this place such as parking lot, stalls, playground, restaurants, and children’s pool. Bektiharjo Baths are located at Bektiharjo Village, Semanding District, Regency of Tuban. It’s about 5 km from downtown Tuban or around 15 minutes by car. The price of entrance ticket is Rp 4.500 and opens 9 am – 5 pm. 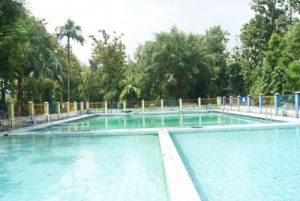 Hot Spring Prataan has been equipped with rest room and room for prayer. Besides soaking, visitors can also enjoy playing activities suh as flying fox and war game. Hot Spring Prataan is located at Wukiharjo Village, Parengan District, Regency of Tuban. It’s about 45 km southwest of downtown Tuban. The price of entrance ticket is Rp 10.000 on weekdays and Rp 12.500 on weekend. It opens 9 am – 5 pm.

11. Visiting the Tomb of Sunan Bonang 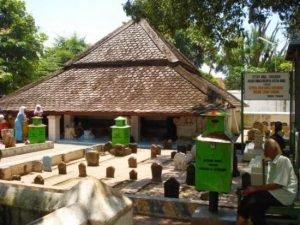 Sunan Bonang was one of the Wali Songo figures who used art for the spread of Islam. Sunan Bonang passed away in 1525. His tomb is located behind the Grand Mosque of Tuban City. Mystical things often occur in the Tomb of Sunan Bonang, so many visitors consider the tomb as a place for praying.

Since the renovation in 2012, the compound of the tomb looks neat and can accommodate many pilgrims without fear of heat and rain. The tomb of Sunan Bonang is located at Gajah Mada Street, downtown Tuban. It’s free entry and opens 24 hours for pilgrims.

Visit this place : Things to Do in Bangka Island 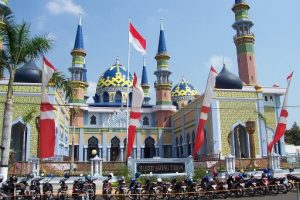 Grand Mosque of Tuban has a magnificent shape with the beauty of a fairy tale building in 1001 nights. The architecture of the mosque combines cultural diversity from various countries such as Arabic, Turkish and Indian. The use of bright colors greatly accentuates the building in the middle of Tuban City.

Grand Mosque of Tuban was built in the 15th century by the first Tuban Regent who embraced Islam, the Duke of Raden Ario Tedjo. The mosque has undergone several restorations, namely in 1894, 1985 and last in 2005. Grand Mosque of Tuban is located at Bonang Street, downtown Tuban. It’s free entry and opens according to schedule of worship. 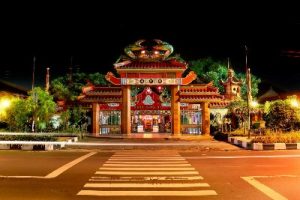 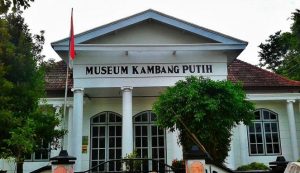 Kambang Putih Museum is the only museum in Tuban Regency. The museum has an interesting collection of historic objects. One of them is Koes Plus Bersaudara which is a legendary Indonesian band originating from Tuban. A collection of tapes and photos of Koes Plus is presented here.

15 Top Things to Do in Ubud Monkey Forest, Bali Indonesia

How Long Does It Take to Hike Mount...

Where to Go to Surabaya During Summer Vacation:...

What to Do in Balekambang Beach : Amazing...

All You Need to Know Before You Hike...

The Remarkable Things to Do Near Gunung Kawi

The Reasons Why Should Visit Surabaya Before You...

Searching for The Best Chinese Restaurants in Surabaya...