20 Things to Do in Mataram Lombok Indonesia 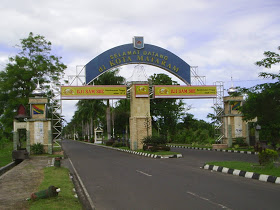 Mataram is the capital of West Nusa Tenggara province and is located in the western part of Lombok Island. The city is divided into 6 areas namely Ampenan, Cakranegara, Mataram, Pejanggik, Selaparang, and Sekarbela. The population of Mataram is dominated by the Sasak tribe, but there are also Balinese, Malay, Chinese and Arab.

You can come to Mataram via Lombok International Airport. Or if you want to depart from Bali, you can leave through Padang Bai Port to Lembar Port in West Lombok. The most efficient way to go around in Mataram is by renting a motorcycle. Usually hotels or inns also rent out motorcycles for their guests.

There is a saying that people often say. What’s in Bali can be found in Lombok. But what’s in Lombok can not be found in Bali. That’s why people who travel to Bali often continue their journey to Lombok. Certainly Mataram has interesting attractions to visit by tourists. Let’s find out the top things to do in Mataram Lombok Indonesia. 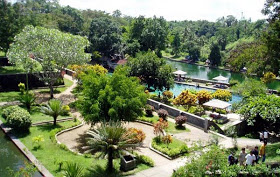 In the beautiful Narmada Park you can see the wide green lawn terraced, the king’s retreat palace, Narmada Temple, the public swimming pool, several large ponds and the Petirtaan Hall. In the Petirtaan Hall there is a spring that is believed to come from Mount Rinjani and has the efficacy to make ageless. You are allowed to get the efficacy of this spring by drinking it or washing your face.

Narmada Park is located in Lembuak Village, Narmada, West Lombok Regency, about 11 km from downtown Mataram. The admission is Rp 6,000 for domestic tourists and Rp 10,000 for foreign tourists. Opening hours is 8 am – 5 pm.

Read this : Things to Do in Mount Rinjani 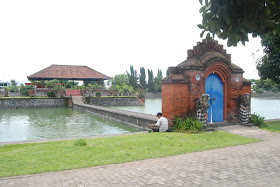 The Mayura Park was built by the King of Karangasem Bali in 1744. It is said that once the park was filled with snakes. To expel the snake the king brought in peacocks. That is the origin of the name of the park, Mayura means peacock.

Mayura Park is divided into the park and temple area. In the beautiful park you can see there is a large pond. In the middle of it there is a building which was used as a court in the Dutch era. There are also rows of mangosteen and mango trees that provide a calm atmosphere. If the trees are fruiting, you may pick it. Take time also to see the temple area whose architecture looks similar to those in Bali.

Mayura Park is located in Purbasari Street, Cakranegara, Mataram. The admission is Rp 5,000 for domestic tourists and Rp 10,000 for foreign tourists. Opening hours is 6 am – 6 pm.

Visit this : Things to Do in Karangasem Bali 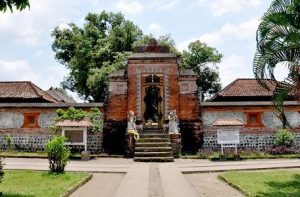 Lingsar Temple, which was built in 1741, is a symbol of tolerance between Hindus and Muslims in Lombok. For example, there are no pigs in Hindu offerings to their gods at Lingsar Temple because pigs are forbidden to Muslims. On the other hand, Muslims around Lingsar Temple do not slaughter cows during Eid al-Adha because cows are sacred animals for Hindus.

In the beautiful Lingsar temple there is a sacred pond whose water comes from Mount Rinjani. The pond is never dry even during the dry season. Because it is believed to bring blessings, many visitors are praying and throwing coins into the pond. If you are lucky, you can see the fishes of the pond that are also salvaged by local residents.

Lingsar Temple is located in Lingsar Village, Narmada, West Lombok Regency, about 12 km from downtown Mataram. There is no admission, only donations. Opening hours is 8 am – 5 pm 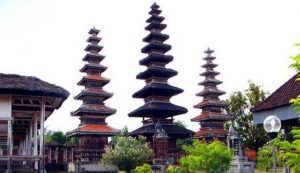 Meru Temple is located at Selaparang Street, Cakranegara, Mataram.It’s adjacent to Mayura Park. There is no admission. In exchange, to enter the temple you are required to rent a cloth and scarf, give tips to the guide and donate. Opening hours is 8 am – 5 pm.

Also read : Things to Do in Mount Batur Bali 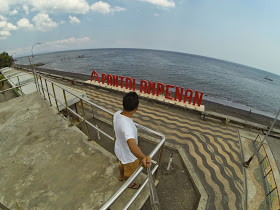 Ampenan Beach is a favorite place of Mataram people to spend time in the afternoon. Ampenan Beach is one of the best spots in Lombok to enjoy the sunset. With so many food vendors around the beach, you can hang out to wait for the sunset while enjoying various meals.

Ampenan Beach, which is a black sandy beach, is located in the Old Town of Ampenan. Therefore along the way to Ampenan Beach you can see the old buildings with European-style architecture. In the era of Dutch colonialism, Ampenan Beach had become the busiest port in Lombok.

Ampenan Beach is located at Pabean Street, Ampenan, Mataram. There is no admission, you only need to pay parking fee. It opens 24 hours. 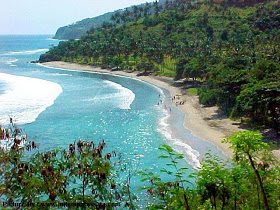 Senggigi Beach is the main tourist attraction in Lombok. The beach has beautiful white sand, clear blue sea, medium wave and not-too-crowded atmosphere. Senggigi Beach also has a long coastline, about 10 km. Walking along the beach accompanied with the sea breeze will make you relax and out of the hustle and bustle of the city.

When the full moon some people come to Senggigi Beach to do sand therapy. They bury themselves with sand to the extent of the neck. This method is believed to eliminate stiff. Not far from Senggigi Beach you can also see Batu Bolong Temple which stands on the reef jutting into the sea. It is said that the temple is often used as a place of plunge into the sea of broken women.

Senggigi Beach is located in Batu Layar, West Lombok Regency, about 12 km from downtown Mataram. The admission is Rp 15,000. 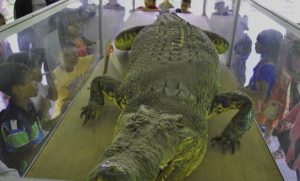 The Museum of West Nusa Tenggara, which was inaugurated in 1982, preserves the historic relics of tribes that inhabit Lombok and Sumbawa islands including the Chinese who came to trade. Among them are Sasak and Sumbawa wedding dresses; a horse toy for a circumcised child; traditional looms; traditional music instruments; swords, daggers, keris; goods from the Ching dynasty of the 10th – 14th century; and ancient manuscripts of palm leaves written in ancient Javanese, Balinese, and Arabic.

You can also see a miniature of Lombok and Sumbawa islands made in detail with mountains, lakes and rivers; a miniature of fishing village; a 4-meter alligator that has been preserved; and mystical objects such as a stone to cast out evil spirits.

The Museum of West Nusa Tenggara is located at Panji Tilar Negara Street, Mataram. The admission is Rp 1,000. Opening hours 8 am – 2 pm. It’s closed every Monday and national holiday. 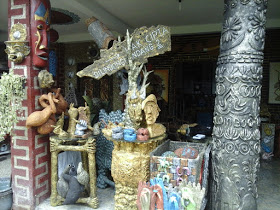 The Griya Lombok, which is located in H.M. Roeslan Street, South Ampenan, Mataram, is a workshop center as well as artshop for artwork made from waste paper. The Griya Lombok is owned by Mr. Theo Setiadi Sutedja, a local artist who has a vision of community empowerment, environmental management and the creation of high value local artwork. His work has been recognized worldwide and highly appreciated by art enthusiasts.

At The Griya Lombok you can learn to make artwork made from waste paper such as plaque, table, chair, jar, statue, jug, lantern, chess table, mask, etc. You will gain knowledge starting from the process of making the pulp, the formation of artwork, to finishing. Since the place also serves as an art gallery, you can also buy Mr. Theo’s artwork that is unique and artful.

Visit this : Things to Do in Flores

Udayana Park, which was inaugurated in 1988, is a favorite park for the people of Mataram. The park is adorned with beautiful flowers and its lush trees provide a calm atmosphere. Every morning people come to exercise, take a leisurely stroll or run down their 3 km jogging track. The city government has also equipped Udayana Park with fitness equipment, basketball court and skate board training ground.

Udayana Park is also a family vacation spot. Children can play in the playground or rent toys from the merchants. The stalls around the park sell a variety of foods such as meatballs, satay, fried rice, fried noodles, and fried duck. 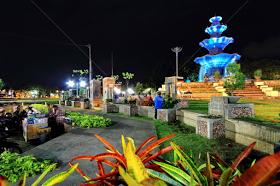 Sangkareang Park is a place for young people hanging out. Its location is in the middle of town, make the park easy to visit. Various events are often held in Sangkareang Park such as music performances, exhibitions and fun bikes.

Besides used for exercise in the morning, Sangkareang Park is also a place for children to play in the afternoon. The playground here is equipped with swings, seesaws and slides. Around the park there are also street vendors who sell a wide range of food at cheap prices.

Also read : Things to Do in Rinca Island

11. Visiting the Old Town of Ampenan 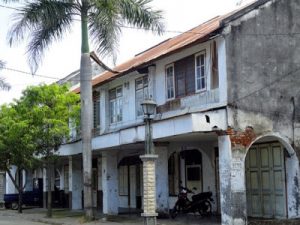 The Old Town of Ampenan used to be the economic center of Lombok. The Dutch made Ampenan a port city to compete with the coastal towns of Bali, which at that time was controlled by the Kingdom of Bali. In 1924 the Dutch built the Ampenan Port to support its trade activities.

But Ampenan is now only a remnant of the past glory. Since loading activities were moved to Lembar Port in the 1970s, Ampenan slowly lost its glamour. Only old European-style buildings that are still standing strong. Therefore the city government set the Old Town of Ampenan as a cultural heritage area and historical attractions.

Also visit : Things to Do in Moyo Island

Indeed, here are more things to do in Mataram Lombok : 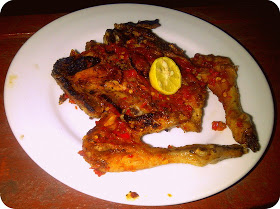 Culinary tour is definitely one of the top things to do in Mataram Lombok Indonesia. Taliwang Chicken is a culinary icon of Lombok. It is incomplete to visit Mataram if you have not tasted Taliwang Chicken. This Lombok’s typical cuisine is made from young local chicken, aged 3 – 5 months.

No wonder the appearance of Taliwang Chicken looks small. Because the chicken used is still young, the meat is more tender so that secret spices can be easily absorbed. There are two types of Taliwang Chicken, namely original and spicy. Nevertheless both are most delicious eaten with sambal.

There are many restaurants in Mataram that offer Taliwang Chicken menu. But the most famous is Taliwang Kania Restaurant at Panca Usaha Street, Cakranegara, Mataram. The price of Taliwang Chicken starts from Rp 50,000. The restaurant is open from 9 am to 9 pm. 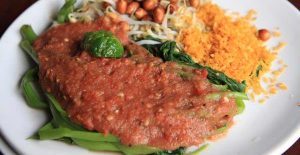 Plecing Kangkung (kale) is a typical vegetable dish from Lombok. Kale used is different from kale in Java. Javanese kale grows on the ground while Lombok kale grows in water such as lotus or water hyacinth. Therefore Lombok kale is more fresh, greener and larger.

Read this : Things to Do in Java

Bulayak Satay is a typical satay from Lombok. Satay is made from beef, chicken or innards. Its peanut seasoning has its own unique taste. Bulayak Satay is eaten with bulayak, a kind of lontong made of sticky rice and wrapped in palm leaves. Unlike lontong, bulayak is wrapped in spirals making it easy to open.

15 Lovely Things to Do in Gili Meno, Indonesia

30 Magical Things to Do in Nias Indonesia

The Things to Do in Sumbawa Besar Indonesia...

16 Amazing Things to Do in Tangsi Beach...

16 Wonderful Things to Do in Baturiti Lombok

16 Romantic Things to Do in Gili Trawangan

16 Picturesque Things to Do in Tanjung Lombok

16 Amazing Things to Do in Lembar Lombok

16 Unexpected Things to Do in Lombok in...