15 Things To Do in West Bali Indonesia (Magical Island)

Have you been in Bali before? How you feel staying and living for a moment in Bali? Is it amazing, comfy, or combo. We all know, Bali is the top destination for both local people and tourism. No lie, Bali became so popular recently because lot of tourist go there. Staying and living in Bali for a while feels awesome. The people is friendly, the culture is unique, the attraction places, the beaches, and night life. There are so many things to do in West Bali Indonesia will make you wanna stay forever.

When visiting Bali, most people prefer to go to Southern and Central area of this island. They almost forget, Bali still got one fascinate area. Yup, the area is Western. People said, this place is emptiness because there’s not ton of people go around and visit. But, West Bali also the same with the other areas. Further, Western area is the best place you won’t missing while visiting Bali.

“Western Bali is a magical island” If you plan to visit West Bali but still no idea where to go and what to do, here are the things to do in West Bali. 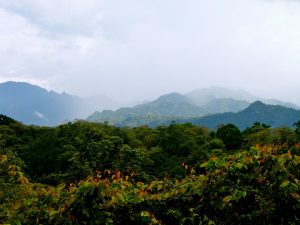 The park founded in 1941, certainly in 76 years ago. Bali Barat National Park originally built by Dutch yo protect endangered Bali Starling bird. Also to protect the remaining wild banteng, which known as a cattle for Balinese. Bali Barat National Park surrounded by six villages. The villages are contained with vary ethnicity, such Balinese, Madurese, Bugis, and Javanese. They are the pristine villages around.

The park built in 19,000 ha in Western Bali. But these days, the park extended more to the Eastern area, then the area became 77,000 ha in total. The park area is so beautiful, also cool. Afternoon to evening is the right time to visit the park when the sun not brighten to much.

The Bali Barat National park contains of primary mansoon forest, mangrove forest, savanna, sea grass vegetation types, coral reefs, sandy beaches, shallow, and deep sea waters. Each forest or tree have their own area to flourish. Then, one to another forest won’t taking other areas.

Bali Barat National Park is super protected area. When people crave to explore the entire park, they need to hire an official Park guide to accompany and guide ‘em exploring the park. Inside the park, people cannot do all things like they want. Because some activity allowed, and the rest is unallowed.

To catch the park, is enough to go by ferry from Gilimanuk. Arrived at Gilimanuk, go with a minibus or ojek to Cekik. The distance from Gilimanuk to Cekik is about three kilometers. 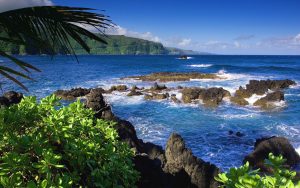 Beside coral reef, there’s also another plantation that will make both snorkelers and divers dumfound. Menjangan Island is a special spot for tourist and local people who wants to dive and see diverse of fish and corals.

Menjangan Island isn’t a danger and dreadful areas. There’s no spot to be worry for. Because the whole spot is safe and will not hurting anybody. A part seeing a beautiful and diversity of corals and fish, visitor also allowed to see shore birds and sea birds along the island. 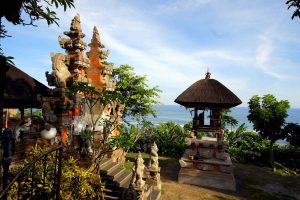 Rambut Siwi Temple well-known as one of the biggest Hinduism temple in Bali. The temple located in Negara Regency was renovated to make it looks better. The temple specially built for Hinduism to worship their God. Local people  believed there is a super natura power inside the temple. That’s why the temple became very sacred and can’t be passed in by stranger.

Rambut Siwi Temple offers breathtaking view since its being renovated. Moved to the top of hill to catch the idyllac and insanely views. Both dawn and dusk, the temple looks fascinating. Beside Rambut Siwi Temple, there are Goa Lawah and Pulaki Temple also. You can see all of ‘em by moving feet into the top of the cliff.

Rambut Siwi Temple located in Yeh Embang Kangin countryside. If you wanna come to the temple, feel free because it opens for both local and tourist. From Denpasar, it takes 2.5 hours by driving a car or 45 minutes from negara town to catch Rambut Siwi Temple. 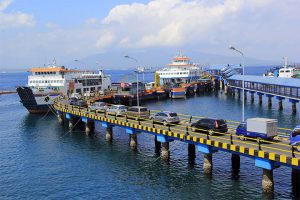 Gilimanuk is the most accessible place in Western Bali. To catch one to another places would be easy from Gilimanuk by ferries. Gilimanuk such a connected bridge from Java to Bali and the opposite. There are lot of ferries connect both places into another. Every 10 minutes, ferry will come and go, drive passenger into places they want.

Not only such a connected bridge, Gilimanuk also offers a beautiful coral reef. As same as Menjangan Island, there are variety of corals. The beaches also beautiful will absolutely make visitors astonish. Further, the sand not only came up in white, but also in black sand. How it looks like? Simply come to Gilimanuk and see it. 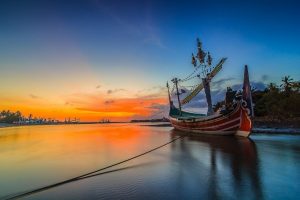 The beach isn’t crowd at all, unlike Kuta beach or maybe Sanur. Perancak beach is quiet, and suitable for whom looking for a nice place for photography. Every single year, Perancak beach celebrated kind of traditional exhibition, called rowing boat race. 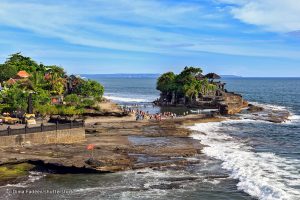 Your destination to Western Bali will uncomplete before going to Tanah Lot Temple. This fame temple has lot of stories, and the meaning of “tanah lot” is a small island floating on the sea. Its built naturally and irregularly by reef plain. The temple also look different with the common temple because it hasn’t few pages.

Tanah Lot Temple have a uniqueness, walk through across the stress, you’ll find caves. Inside the caves, lived snakes in colors blake and white or combo. Literally, the snakes are endanger, but get attacked by snakes rarely happened. Moreover, the snakes are passive and moves slowly.

Tanah Lot Temple also known as a place for worshipping. Hinduism would love to go to the temple everytime they wanna pray to the God. Some exhibition also held at the temple, depends on the date and day. 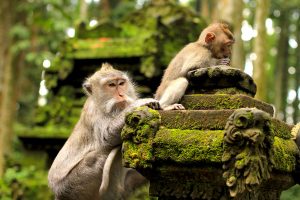 Nearby Sangeh village, there is Sangeh Monkey Forest, located also in Western Bali. The forest filled with enormous trees, able to growing up until 40 metres. The trees planted in the forest taking 6 hectares area, which is spacious for monkey to do attraction. Beside the forest, the monkey also found easily in Bukit Sari Temple.

All monkey, whether in Sangeh Forest and Bukit Sari Temple are believed very sacred. For whom pay more attention or respect the temple, the monkey will approach ‘em one by one. But remember, please dress casually and don’t wear jewel. Sometimes the monkeys are cunning and tryna snatch the jewel or sumptuous stuffs you’ve wear.

Things to do in West Bali? Well, we mentioned the best and favourite places above. Make sure you’ll visit one by one area, especially if you have much time for holiday.

20 Heavenly Things to Do in Umalas Bali Indonesia

15 Things To Do in West Lombok (Insanely Captivating)

What Should Be My Itinerary for 10 Days...

Points Why Bali Is The Best Destination for...

Things to Do Near Bingin Beach Bali –...

What to Do in Dreamland Beach Bali –...