14 Top Things to Do in Pontianak Indonesia #Beautiful Spots 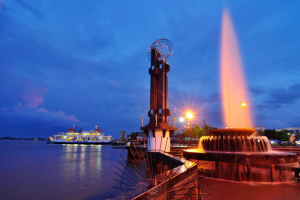 Pontianak is the capital of West Kalimantan Province, which is situated on the island of Borneo. It was founded in October, 23, 1771 by Sultan Syarif Abdurrahman Alkadrie. The city has an area of 107.82 square kilometers. In addition, the city is passed over by the Kapuas River and Landak River. The people of Pontianak are predominantly Dayak, Malay and Chinese as well as significant number of minorities such as Bugis and Javanese.

Pontianak can be accessed from major cities in Indonesia by plane through Supadio Airport. The airport also has direct international flights to Kuching, and Kuala Lumpur. While the Seaport of Pontianak serves the ships with the route Pontianak-Jakarta, Pontianak-Surabaya and Pontianak-Semarang. There are also inter-state bus services, namely to Kuching and to Brunei. Land transportation to Malaysia is possible through cross-Kalimantan route.

Most people know Pontianak lies on the equator, hence it’s widely known as Equatorial City. Besides, Pontianak also has beautiful landscape that is challenging to be explored. Not to mention the amazing cultural diversity in Pontianak that presents various events throughout the year. So friends, let’s find out the top things to do in Pontianak West Kalimantan Indonesia. 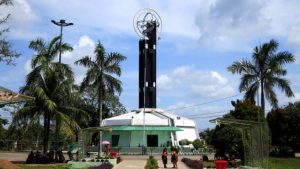 Of course the number one of top things to do in Pontianak West Kalimantan Indonesia is visiting Equator Monument. There are 12 countries in the world crossed by the equator. But there is only one city that exactly separates the northern and southern hemispheres, namely Pontianak. Equator Monument was first built in 1928, but then underwent several renovations. The last renovation was in 1990 and finally the monument was inaugurated on 21 September 1991.

The most awaited event by the visitors is the culmination of the sun, i.e. when the sun is right on the equator. At that moment, the position of the sun will be right above the head so that the shadow of the Equator Monument will “disappear” a few seconds. The culmination occurs twice a year, between March 21-23 and September 21-23. Equator Monument is located at Khatulistiwa Street, North Pontianak. It’s about 3 km from downtown Pontianak. Opening hour is 8 am – 5 pm and it’s also free entry.

2. Visiting the Palace of Kadriyah Sultanate 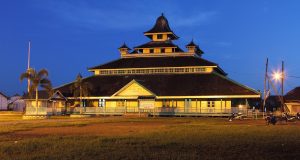 The next destination is the Palace of Kadriyah Sultanate. The palace was built from 1771 until 1778 by Syarif Abdurrahman Alkadri, who was the first sultan and founder of the city of Pontianak. The palace was made from selected woods. In front of the palace, visitors can see 13 ancient Portuguese-made and French-made cannons.

The interior color of the palace of Kadriyah Sultanate is dominated by yellow. The palace has a collection of historic objects such as thrones, a variety of jewelry used for generations, ancient artifacts, glassware, photos of the Sultan and his family and also the royal family tree. Several private rooms belonging to the sultanate’s family are also opened to the public. The palace of Kadriyah Sultanate is located at Tanjung Raya Street, East Pontianak. It’s about 4 km from downtown Pontianak. Opening hour is 10 am – 6 pm and it’s free entry.

Visit this place : Things to Do in Bintan Island 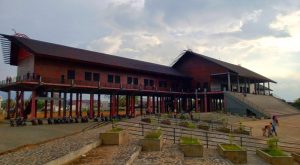 Betang House, or also called Long House, is a traditional house of indigenous Dayak tribe. Even though it’s only replica, the shape and contents resemble the original. The house is made from iron wood that is resistant to termites and can stand up to hundreds of years. Several families live together in Betang House, so there are many rooms under the roof.

Betang House is built high from the ground to avoid sudden enemies, wild animals, and occasional floods. The house is elongated and equipped with ladder and entrance. Visitors can see the painting of Dayak in almost every part of the wall depicting Dayak culture. Betang House is located at Let. Jend. Sutoyo Street, downtown Pontianak. Opening hour is 9 am – 5 pm and it’s free entry. 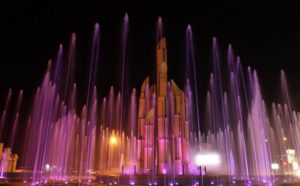 Pontianak attractions, The Pointed Bamboo Monument was established as a memorial to the struggle of eleven West Kalimantan heroes who were exiled to West Papua by the Dutch colonial, fearing their movement would trigger a revolt in Borneo. The monument consists of 11 bamboos with different sizes, characterizing 11 hero figures from different regions. The pointed bamboo was taken as a symbolic form of the struggle of the Indonesian nation.

The Pointed Bamboo Monument was inaugurated by the Governor of West Kalimantan, H. Soedjiman, on November 10, 1987. The monument underwent two renovations, namely in 1995 and 2006. In 2013, Pontianak City Municipality beautified the monument area by building a fountain that could display various forms of dance. In addition, the garden of roses was built around the area. The Pointed Bamboo Monument is located at Jend. Achmad Yani Street, Southeast Pontianak. It’s open 24 hours and is free. 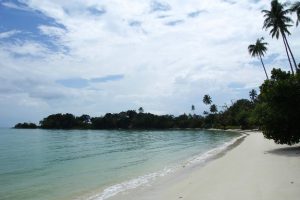 Pasir Panjang Beach has beautiful blue sea panorama. The wide beach makes the area comfortable for sunbathing or doing sport activities such as beach volleyball and beach football. The water on the beach is very clear, so it’s perfect for snorkeling or diving. Visitors can also surf, since the waves are relatively large.

In addition, visitors can observe the life of the fishing village community nearby. Pasir Panjang Beach has been equipped with appropriate facilities such as parking lot, rest rooms, hotels, cottages, restaurants, and souvenir shops. Pasir Panjang Beach is located at Singkawang City. It’s about 142 km from downtown Pontianak or 2.5 hours drive. The price of entrance ticket is Rp 10.000. Opening hour is 7 am – 6 pm. 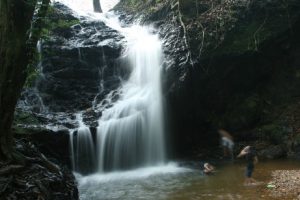 Tikalong waterfall has a height of approximately 5 meters, which is not too high. The waterfall also has a steady stream and clear water. Visitors enjoy the waterfall by playing water and taking pictures. Tikalong Waterfall becomes a favorite tourist spot because of its location which is easy to reach.

In addition, the forest around the site is still beautiful and provides a cool atmosphere. Tikalong Waterfall is located at Tunang Village, Regency of Landak. It’s about 100 km from downtown Pontianak or 3.5 hours drive. The price of entrance ticket is Rp 5.000. Opening hour is 8 am – 5 pm. 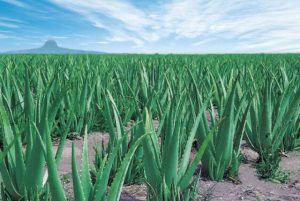 Pontianak city has a peat soil structure that is suitable for the growth of Aloe Vera. Therefore Aloe Vera Center was established in 2002. The place was built on the cooperation of municipal government with R&D Agency of West Kalimantan, also the participation of the central government.

Aloe Vera of Pontianak is included in Aloe Vera Chinese type. This type of Aloe Vera can be harvested for 12 to 13 years. Along with the advancement of science and technology, Aloe Vera is developed as raw materials for the pharmaceutical and cosmetics industries, as well as food and health drinks.

In this Aloe Vera Center, visitors can taste and see how the Aloe Vera plant is processed to become flour and various kinds of special foods, such as dodol, jelly, chocolate, Aloe juice drink and tea. Aloe Vera Center is located at Budi Utomo Street, North Pontianak. It’s about 8.5 km from downtown Pontianak. Opening hour is 9 am – 5 pm. It’s free entry. 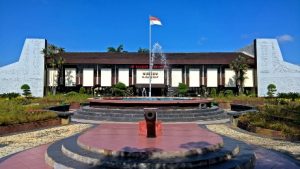 Also read : Things to Do in Pekalongan 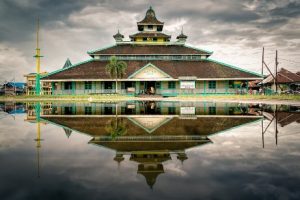 Jami Pontianak Mosque, or also known as Sultan Syarif Abdurrahman Mosque, is the oldest and largest mosque in the Pontianak city. The mosque was built in 1771. It can accommodate about 1,500 worshipers. The Jami Pontianak Mosque is supported on six main support poles. The distance of the floor with the ceiling is quite high, so that the air circulation becomes good.

The dome of the mosque is made of shingle. The shape of the roof is storied, the more upwards the smaller. Jami Pontianak Mosque is situated east of the Kapuas River, precisely in front of the Palace of Kadriyah Sultanate. It’s in Bugis Dalam Village, East Pontianak. It’s free entry and opening hour is according to schedule of worship.

Indeed, here are more top things to do in Pontianak Indonesia: 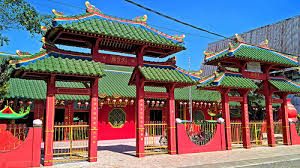 Bodhisatva Karaniya Metta Temple is the oldest temple in Pontianak city. The temple was built in 1829 and was renovated in 1906. The poles and frame of the building are made of ironwood and painted red and yellow gold. The gods of Khong Hu Chu are drawn in the three main doors.

There are sculptures and paintings in the walls and altars that depict the philosophy of life. Bodhisatva Karaniya Metta Temple is often visited every Chinese New Year and Cap Go Meh celebration. Visitors come from around Pontianak and outside the region. Bodhisatva Karaniya Metta Temple is located at Sultan Muhammad Street, Darat Sekip Village, Pontianak City. It’s free entry and opening hour is according to schedule of worship. 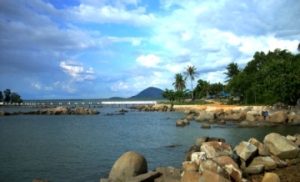 Sinka Island Park is an integration of several attractions, i.e. Sinka Zoo, Bajau Beach, and Simping Island. Sinka Zoo has hilly topography. The concept of the zoo is the same as in safari park. Visitors can get around seeing animals while driving. In addition, visitors are also allowed to get out of the car if they want to take pictures with the animals. The total collection of animals found in Sinka Zoo is about 275 pcs.

Bajau Beach has an unspoiled beauty. Visitors can enjoy the view of the beach by boarding a delman or horse that can be rented. Visitors can also try the banana boat game. Simping Island is the smallest island on earth. The island is connected by bridge to Sinka Island Park. Sinka Island Park is located at Malindo Street, Singkawang. It’s about 3 hours drive from downtown Pontianak. The price of entrance ticket to Sinka Zoo is Rp 10.000 and to Bajau Beach is Rp 20.000. Opening hour is 9 am – 5 pm.

Visit this place : Things to Do in Old Town Jakarta 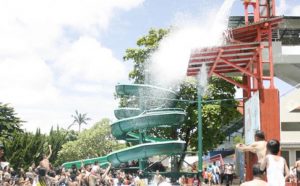 The pool for adults has a depth of more than one meter and is often used for competition. The pool for children has a depth of 80 cm. J.C. Oevang Oeray Swimming Pool is located at A. Yani Street, Pontianak City. The price of entrance ticket is Rp 20.000 on weekdays and Rp 25.000 on weekend. Opening hour is 6 am – 6 pm. 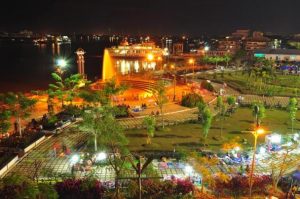 Kapuas Square Park is located in the middle of the city, so it’s always crowded by people. The park has a neat arrangement. Inside the park there is a beautiful fountain and a replica of Equator Monument. The Pontianak Municipality has expanded the Kapuas Square Park area. 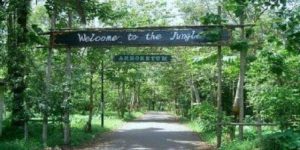 The city forest, or Arboretum Sylva Untan, is situated in Tanjungpura University Campus (Untan) and managed by students of Faculty of Forestry. The city forest has an area of 3.2 hectares. Its collection is very diverse ranging from special plant of West Kalimantan, mammals, birds, to insects.

Besides being a place of biodiversity, the city forest also serves as a place of recreation for the community. They can do outbound activity, jogging or even cycling. The city forest (Arboretum Sylva Untan) is located at Jend. Ahmad Yani Street, Pontianak City. Opening hour is 8 am – 5 pm and it’s free entry. Ok friends… Now you know the top things to do in Pontianak West Kalimantan Indonesia. Let’s hit the road…

12 Top Things to Do in Sumbawa Indonesia

12 Top Things to Do in Banyuwangi Indonesia

15 Heavenly Things To Do in Singkawang (#Must...